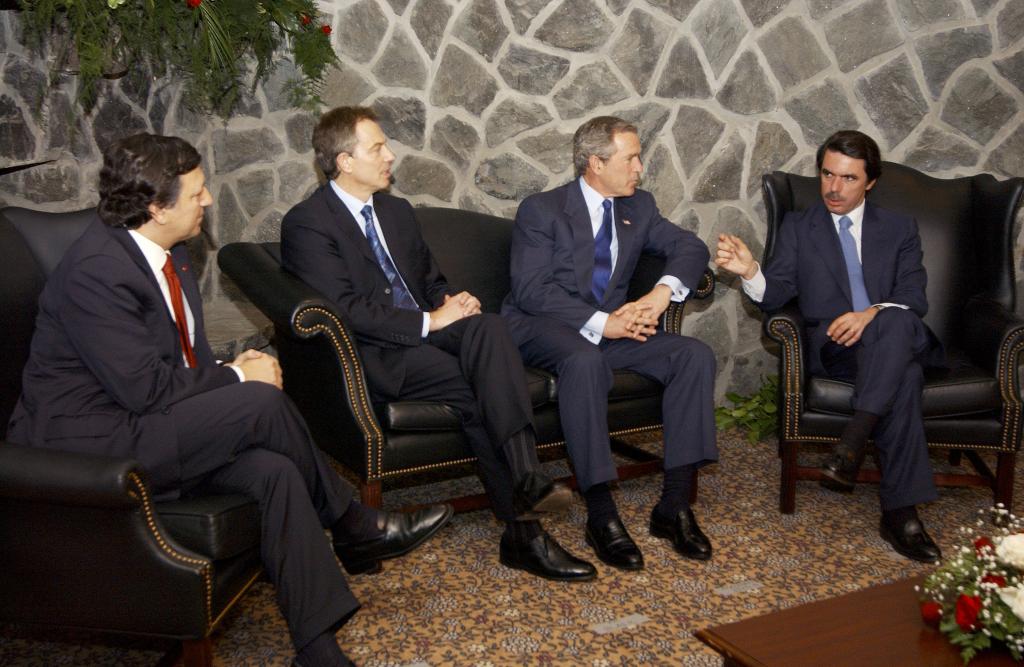 The former Portuguese PM and European Commission President, José Manuel Durão Barroso, emerges as an accomplice of the great atrocities of the war in Iraq and its lingering consequences.

Since mid-September 2016, the Portuguese Foreign Affairs Parliamentary Commission has been trying to contact former Portuguese PM and President of the European Commission José Manuel Barroso, in order to obtain an official testimony over the Lajes Summit that took place on the Portuguese island of Azores on 16 March 2003, a few days before the US-led coalition invaded Iraq. But the former Portuguese leader Barroso keeps silent.

The former Defense Minister Paulo Portas and former Foreign Affairs Minister Martins da Cruz have also been sought by the commission. Also unsuccessfully. They are allowed to refuse a testimony and the request has no binding force.

The “emergency” Azores Summit took place in a critical time, when Washington and London were still far away from getting the votes they needed to pass the United Nations draft resolution 1441, which demanded Iraq’s disarmament and ultimately gave the “green light” to the invasion. Hence, the diplomatic meeting brought together the three resolution’s cosponsors — US, UK and Spain — to seek a quick strategy for gaining further support.

This forgotten summit, sponsored by Washington, was ultimately successfully, since it kicked off the US-led intervention in Iraq, which counted with ground fighting support from British, Australian and Polish troops. Spain offered non-combat support in the form of medical teams and experts in contamination, while Portugal assisted with political support.

In the middle of the Atlantic Ocean and far away from mass protests against the imminent foreign invasion, the four former leaders reached an agreement over what was to become a bloody page in history, triggering a slaughter in the Middle East and left the countries of the region in chaos up until today.

US President George W. Bush, British PM Tony Blair, Spanish PM José Maria Aznar and the host José Manuel Barroso considered the outline of the intervention under the false premise that former Iraqi President Saddam Hussein was in possession of weapons of mass destruction (WMD). Both Bush and Blair have been criticized for their role in the intervention in Iraq. Now, the Portuguese Parliament wants to also hear from the Portuguese officials what exactly had happened during the meeting.

Chilcot Report on the “unnecessary war”

The official request came from the Portuguese Communist Party two days after the UK published on 6 July 2016 the 2.6-million-words-long Chilcot Report, named after the chairman of the public inquiry, Sir John Chilcot. The report condemned the British government’s role in the Iraq war: the very decision to go to war, the deployment on the ground and its non-existent role in post-war support.

In the summary, the bulky inquiry confirmed that Saddam Hussein did not pose a threat to British national security and interests; that intelligence regarding WMD was presented with unwarranted certainty; that peaceful and diplomatic solutions to war had not been exhausted; that the UK and the US undermined the authority of the United Nations Security Council; and above all that the war was unnecessary.

The report’s publication sparkled a great deal of indignation amongst the media. Arshad M. Khan couldn’t hide his anger when writing for Global Research the article “Elite Impunity and Chilcot Report – Will Tony Blair Ever Go to Jail?” The author is sceptical of any future law enforcement — bringing the findings before the courts and indicting those responsible — and makes a compelling case against Blair and his partners for the “unbelievable mess that is now Iraq”.

“What stands out in the British Iraq Inquiry report is the sidestepping of the war crime issue. But then it was carefully placed outside its scope. This omission aside, the indictments remain, damning and morally appalling. Thus it confirms the war was launched on a false pretext,” wrote Khan. “Is a US president immune, or is any sitting president afraid of setting a precedent?”

Blair was Bush’s loyal serf. Eight months before the war, Blair the hawkish vassal told Bush in a secret memo: “I will be with you, whatever comes.”

Indeed, Blair blindly pursued the White House’s goal of regime change in Iraq regardless of its tragic outcomes. “The topsy-turvy post-9/11 rationalisation for regime change from the chauvinist, parochial and sometimes proudly ignorant George W. Bush White House produced predictably topsy-turvy results,” wrote the Guardian’s editorial. Moreover, the rise of the Islamic State was attributed with high likelihood to Blair jointly decision on intervening in Iraq. “Jihadi forces that Saddam Hussein had contained were not discouraged by his ousting, but greatly emboldened.” Overall, “a country ruined, trust shattered, a reputation trashed,” denounced the British paper.

On a similar note, Al Jazeera accused Blair of having underestimated the consequences of the Iraqi invasion noting that his actions were based on “flawed intelligence”. Mehdi Hasan, a British political journalist argued that even before the Chilcot Report was made public there were clear examples of Blair’s deception. In a news video entitled “The Iraq war: Did Tony Blair deceive us?” Hasan goes on saying that no inquiry was necessary for the general public to know that “the Iraq war was a catastrophic disaster” and that the UK was “lied into it”.

Blair misled the public, clinging on the claims that Saddam Hussein had “stockpiles of WMD” — claims that, according to the Chilcot Report, were “presented with a certainty that was not justified.”

The story gets even more Machiavellian, though. A documentary film produced by Guardian Films in March 2006, “Iraq’s Missing Billions”, conveys a disturbing tale of corruption and fraud. After having pursued the regime change motto and overthrown Saddam Hussein, both the British and the Americans were given a delicate responsibility by the United Nations. They became responsible for guaranteeing that around $20 billion belonging to Iraq’s public safes were to be used by and for the Iraqi people. However, this large amount of money simply “disappeared”.

In the film, Frank Willis, a senior member of the Coalition Provisional Authority (CPA) that governed Iraq after the invasion, headed by US Ambassador Paul Bremer, confessed that as trustees, they did “a very poor job”: “We should have spent the money on Iraqi people, rather than putting it in the pockets of foreign business.” Before shooting the documentary, the Guardian had done research on the vanished money, posing the question “So, Mr. Bremer, where did all the money go?” as early as 2005.

Overall, KPMG’s auditors have found that a massive corruption scheme, built on ghost workers, bribes and intimidating practices, was put in place by the very same nations intended to “liberate” Iraq and its people:

“The auditors found that the CPA didn’t keep accounts of the hundreds of millions of dollars of cash in its vault, had awarded contracts worth billions of dollars to American firms without tender, and had no idea what was happening to the money from the Development Fund for Iraq, which was being spent by the interim Iraqi government ministries.”

The trail of destruction on Iraqi territory was appalling. After the US-led intervention, public services became extremely deficient. Supply of electricity, clean water and oil became intermittent leaving populations in inhumane conditions. Access to and quality of healthcare services were highly compromised with severe shortages of medical devices and supplies. All of this remains a gloomy reality in today’s Iraq.

The problems with the wars on terror

The famous “war on terror” conducted by the Western allies left death, destruction and a power vacuum in Iraq. These military interventions led to the rise of radicalization and, eventually, to the consolidation of the so-called Islamic State in Iraq and Syria (ISIL), triggering a massive refugee crisis into Europe — the biggest humanitarian crisis since World War II.

Indeed, it was a fact that rulers like Saddam Hussein and Muhammad Gadhafi, stood atop violent and repressive autocratic regimes. Nevertheless, they had maintained at least a degree of stability, safety and decent living for their people. No nation should be allowed to meddle in the affairs of another sovereign nation, certainly not in this self-serving, unaccountable and, ultimately, counterproductive fashion.

The Belgian journalist Michel Collon challenged the West’s pretension of assuming a worldwide leadership in global affairs. After all, it is of no coincidence that primarily oil-rich countries, like Iraq and Libya, tend to come into the spotlight of the international community. Collon also claims that the West had hidden reasons for pursuing a military intervention in Libya. He argues that Gadhafi’s decision to nationalize Libya’s oil was not welcomed by the Western coalition.

One must also question the double standards that the US, UK and their NATO allies have with regard to Saudi Arabia. How legitimate is it to condemn the acts of some oppressors, while closing eyes to similarly extreme violations of human rights in different countries? The answer lies in the extent to which the West can count on the precious resources produced by these not-so-different states. While the trade between Saudi Arabia and the US, France and the UK is predictably smooth, both Iraq and Libya “needed” a regime change to “facilitate” the trade.

As we see report after report slamming former politicians and their foreign policies, it still seems that the impunity is here to stay. The Bush and Blair warmongers duo’s connection to the catastrophe in Iraq (and Afghanistan) will go down in history. Yet, they have never been formally accused for crimes against humanity. David Cameron won’t be forgotten for his irresponsible and negligent behaviour in Libya.

Barroso too remains their undeclared accomplice, at least by association.

The two deadly sins of greed and power-hunger have become accepted qualities of modern leaders. This does not mean, however, that morality and ethics are irrelevant or obsolete.