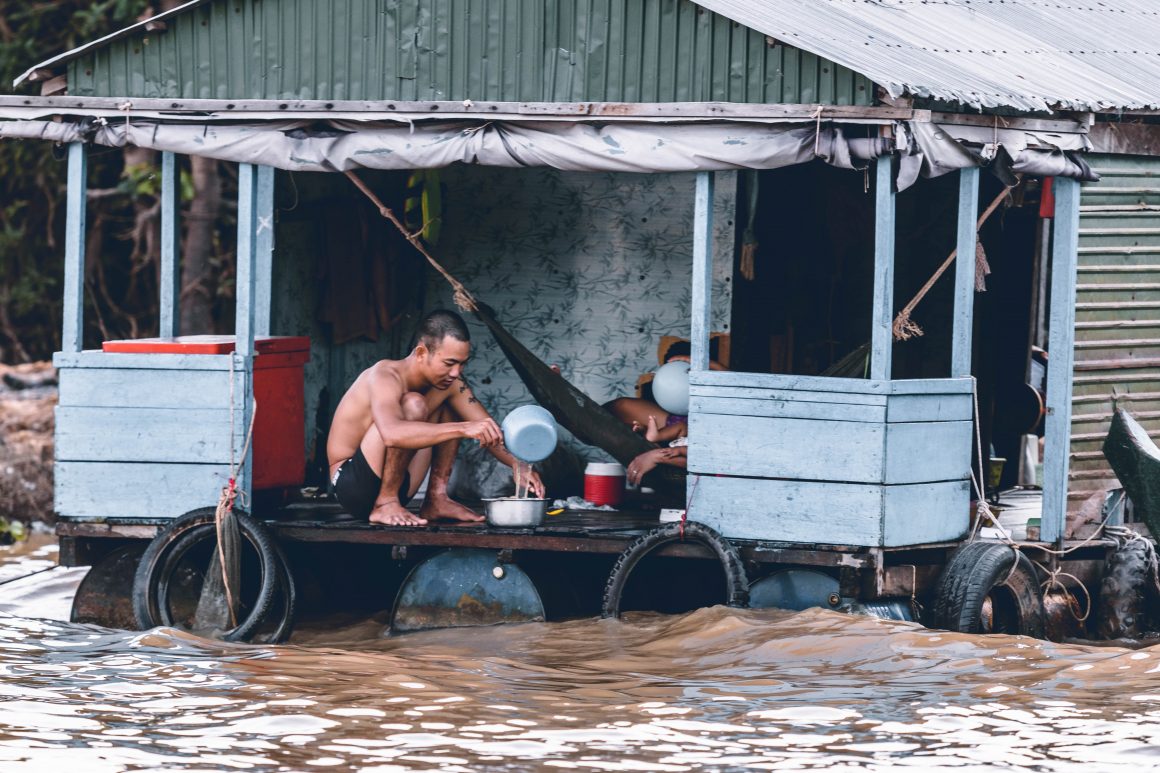 Photo by Hitesh Choudhary from Pexels

This is a republished version of the original published article on the Our World Too website, which you can access here

Natural disasters are becoming more and more devastating and the livelihoods of large numbers of people, especially in vulnerable rural societies, are being threatened. Climate change is already impacting the migratory behaviors of people that will try to escape these increasingly unbearable situations. The Intergovernmental Panel on Climate Change has called climate change a “threat multiplier”. Indeed, extreme weather events such as a rise in sea-levels, floods, hurricanes, droughts, and heatwaves have resulted in water scarcity and loss of arable land which, in turn, has forced millions of people to abandon their homes either moving to another region within their home country or by seeking refuge outside its borders.

“The issue of environmental refugees promises to rank as one of the foremost human crises of our times,” said Norman Myers, one of the most-cited researchers on climate-induced migration. This statement was made in 2005 at the 13th Economic Forum in Prague, and today, 16 years later, it is more accurate than ever.

International migration has always been a coping mechanism, a voluntary or involuntary strategy adopted by people as a possible solution to the deterioration of their quality of life. One of the primary push factors for migration is the desire to improve one’s financial and professional situation and contains a sense of volition in one’s choice to leave their home or habitual place of residence. However, a more “multifaceted” analysis of the present migratory flows indicates that some of these journeys are largely affected by the environment as well.

The International Organization for Migration (IOM) estimates that by the year 2050, the numbers of environmental refugees will vary from 25 million to 1 billion. These figures include the people that will be displaced internally or across international borders and their migration might be of permanent or temporary nature. Currently, the most broadly accepted estimate is that the number of environmental refugees will amount to 200 million people.

While there is no consensus on the exact number of people who will be affected by climate change. Whether it will be closer to 25 million or 1 billion people, these numbers can only mean one thing: no matter how real climate change is, no matter how many people have lost their livelihoods and were forced to abandon their homes because of it, we are still not treating it as a crisis.

This is further confirmed by the lack of a globally accepted, legal term to describe the status of people that have been forcibly displaced due to climate change and excessive natural disasters. Academics, researchers, social scientists, and associations active in the field of environmentally induced displacement insist that on top of all the issues that come alongside climate change, the lack of recognition of the environmental refugee problem by governments and international agencies is aggravating it.

There is still a significant shortage of quantitative data collected regarding movement associated with environmental change, creating a key gap between the reality that climate refugees experience and the legal context and mitigation measures that should be established.

International governance is being challenged by the need to provide protection to environmental refugees in the context of such global environmental threats. The absence of a legal instrument dedicated specifically to this issue, which would ensure the protection and well-being of the affected individuals or groups of people, proves to be a challenging issue at stake and, as a result, the rights of refugees and the corresponding states’ obligations applicable to this situation are neither identified nor ensured. According to Cournil, the issue requires a cross-cutting approach of which the national and regional frameworks fall short in their various partial and fragmented responses.

Not only is there a lack of an international framework for environmental refugees, but there is no consensus about their existence.

Currently, the most pressing issue according to official standings about environmental refugees is the lack of a unique institutionalized term for them. The 1951 Geneva Convention, which identifies a refugee as a person who ”has a well-founded fear of persecution for reasons of race, religion, nationality, political opinion or membership in a particular social group”, was drafted more than half a century ago; even if one argues that the Convention and its Protocol are still as relevant as they were back in 1951 and 1967, respectively,  is there anyone that could argue that the international context has remained the same?

In the literature, there is no real distinction between refugees and migrants because we insist on trying to define this modern-day forced movement phenomenon with concepts and terms that go back more than half a century when climate change wasn’t on anyone’s radar. The lack of consensus around a common definition today prevents any debate on the subject. Most definitions are based on the origin of environmental degradation, distinguishing people pushed into exile by a sudden change in their environment from those that have thought long and hard before making the decision that stems from many factors.

In today’s world, how easy is it to distinguish between a prepared and planned migration and an urgent evacuation?

It is becoming increasingly difficult to draw a line between the two types of mobility as environmental threats gradually increase, leaving little space for choice. Furthermore, it is not only the brutal and sudden environmental phenomena that lead to forced migration but also slow-onset processes, such rising sea-levels, and droughts, making it all the more challenging to find whether there is a causal link between environmental plight and environmental displacement, and therefore to categorize them and bridge the legal and protection gaps that exist.

As UN Secretary-General António Guterres stated, “Climate change [is] now found to be the key factor accelerating all other drivers of forced displacement. These persons are not truly migrants, in the sense that they did not move voluntarily. As forcibly displaced not covered by the refugee protection regime, they find themselves in a legal void.”

Small steps towards the right direction

In 2005, Myers suggested that “if famine has been human-made, it can be human-unmade, whereas natural factors can only be managed and accommodated”. However, the international community should not only focus on climate prevention and adaptation; there are millions of people already displaced due to climate change and environmental degradation who are in despair and need the international community’s help, support, and protection.

In 2020, a French appeals court made legal history by approving the renewal of a Bangladeshi man’s residence permit on the grounds of environmental degradation in the applicant’s country of origin. The appeals court in Bordeaux overturned the deportation order against a 40-year-old Bangladeshi man, known in the media as Sheel, who suffers from severe asthma and sleep apnoea. Sheel first arrived in France in 2011 and immediately applied for political asylum. After his application had been rejected, in 2015 he obtained a temporary residence permit which is only granted to foreigners with health issues for which they cannot receive proper treatment in their country of origin. However, in 2017, the French government’s medical advisory team argued that he would then be able to receive adequate treatment in Bangladesh, thus leading to a deportation order in 2019.

In 2020, the case was brought before a lower court in Toulouse which rejected the government’s deportation order based on the arguments presented by Sheel’s lawyer, Ludovic Rivière. Rivière argued that, in addition to Sheel receiving poor treatment if he were to return to Bangladesh, his condition would worsen due to the high level of air pollution in the country. Nevertheless, the French government decided to appeal bringing the case before the Bordeaux Court of Appeals which not only affirmed the lower court’s decision, but also took it a step further by recognizing that solely the environmental criteria presented in the case were sufficient to put Sheel’s life at risk, and thus placing a ban on his deportation.

While Sheel is not officially recognized as a climate refugee and we still have a long way to go, this was the first-time environmental degradation was evoked as the leading argument for a court’s final ruling. Hopefully, Sheel’s case can serve as a legal precedent that will encourage similar rulings in the future and put the necessary pressure on courts and governments to seriously consider environmental issues in the context of forced migration.

82.4 million people are forcibly displaced due to climate, conflict and persecution, a four percent increase during the Covid-19 pandemic, yet 160 States closed their borders, 99 making no exceptions whatsoever for international protection. This meant many who ought to have been protected were expelled, facing harsher restrictions in global lockdowns.

For humanity to stop failing its people, it needs to change its narrative. Climate refugees, who could very possibly be the future versions of ourselves, cannot wait any longer for the world to see them.