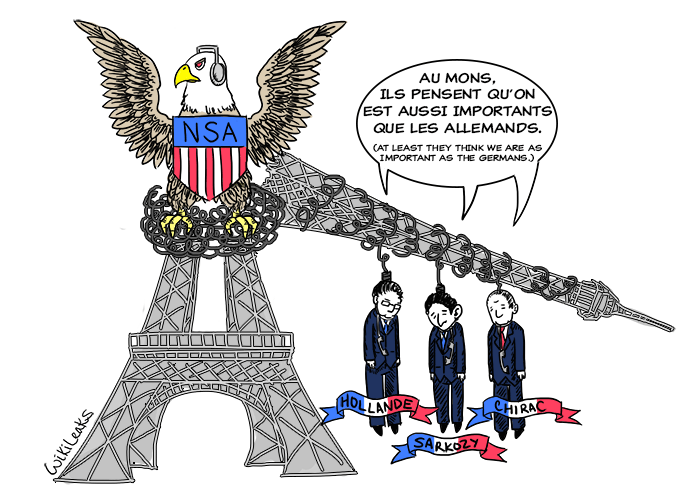 The US intelligence establishment must have been very confident that their surveillance methods would never be discovered by the surveilled individuals in order to risk wiretapping European leaders. Otherwise, it is difficult to understand how on earth they decided to gamble those relationships with some of their closest European allies in exchange for information obtained from phone conversations of Hollande, Sarkozy, Chirac or, as revealed some time ago, Merkel. They calculated wrong. Obviously they didn’t see Wikileaks coming—maybe they are not that intelligent after all.

If their closest friends are on their wiretap list, who is not? Certainly their enemies are, from Bashar al-Assad to Vladimir Putin, except that these individuals are fully aware and take precautions. Who else? The British Queen? Ban Ki-moon? The King of Spain? The Pope? Madonna? Basically everybody is in the NSA’s telephone book (and in many other special services’ books). You and me too. Though some receive more attention than others and, most likely, the French presidents were VIPs on the list.

The American excuse is that everybody does it. Well, maybe not everybody has the same technological capacities, so it would be more accurate to say that everybody who can do it does it. The mayor of Paris, Anne Hidalgo, takes it for granted that private communications are not as confidential as they should be and has said that the only response is to be very careful with what one conveys over the phone. The paradox of our time: we have more means of communication than ever before but, if we really want to communicate serious matters, we better talk face-to-face in a crowded coffee shop.

To the general public, many questions arise. What kind of information was collected from the French presidents? The answer is: everything, from Hollande talking to CEOs on industrial plans, to Sarkozy chatting with Carla Bruni. If all that information is collected, someone must listen to it. Who is it? Who decides what is valuable and what is not, from an intelligence perspective? The likely answers are that many people listen and everything is valuable—you never know when it will be the time and/or the reasons to use it; national security justifies anything. But where is it stored? And for how long?

Did the US president know that his European colleagues were being tapped and authorised it? This question has no good answer. If he did, it would reveal that the level of hypocrisy of the American presidency knows no limits. If he didn’t, it would illustrate to which extent the US secret services behave independently of the presidency and breaks the link of democratic accountability. In both cases, the democratic credentials of the US are seriously tainted.

President Obama has said it will not happen again, but it sounded more like a policy, whose results cannot be guaranteed, than an executive order. It seems that the capacity of the President to affect the behaviour of the secret services is similar to the one he has to affect the economy or the financial markets: he tries to orientate them in a given direction but does not have full control over them. The question remains whether Obama would have taken the same course of action had he not been caught in flagrant délit.

Above all, this episode illustrates how much international affairs are dominated by secrecy, lies and hypocrisy. In every public statement, every press conference, every exchange of views by top leaders, there are more lies than truths and more kept secret than said publicly. At the same time, these very people, at least in the democratic world, speak constantly in favour of transparency, honesty in public affairs, morality, values, democratic accountability, and so on. For the realists, this is the way things work and have always worked. There is nothing wrong with it, as there is no better alternative: you try to out-cheat the others as they try to out-cheat you (you do it for your country, after all), everybody spies on everybody else, everybody lies, and the world goes on in the least bad possible way. But for many people this is not a reassuring thought. One wonders what would happen if this way of thinking spread across society, beyond politics, finance and international affairs.

There are several intelligence agencies around the world, many of them headquartered in the US, which make use of the vastly developed technology of the digital age to spy on millions of people, who are not even considered terrorism suspects. The most (in)famous agency as such would be the NSA (National Security Agency), which uses a pretty smart foundation of ‘legal’ activities to justify its actions.