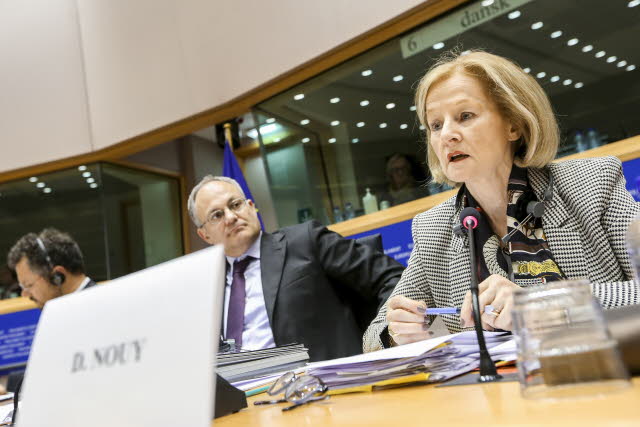 In the European Parliament the head of the Single Supervisory Mechanism (SSM) for the Eurozone banks has committed herself to restraining financial institutions and closely monitoring the models they use to calculate risks. Danièle Nouy has given assurances that “we will be a demanding supervisor, however at all times we shall strive to make our action fair and impartial.”

In the first report from the authority that has overseen more than 6,000 banks in the region since last November, Nouy noted that the SSM “will not shy away from undertaking intrusive and direct supervision”. She also stressed the rising default in the financial industry, coming particularly from businesses.

The European Central Bank (ECB) is not losing sight of “aggressive strategies adopted in search of returns in order to identify lax lending standards,” said Nouy, referring to risk-taking in investing for profit in an environment of low cost loans which bring down the return.

In this sense, the chairwoman of ECB banking supervision has warned of “a particularly high level of exposure to the corporate segment, where past due exposures are increasing steadily.” The Eurobank’s surveillance unit is monitoring the countries most affected by the crisis because “they are the most likely to see corporate bankruptcies”.

In addition, the SSM is analyzing the models used by banks in their risk departments, given the approach they adopt to calculate the capital they need to cover potential losses on their lending. Nouy has called for a “greater consistency” for these models.

The head of the ECB’s supervisory body has also warned that the current “political uncertainty” in Greece is undermining progress made so far in the recapitalization and restructuring going on in Greek banks, and has called for a “rapid” agreement between the new SYRIZA government and its creditors. “The Greek banking sector is now in a position of solvency which is much better than in previous years,” Nouy maintained, during her appearance before the EP’s Economic Affairs Committee. “This progress has now been overshadowed by the increased political uncertainty the country is facing,” said the French banker.

The outflow of deposits from Greek banks in the first two months of 2015 exceeded €20bn euros, according to data from the ECB, a figure equivalent to 11% of GDP (Gross Domestic Product) estimated for Greece in 2014 by the IMF (International Monetary Fund).

Who is Danièle Nouy