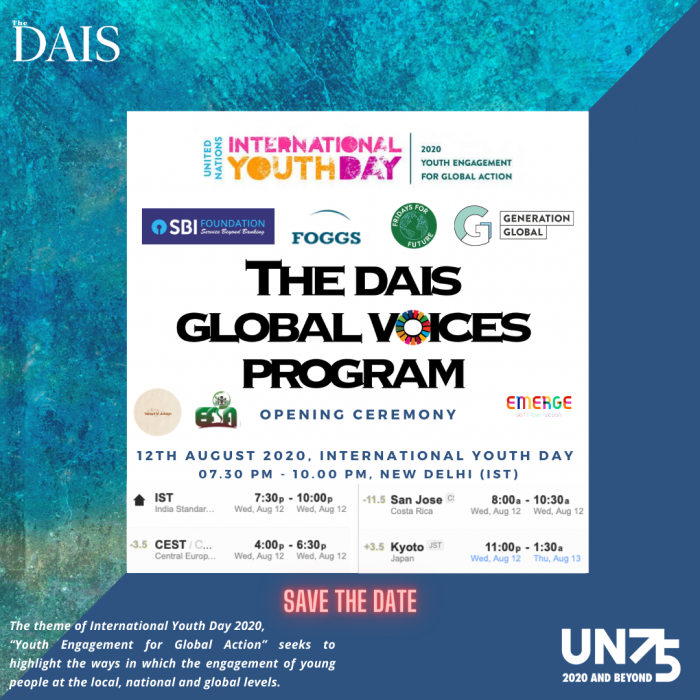 This is the year of the UN’s 75th anniversary (“UN75”), basically 75 years since the end of World War II. It has been a turbulent 75 years. No new world war but a serious Cold War and many regional confrontations costing the lives of millions. When the UN was created in 1945 it had only 51 member states. Following decolonisation and the dissolution of the Soviet Union and Yugoslavia it now has 193 member states. In 1945 two atomic bombs were dropped on Hiroshima and Nagasaki causing carnage and long-term ailments among the local populations. Thankfully there has been no further atomic bomb use since, but there are at least nine declared and undeclared nuclear powers in uneasy relations compared to only one, the USA, in 1945. The Holocaust marked the ultimate moral bankruptcy of Nazi Germany and became a story of horror never to be repeated. Despite that genocide has reappeared, in Rwanda, Srebrenica and Myanmar among other places, showing how inhuman humans can be.

Technology has skyrocketed in the last 75 years, literally sending rockets to the moon, Mars and beyond, and connecting the world through the Internet, computers and smartphones, TV and all other tools of the digital revolution. The average person has more material goods to satisfy her/his needs but in the process of producing those the environment has suffered, air and water have been polluted, the climate is changing fast causing destructive weather events. On a planet with almost 8 billion people destined to grow even further in numbers natural resources are dwindling, and food and water security are not guaranteed. The predominant ideology that moves the globalised economy prioritises the private versus the public, celebrates extreme profit-making while paying lip service to social responsibility and solidarity, allows extreme inequalities to get even bigger, while spreading relative poverty and insecurity among the masses, even the formerly affluent middle classes of the so-called developed world.

To celebrate the achievements and map a course to deal with the many challenges that will determine humanity’s and our planet’s future, the Foundation for Global Governance and Sustainability (FOGGS) has embarked on a far-reaching partnership with The Dais, a New Delhi-based and globally active non-profit that shares the ethical values and humanist orientation of FOGGS, the parent organisation of Katoikos. As a first joint undertaking, and together with other partners, we are going to hold a series of online dialogues that engage senior experts and young professionals / activists from around the world. The intention is to mark UN75 through action-oriented discussions that promote the implementation of the 2030 Agenda and the Sustainable Development Goals (SDGs). Together we will also accelerate the construction of a much-needed new narrative for a new world that should take hold in the UN’s next 25 years, building on the Grand Narrative for a fair, inclusive and human-centred globalisation put forward by FOGGS.

The COVID-19 pandemic and the rethinking that it has forced on countries, organisations and individuals, as well as the tsunami of online consultations that it has released, have helped accelerate this process. The Dais – FOGGS partnership helps Katoikos fulfil its mission as a digital community-building project for the conscious citizens of our world. We will soon open on the Katoikos homepage a new section called “The UN75+25 Generation” as a space for you all, especially the younger members of our community, to exchange ideas and views on the creation of the new narrative, as well as on the implementation of the 2030 Agenda, addressing global challenges like climate change and pandemics, and reforming the UN and other global institutions. We are looking forward to your inputs either using the “Comments” function at the end of this editorial and other published articles or by sending your original pieces, preferably up to 500 words, to info@foggs.org

Join us for this exciting adventure that will help shape a world worth living and thriving in, and participate in the upcoming discussions, the first of which will take place on International Youth Day 2020, as per the attached announcement. Be an active member, thinker and doer of the UN75+25 Generation!!!

This article attempts to observe and reflect on the eco-system of violence & education with reference to youth education in conflict regions & special focus on Afghanistan.   Covid-19 Pandemic: 9 Billion Realities The Covid-19 pandemic over the past two years has hit all walks and areas of life deeply, widely and comprehensively. The reaction,…