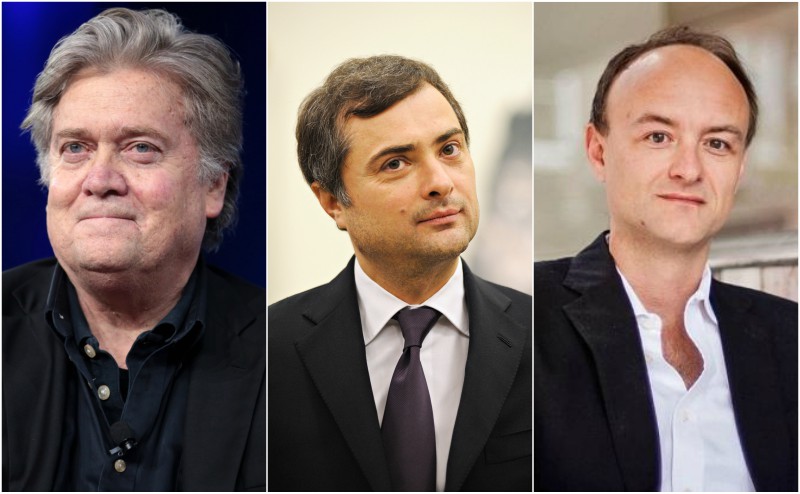 I’ve seen several headlines comparing Steve Bannon, Trump’s Chief Strategist, to the Mad Monk Rasputin, given the coincidence of their seemingly hypnotic influence over the country’s most powerful man and their apparent commitment to arcane forms of Evil. Rasputin also has a counterpart in contemporary Russian politics, in the form of Vladislav Surkov, ‘Putin’s grey cardinal’, a figure who, according to the Atlantic, “has directed Russian society like one great reality show”, often using bizarre means of discrediting anyone who stands up to the Government. A meeting between Bannon and Surkov would put Malcolm Tucker and Jamie from ‘The Thick of It’ in the shade.

Although Tony Blair’s Press Secretary Alistair Campbell was the model for Tucker, his bullying and lying could hardly be called psychopathic, and he seems to have been driven by loyalty and career progression rather than destructive zeal even as his dishonesty and cynicism destroyed the Middle East. The same could not be said for someone who, although he is no longer on the scene, has also had a decisive influence on world events: Dominic Cummings, former adviser to the failed Geek Emperor Michael Gove and, as head of the pro-Brexit camp in the Referendum, originator of the slogan ‘Take Back Control’.

Cummings has been described by David Cameron as a ‘career psychopath’ and by Rachel Johnson, sister of Boris, in similar terms. I urge you to read in full Pat Kane’s assessment, in which he calls Cummings an “intellectually committed chaos-merchant” and reports on his mission to subject all aspects of human behaviour (health, education, all public services) to the capricious and/or sadistic whims of the market. This may not suit everyone, but Cummings believes most of us to be a waste of education, as cognitive ability is primarily related to genes. This throwback to early 20th Century ideologies is currently off-stage, back to writing deranged screeds on his personal website, but the ideas he promotes are clearly of influence on a Government which has no better idea than rip-it-up-and-start-again.

Bannon, Surkov and Cummings may have different visions of a perfect society, but they share a commitment to elite rule and an idea of how to aggressively pursue it.

Figures like Bannon, Surkov and Cummings may have different visions of a perfect society, but they share a commitment to elite rule and an idea of how to aggressively pursue it: by creating chaos, using what Rebecca Solnit (in one of the best assessments I’ve yet encountered of why Trump won) describes as ‘gaslighting’ to destabilise accepted values and undermine trust in established institutions. I found out about Surkov through Adam Curtis (a very skilled propagandist in this own right), who in his film Hypernormalisation (2016) says that Surkov has “turned Russian politics into a bewildering, constantly changing piece of theater … (creating) a constant state of destabilized perception, in order to manage and control”.

Then there’s the question of which ideology they adhere to. Bannon recently claimed to have once been a Leninist but has very clear fascist and possibly Nazi sympathies. Surkov’s inspiration apparently comes from contemporary art, and both he and Bannon have been associated with the fascist Russian ‘philosopher’ Alexander Dugin, who believes Russia should provoke an all-out world war. As for Cummings, despite his intellectual posturings, he may be stupid enough to be a fan of that ultimate Godhead of failed teenage bullies with megalomaniac pretensions, Ayn ‘Medicare’ Rand. He is an extreme Neoliberal and a reminder that the origins of Neoliberal thought lay partly in nazi belief in the purity and goodness of elite power.

Another common comparison for Bannon has been Joseph Goebbels. The Nazi propaganda leader was notoriously interested in and inspired by mystical beliefs and occult rituals. The Trump phenomenon has partly been explained in terms of a hypnotic effect, not least by (stranger and stranger…) Dilbert cartoonist Scott Adams. The (mock?) science of Neurolinguistic Programming may partly explain why, according to several reports, people went into Trump’s rallies curious and came out fuming. Conspiracy theorists find consolation in the belief that all world events, from Brexit to Trump to the war in Syria, are controlled by the CIA; it’s comforting to think that someone’s there behind the scenes watching and learning and will step in when things get out of hand.

One thing people like Surkov do is to learn from recent developments in marketing and apply them directly to politics. What’s happening politically in the UK, the US and elsewhere is by no means detached from what’s going on in the economy. We are subject to massive and increasing manipulation in the form of disruptive technologies, such as Airbnb and Uber, many of whose creators believe that disrupting settled industries and tearing up patterns of social behaviour is an end which justifies all means.

That ultimate agent of chaos Donald Trump certainly has a way with a crowd, but he’s also stupid and helpless when it comes to understanding world events. He seems to accept the simplest and most misleading of explanations of TV commentators. He appears to have no-one to trust and doesn’t seem to have any idea what he’s doing beyond acting out his most sadistic impulses. It may be that he thinks Steve Bannon is his only friend. Bannon certainly appears to know how to manipulate his charge. The plot of this contemporary dystopian parable is starting to resemble Frankenstein, but in this version the Doctor doesn’t care about the consequences of what he’s created, and instead is urging the monster out of the castle to attack the village and take over the world.

Rasputin’s contemporary counterparts may look and feel like protagonists making their own rules but in reality they are obeying deeper and darker forces which may well destroy them.

Rasputin, of course, ended up being shot dead and thrown into a river, partly undone by his own drunken boasting. As for his contemporary counterparts, they may look and feel like protagonists making their own rules but in reality they are obeying deeper and darker forces which may well destroy them. All of them appear to be deeply narcissistic and probably enjoy being talked and written about, even though it’s public knowledge that Bannon is a wife-beating drunk, Surkov a failed novelist and pictures of Cummings show him posing like a pitiful pastiche of the Bullingdon crew. Maybe he was the one who cleaned up after their parties. Ultimately the three ideological psychopaths I’ve talked about here are not masters, but servants of (to quote Thomas Pynchon in ‘V’) a much more ominous logic.

For the full version of the article go to Richard’s blog. Republished with the author’s permission.