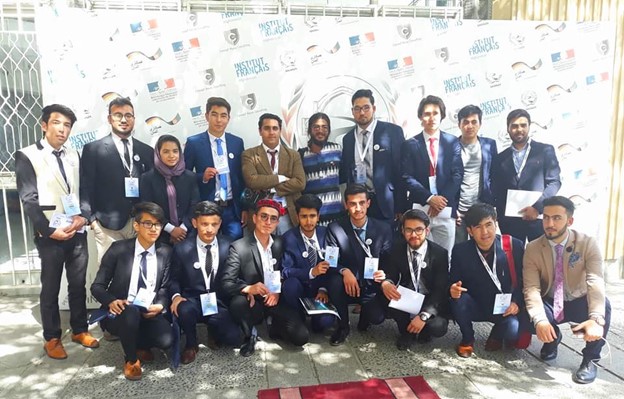 French Cultural Centre, Embassy of France, Kabul / With Youth from Schools and Universities from Afghanistan

In April 2018, at New Delhi International Airport, I boarded the flight heading to Kabul, along with a couple of my colleagues from The Dais. Initially filled with excitement as I entered the flight, the realization that I was going to Afghanistan sunk as I boarded the flight and saw before me a plane filled with Afghan men and select few women clad in Hijabs, murmuring to each other as we walked down the aisle. I remember feeling a sense of awkwardness and discomfort in that moment, not least because I did not understand the language of the land to which I was travelling. I started wondering if it was the right decision to travel to Kabul, leaving behind the safety of New Delhi.

I was heading there as a part of a collaboration between The Dais and a Youth-led International Conference. I would be facilitating a simulation of the UN Economic and Social Council for the youth group to enable them to discuss development challenges faced by Afghanistan. As our short flight to Kabul began its descent towards the airport, my thoughts were interrupted by one of the most beautiful views in the world. The stunning visage below took my attention away momentarily from the chaos that had already begin to clutch at my mind as we had started from Delhi.

Kabul Airport, now globally known to everyone as a symbol of the withdrawal of the west, ever in a state of total chaos as people run for their lives, was my first point of entry to the Afghan land. Three years ago, however, things were different. About ten seconds prior to our flight reaching the landing pad is when the truth of our destination finally set in. Never in my life had I seen military helicopters next to commercial flights, yet such a view greeted me as we landed and the seriousness of the situation in which I found myself finally dawned upon me. We had arrived.

Seven airport security checkpoints later, we exited Kabul Airport and we were received by the young, extremely smart, well-spoken, warm, enthusiastic organizers of the conference. This was the real starting point for my discovery that Afghanistan, in truth, exists beyond all the stereotypes and is so much more than images of war, discrimination, and violence. Hope, aspiration, and love are the three words I have associated with my Afghan partners and friends since that day.

However, even in the presence of immense warmth, you can’t escape the conflict once you are in Kabul. The streets are filled with pickup trucks, augmented with gun-stands, and there are several check-points across the city. Not to mention the ever-present zeppelins in the sky that never let you forget where you are and what can happen at any time.

Our first evening stroll outside the hotel was when I truly began to understand terrorism. As we walked barely 100 meters from our hotel in the pleasant evening, two men ran frantically in our direction screaming that shots were being fired and flailing as they tried to escape. Then I heard it. Not in a video. Not considered as an abstract concept. Kalashnikovs being shot just a few meters from me, splitting the peaceful air with an almighty crack, immediately followed by the fastest 100 meters I had run in my life. We were locked inside our hotel with all their 250 guards armed and combat-ready. A couple of hours later we found out that what we had heard was an ISIS attack. 3 policemen lost their lives just 300 meters from us.

Events like these are important to understand not only because you are truly terrorized, but because you start being able to make sense of why the people are a certain way, why they think the way they do and how the situation actually affects the lives and minds of the people living in a conflict region. I have been involved in Nepal Earthquake relief work as well and the two situations, while both life-threatening, are not the same in how they influence ones’ day to day decision making and, in consequence, larger socio-economic decisions and their relationships with each other.  To imagine the chaos presently unfolding in Afghanistan is impossible because you can’t understand it fully without experiencing it directly.

This was also the moment when I understood that my awkwardness and fear during the flightseeing the Afghan people was my own prejudice. Those people were in fact the victims of violence and I was thinking of them in the same light as those causing the violence. The passengers on that flight were no different to those feeling today, likely travelling for medical treatment, education, career or to escape persecution, all of which are fundamental human rights that the people in Afghanistan have long been denied. It is critical to recognize that the people of Afghanistan trying to get out of the country today are seeking the same dignified life as the rest of us around the world. It is important to understand while we assist the Afghan population that they are capable, aspirational, and don’t need charity but access to dignified livelihoods and a peaceful world for them to be able enjoy their rights and opportunities.

The series explores the experiences, understandings and stories from Afghanistan from the view of an individual working in Afghanistan and with Afghan partners for the past 4 years.