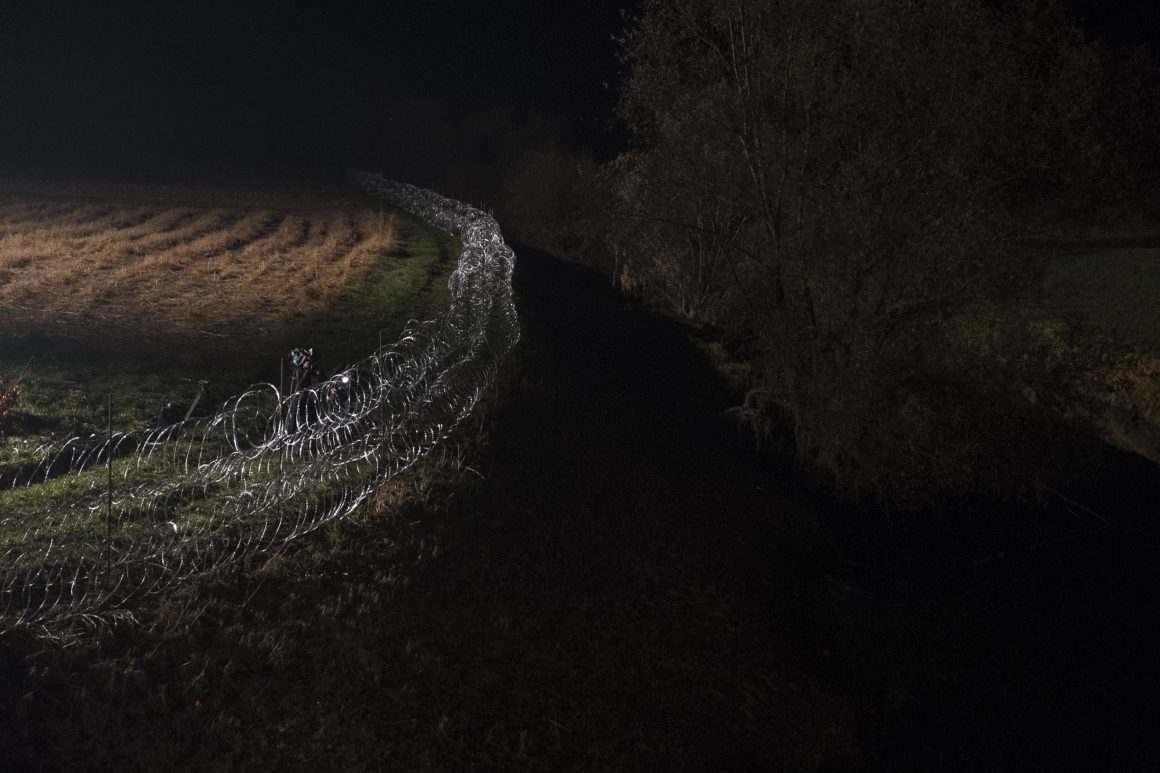 At the entrance to European Union (EU) territory, asylum seekers are bound for different countries. Most of them want to continue their journey to Germany and Sweden, although they are technically allowed to ask for asylum in the first EU country they enter. So far, less than 50 persons have asked for asylum in Slovenia. The Slovenian government erected a barbed wire fence in order to prevent the crossing of green borders. However, the fence might be erected on the wrong soil.

Among EU territories, recent migration flows have raised the question of territory occupation and the free movement of peoples. In this respect, sometimes drastic responses have been given, such as the Hungarian prime minister Viktor Orban’s decision to close the borders. He put a wall all along the Hungarian border and forced asylum seekers to change their path. In some other cases, the responses are more moderate, such as Slovenia which decided to erect a fence spanning less than 10 km of its borders. However, the Slovenian case raised another question: is a no man’s land really unoccupied?

On 10 November, the Slovenian government, led by centre-right prime minister Miro Cerar (SMC-party), decided to erect “technical barriers”—1.8 meter-high razor fences—on certain parts of the border between Slovenia and Croatia. More precisely, they were constructed at two locations. One is found at the key entrance for asylum seekers located between the Slovenian locality of Rigonce and the Croatian town of Harmica. In that region close to Brežice, border crossing points are on each side of the Sulta River, in the Dobova region in the far South-East of Slovenia. The other location where the barbed wire fence has been raised is the North-East region of Gibina.

The official reason for building fences is to redirect asylum seekers to specific transit zones where they are registered. Slovenia has recently renovated the Livarna camp nearby the train station in Dobova, which has become a bottleneck transit zone that migrants are forced to traverse, in order to facilitate the movement of peoples. After an obligatory registration process, migrants are directed onto buses or trains to start their journey. Authorities such as the European Commission have approved the use of those “technical barriers” in order to prevent uncontrolled border crossing, but fences along the border of that area have challenged territorial integrity and have raised some serious legal questions. Additionally, erecting a fence is a decision that needs to be made at the member state level, recalled Slovenian EU Commissioner of Transport Violeta Bulc during a visit to the Livarna camp. From 16 October to mid-November, about 220,000 asylum seekers entered Slovenian territory with only 49 asylum requests registered by the 15 November.

Fences on an ambiguous border

After Hungary and Slovenia, Austria said it will build barriers along its borders. While the Treaty of Trianon defined the borders of Hungary and Austria in 1920, Slovenian borders with Croatia are still under a controverted international arbitration.

The issue between Croatia and Slovenia started after the disintegration of Yugoslavia in 1991 and revolved around maritime boundaries in the Piran Gulf in Istria. In order to solve the territorial situation, the two governments signed an agreement on 4 November 2009 to submit their territorial and maritime disputes to arbitration before the Permanent Court of Arbitration in The Hague. The European Commission backed the need of a solution in light of the two countries’ accession to the European Union. Today, five members compose the tribunal.

Secret phone conversations between Slovenian arbitrator Jernej Sekolec and Slovenian agent Simona Drenik shook the Arbitration Tribunal last summer. Both resigned after the scandal but Croatia feared the arbitration process would be compromised. The country expressed its intention to quit the procedure backed by a unanimous vote in the Sabor (Croatian Parliament) in July 2015. In response, Croatian arbiter Budislav Vukas resigned. On 25 September, the Permanent Court of Arbitration appointed Rolf Einar Fife of Norway to represent Slovenia and Nicolas Michel of Switzerland to represent Croatia regarding the border arbitration proceedings in hopes to continue.

As previously mentioned, it is under the jurisdiction of member states to identify the measures to be implemented in order to assure EU borders are secure. However, member states are not obliged to notify the European Commission regarding the tools they use for border surveillance. Thus, the exact location of the Slovenian barbed wire fence has turned a local issue into an international matter.

At first, it appeared political. According to Croatian interior minister Ranko Ostojić (centre-left SDP Party), “fences mean that Croatia is not following agreements of leaders on the route.” In addition, he said in a message that “there is no reason for this act, there is no uncontrolled moving of migrants.”

In the region of Rigonce, green borders and official border lines do not align. Some locals claim that the river banks, originally used to determine the countries’ boundaries, changed over the last 20 years.

On 11 November, Slovenian military forces erected one part of the “technical barrier” along the Sulta River. Afterwards, Slovenian police stood on a bridge between the two riverbanks in order to keep the wire safe and prevent Croatian police from removing it, since Croatia claims that the wire had been set up on their territory. In response, Croatian police agents came to the other side of the bridge and stood in front of their Slovenian counterparts. As the situation intensified, the chief of police in Croatia brought a diplomatic note to his Slovenian counterpart notifying him to remove the fences; Croatia did not want to remove the wire by force in order to prevent any escalation. As the issue could not be solved between the two police forces, it worsened. The next day, Slovenian and Croatian presidents, Borut Pahor and Kolinda Grabar Kitarović respectively, met each other in Zagreb and admitted that the escalation of tensions was due to the fence dispute, but recalled the importance of good relations between the two countries.

At the same time during a press conference in Brežice police station, State Secretary at the Interior Ministry of Slovenia, Boštjan Šefic, explained that the work would continue with temporary barriers extending over 4.5 kilometres to be set up at the border with Croatia. So far, the barbed wire fences are still in place.

For every landowner, cadastre is supposed to define the exact boundaries of a property. When a property is close to no man’s land, such as a border between two countries, the exact point where a location ends may be unclear.

Ironically, Rigonce and Harmica are out of the arbitration process. Slovenia’s insistence to keep the barbed wire fences at their current locations could mean its willingness to bring Croatia back to the negotiating table on its borders.

The European Union insists on continuing the negotiations. The Permanent Court of Arbitration took into account Croatia’s reluctance to continue with the talks, but it is expected to issue its verdict by mid-December 2015.

I’ve been an immigrant for most of my adult life, and I cannot but express my full solidarity with my fellow immigrants, who have been less charmed.