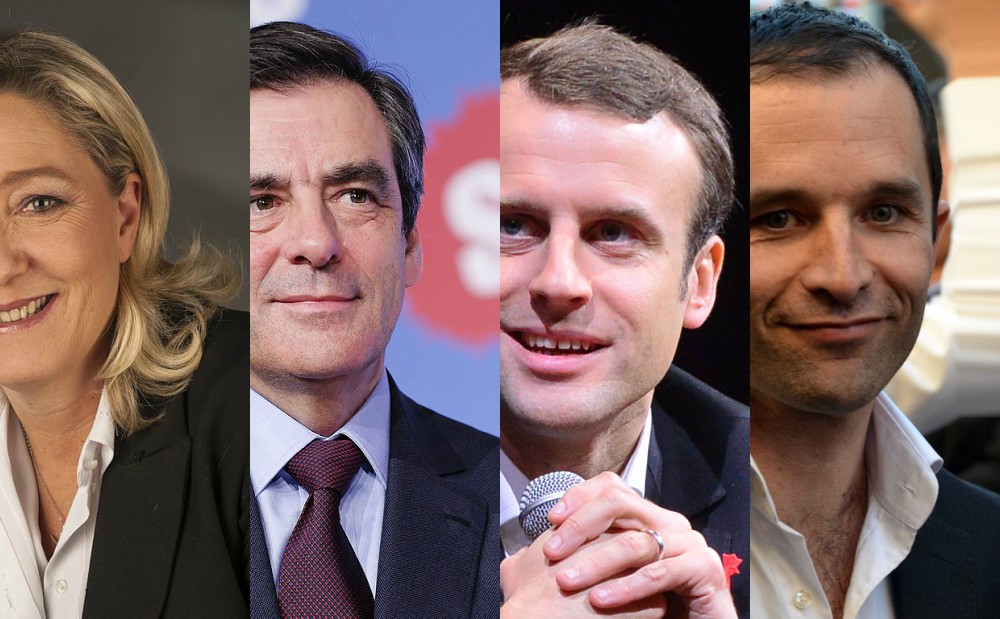 The result of this year’s election will determine France’s place in the world and affect the future of Europe for years to come. More than a vote, it has become a battle for the country’s soul.

France will go to the polls this spring, ending long speculation over who will succeed the unpopular President François Hollande. A vote on EU membership, the creation of a European army, better relations with Russia, an unconditional basic income, a higher minimum wage, a future without nuclear energy – this is what is at stake. But who will win the clash? Europe – and the world – has its attention fixed on this decisive election: its outcome may transform the fate of Europe.

1. Who are the candidates in the race to the Élysée and what are they pledging?

Surprisingly smashing both Nicolas Sarkozy and subsequently Allain Juppé in the primaries, François Fillon gained the sound support of 68.6% of the Republican electorate, in the second round, hence becoming the Republican candidate in the contest. Fillon, a conservative on both economic and social issues, proposed the creation of a European defence alliance aligned with NATO when presenting his vision of a Europe less reliant on the United States and in reconciliation with Russia. As for immigration, Fillon pledged a “strict administrative control of the Muslim faith” vowing to fight the “fanatics relentlessly and with no mercy”.

Emerging from the wreckage of the mainstream left comes the candidate Emmanuel Macron, who quit President François Hollande’s government after launching his own political party last April. Its name En Marche! (‘On the march!’, or ‘Forward!’) even shares the initials with his name. A self-proclaimed pro-European aiming to appeal to a large part of the electorate, ranging from the left to the right, Macron rails against what he considers France’s real establishment: a society supported by precarious employees which excludes young people from the labour market. A former investment banker, Macron also pledges to relaunch an investment policy that would see France again competing among “the big players” on the international scene.

In the meantime, Marine Le Pen, who is running for the anti-immigration Front National (FN) has been spreading her anti-European rhetoric and patriotic values throughout her campaign. Holding strong to her pledge to quit the European Union, Le Pen has made a public appearance in Koblenz, Germany, alongside the Alternative for Germany’s leader Frauke Petry and several other far-right European leaders in a public relations effort to pledge alliance ahead of the forthcoming French elections.

The most Eurosceptic of the French presidential candidates and a MEP, Le Pen has vowed to “put an end to Brussels superpower” while she praises Donald Trump’s “common view” on “economic axes” and his apparently unconstitutional stance on migration. In addition, the far-right contender promised to nurture solid relations with Russia.

A Nordic Green Left MEP and hard-line leftist, Jean-Luc Mélenchon, who joined the Socialist Party in 1976, launched his contention in February 2016 with the creation of the political movement France Insoumise (“Unsubmissive France”). His political movement heralds an ideology based on sustainable environmental policies including shutting down French nuclear plants and withdrawing from trade agreements like TTIP and CETA – which Mélenchon claims to “require us to pursue policies of austerity, without state action or public investment”.

The 65-years old defends the need to have the means to invest and change the way we produce and consume. “The energy transition is vital,” Mélenchon insists. Compared to Fidel Castro by François Fillon, the veteran leftist is also staking his cause upon a reduction of the retirement age to 60 years and a vow to increase the minimum wage to €1,300 per month.

After the incumbent President François Hollande decided not to run for a second term in the Élysée, Benoît Hamon emerged as the Socialist candidate, beating former Prime Minister Manuel Valls in a runoff ballot with 58% of the vote. His campaign was centred on the basic income, the legalisation of marijuana and taxing robots, both projected to boost the revenues of the public coffers. Moreover, Hamon has pledged to push France into an energy transition from fossil fuels to 50% renewables by 2025.

The 49-year-old former education minister Hamon was the most left-wing of all the Socialist candidates. Indeed, the Socialist is a public admirer of Jeremy Corbyn’s and Bernie Sanders’ vision of the world.

The French Socialist party has been in decay since Hollande’s election and its fresh new candidate is likely to rank only 5th on election day, according to polls. Given the political weight distributed on the left with both Macron and Mélenchon, some had even questioned whether the Socialist Party would present a candidate at all. “It is a probability,” said the MEP, anticipating a possible fragmentation of the left vote, which could empower the FN’s Marine Le Pen. Still, it seems unlikely that Benoît Hamon will abandon the electoral race.

2. What seems likely to happen?

According to The Independent, FN leader Le Pen is the frontrunner for the first round in the latest election poll, with 25-26% of the votes, while Fillon is expected to beat the far-right figurehead with 64% in the May runoff election, to become Hollande’s successor.

Often characterised as a French Margaret Thatcher, Fillon is an economic liberal, whereas Le Pen is a protectionist. Fillon wants to remove 500,000 jobs from the French civil service, while Le Pen favours a strong state. Yet, the recent scandal involving Fillon’s wife and the misuse of public funds has put the Frenchman at the centre of a scandal that could seriously jeopardise his candidacy. Indeed, the latest poll from Les Echos has suggested that Fillon will fail to make to the second round of the election on 7 May. Given this hypothesis, the survey puts Macron as Le Pen’s main contender.

Yet, Le Pen has also been on the spotlight after having refused to pay back €339,000 of misused EU funds, the deadline for which was 31 January. An investigation by OLAF, Europe’s anti-fraud watchdog, concluded that the FN leader leveraged her presidential campaign with public money, falsely employing parliamentary assistants in Brussels. 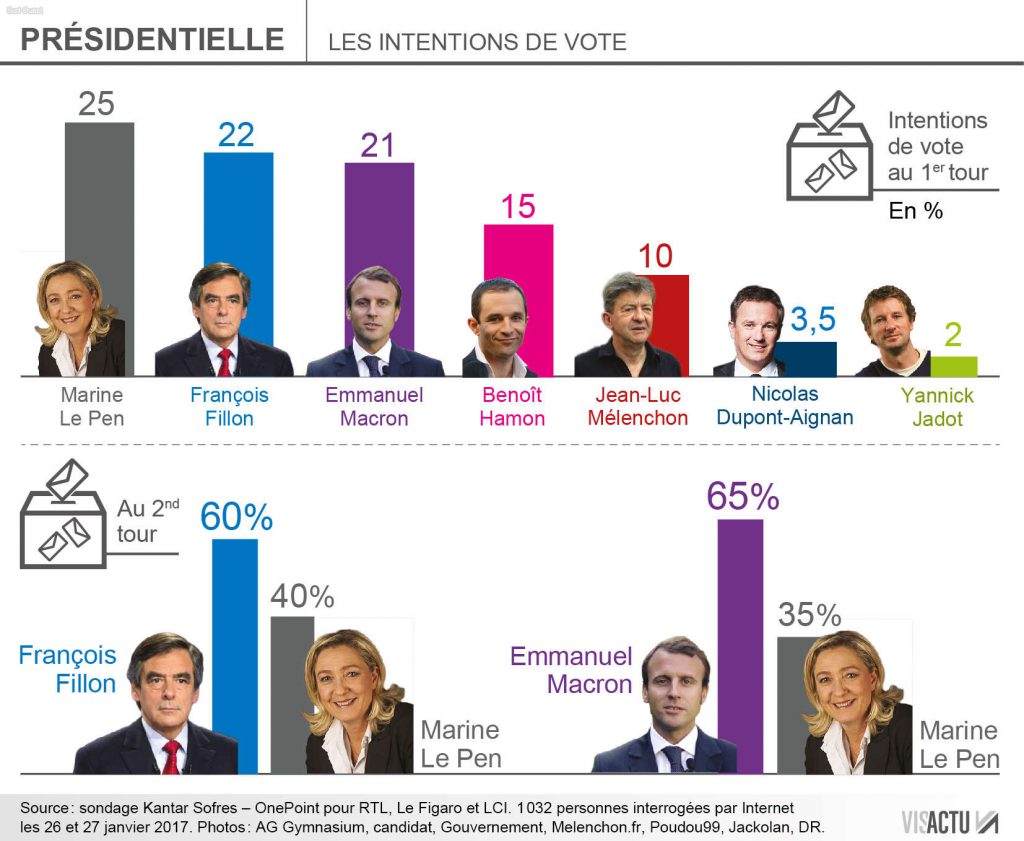 Meanwhile, Emmanuel Macron is polling well and beginning to close on Le Pen and Fillon, bringing a dose of extra uncertainty to the electoral result. Naturally, a race to the Élysée doesn’t come without a shower of critics. Le Pen criticised the independent candidate, when he delivered a speech in English during an official visit in Berlin. Moreover, Fillon has accused Macron of being a replica of Hollande, saying that the former economy Minister helped the outgoing president building up his political programme.

As for Mélenchon, the leftist is expected to win only 10% of the vote, according to latest polls.

The blame game is traditional in politics, particularly in times of elections, yet one thing seems certain: both Fillon and Le Pen – the highest polling contenders so far – have been using social media not only to launch their political campaign but also to denigrate their opponents. Macron, Mélenchon and Hamon, on the other hand, have stuck to a more candid campaign focused on what they are promising to achieve.

The race is on. The winner will lead the VI Republic and choose its future direction.

Commemorating Charles Darwin, his contributions to science, and the importance of reason, the scientific community celebrates Darwin Day on February 12. The English scientist is probably best known for his publication ‘On the Origin of Species’, which includes his original proposal of the ‘theory of evolution by natural selection’. His life’s story, from adversity and hatred to becoming one of the most famous names in science, can teach us a lot about the importance, but also perils, of publicly presenting scientific advancements.   Charles Darwin’s achievements…

As international issues go, climate change is unique in that it will, without exception, impact every single country on Earth. The responsibility for it is therefore shared widely among countries, and the crisis can only be effectively mitigated if there is global cooperation and a unified response. With the threats posed by climate change becoming…