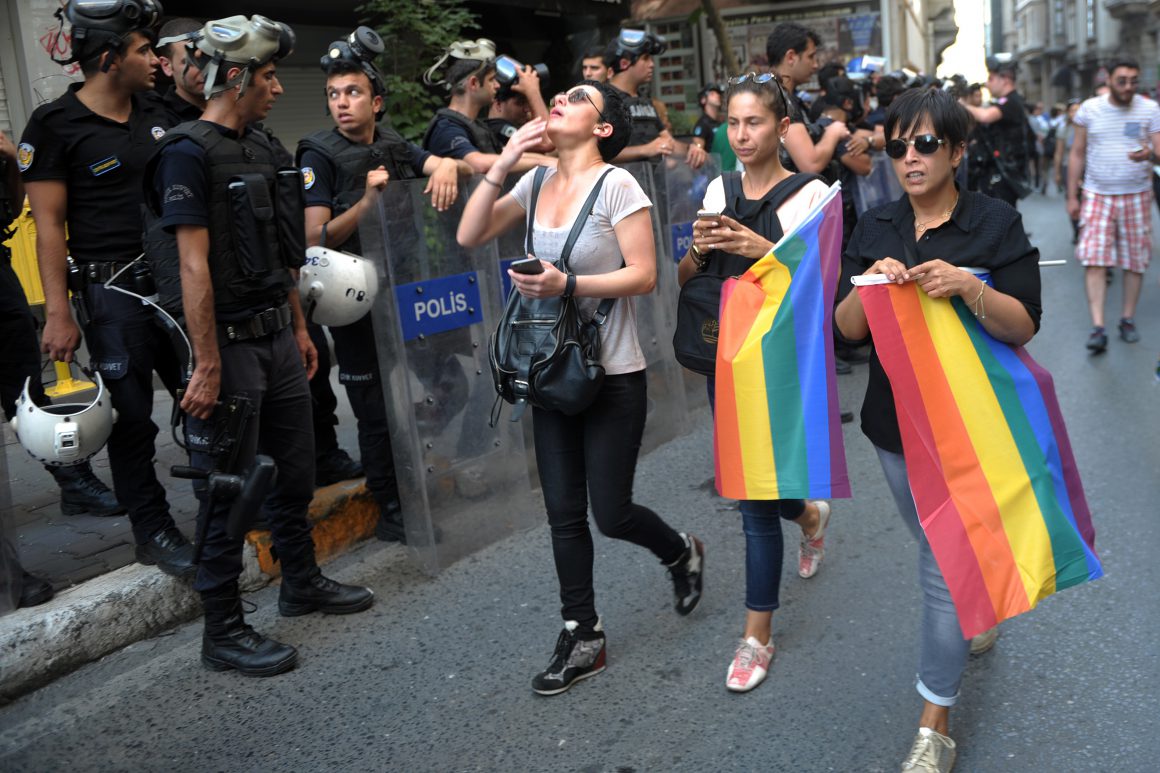 Istanbul Pride does not have a very long history, yet it has recently become increasingly significant. In the year 2003, with the participation of roughly 30 people, a pride march was held; a decade later the number grew to over one hundred thousand. This year, as well as last year, this joyous and colourful celebration of the Pride Week was subject to police repression and violence.

The gradual opening up of Turkish society to differences had gained pace in the past decade and the LGBTI community had benefited from this too. When the mass protest movement ‘Occupy Gezi’ coincided with the Pride Week in 2013, there came an ocean of support for the LGBTI movement from almost all parts of the society, as well as more attention from hate-groups and the police forces. This was partly due to the overwhelming presence of the LGBTI groups during the occupy movement and their contribution to the protests, rhetorically, spiritually and physically.

The organic growth of the Pride Parade in Istanbul has been one of the most comprehensive movements, slowly gaining more and more presence in daily life and contributing to tolerance in society as a whole. LGBTI groups had declared that in the coming years the community in Turkey would push for full recognition of equal rights, including marriage and adoption; which made the movement more of a political entity and appeared in political declarations of parties during elections. As a result of this recognition, negative reactions also started emerging from the authorities and other political movements, in san increasingly repressive fashion.

The police used water cannons shooting against Pride participants. Yet this ‘intervention’ caused a rainbow to appear in Taksim Square.

Pride 2015 was celebrated with all colours of the rainbow all around the world, yet in Istanbul the police used water cannons, tear-gas and rubber bullets against the participants. The decision by the Istanbul governor to ban Pride Parade and the police assault signalled the attitude that would prevail towards progressive rallies and demonstrations in the current year too.

Prior to the Pride Week 2016, a far right group “Alperenler” (the Combatants) announced that they would not allow the march to take place, that the group had calculated all risks and would stop the march at all costs, calling the LGBTI individuals “immoral and honourless”.

Upon this statement, several transsexual sex-workers voiced their reaction saying “You call us immoral but what about you, our clients? If we were to announce your names, you would not even dare to show your face in public”. Then came another, milder statement from the far right groups saying they did not mean any harm, and only meant showing their democratic reaction to a march they did not consider ‘natural’. Only 11 people answered this call and showed up to intimidate the march.

LGBTI organisations responded, “we had not asked for permission anyhow”. The Trans March took place on June 19th, and the police intervened as was expected. A week later, Pride Parade took place finalising the Pride Week events, with the motto “we are dispersing all around”, as reference to a police warning message the week before, which said “please disperse in order to return life to its normality”. Hence came the motto for Istanbul Pride 2016: “#WeAreDispersing”.

All streets leading up to Taksim Square and Istiklal Avenue were blocked and barricaded by the police to not allow the march to take place. The governor’s ban created an atmosphere of tension, and combined with the legislation allowing police to brutally intervene in any kind of peaceful protest, discouraged people from participating in one of the most colourful and peaceful demonstrations in the world.

At the end of the day, 19 people were detained, including the German Member of Parliament Volker Beck and the Member of the European Parliament Terry Reintke. During the police intervention, it is reported that an Italian reporter, Alberto Tetta, was approached by the police, was asked for his press card (issued by the Turkish state in order to cover news in the country), and was shouted at “if you report negatively on Turkey, I will shoot you”.

Only last year, the governing AKP’s electoral pamphlet stated that they were welcoming all kinds of people from all parts of the society. The party even included in the pamphlet the LGBTI events in Turkey as a positive development, and had advertised on LGBTI dating applications to get votes. Until last year, there were even a lot of people saying “we have lived the most comfortable time of our lives, all during the time of AKP” not acknowledging the progress achieved globally and due to the hard work of the activists but merely regarding government as responsible for all developments.

A lot has changed since the June 2015 elections in Turkey: Thousands have been killed in anti-terror operations and hundreds of civilian houses have been raided. The government has announced that the ‘democratization package’ is no longer on the agenda, putting all disadvantaged groups at risk, be it Kurdish, Alevi, Romany, etc. LGBTI rights also seem to have followed the same path, like all other progressive reforms that the party had been carrying out for the past decade. Yet, the movement has proven its resilience and its will to attain full equal rights.