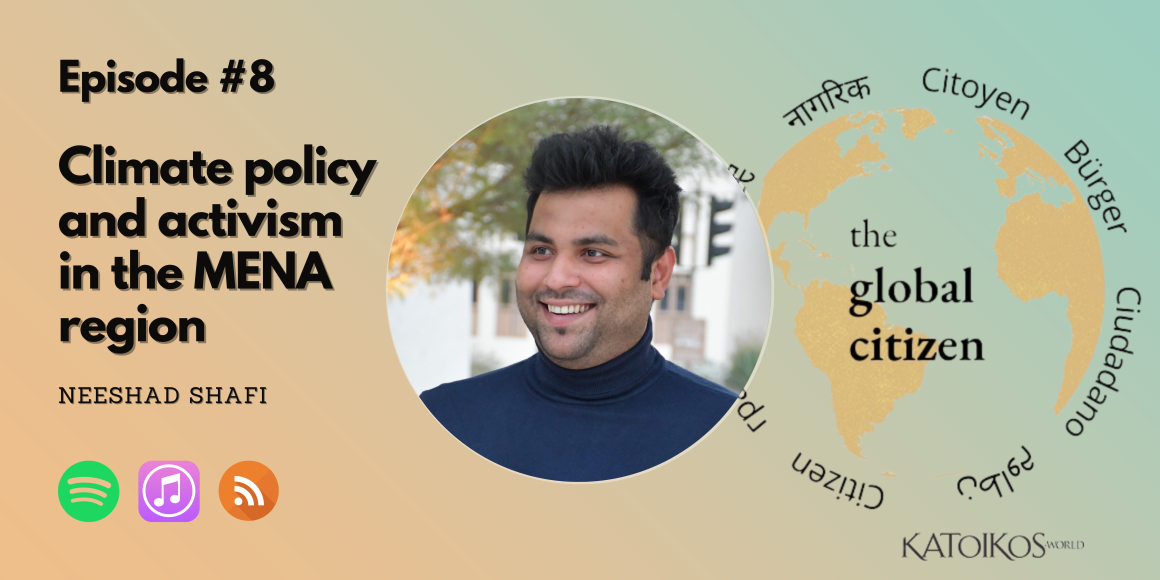 Climate change is a global crisis that knows no borders. As a consequence of that, climate activism is (thankfully) becoming a global storm that transcends borders, in order to collectively imagine and create a livable, sustainable future for our species, no matter which part of the world we’re from.

In this episode, we had the privilege of learning about climate activism specifically in the Middle East and North Africa region by one of the most important players in that space: Neeshad Shafi!

🗣️ Neeshad is an environmentalist, speaker, and social change advocate from Qatar. He has over 5 years of experience in analyzing Global Environmental Politics and Climate Policies with a special focus on the Middle East. He’s an active member of several global environmental youth groups and contributed actively to international summits, notably the Conference of the Parties of the UNFCCC, the UN Youth Climate Summit, and more. He is also the co-founder of the Arab Youth Climate Movement Qatar, which is the first, registered, Independent, youth-led, grassroots, non-profit association in the State of Qatar.

🌳 In our conversation today, we went over the youth climate movement in the MENA region, namely how it functions, what its prospects are, and what its future (and the future of global youth climate activism) might look like. Additionally, we explored topics around climate policy in the MENA region in general, touching on various subjects, from oil geopolitics to climate justice. Tune in for more!

Unfortunately, the more layered and complex a governance system is, the harder it gets to make sure that policy is being implemented correctly and addresses the issues it set out to fulfill. This leads to laws not achieving their purpose, and problematic situations remaining as they are, even after being “mended” by legal means. Often,…