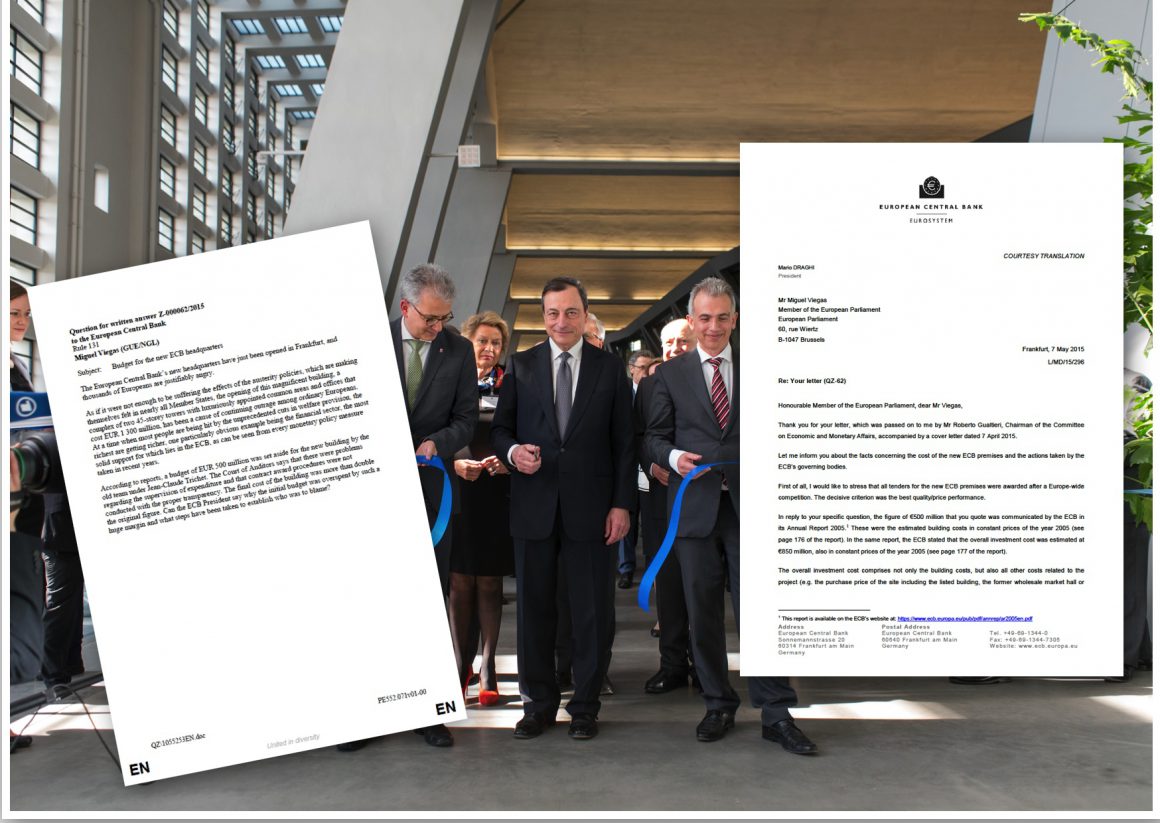 Question on the cost of the new headquarters of the European Central Bank (ECB) submitted by Portuguese MEP Miguel Viegas (GUE/NGL) and response by ECB President Mario Draghi.

On 18 March 2015 the European Central Bank inaugurated its new, glittering headquarters building in Frankfurt, at a cost of €1.3 billion. Taking issue with this significant expense at a time of austerity policies around Europe, and the fact that the original budget for the building had been set at €500 million, a Member of the European Parliament, Miguel Viegas of the European United Left / Nordic Green Left (GUE/NGL), submitted the following question to the ECB President: “…The final cost of the building was more than double the original figure. Can the ECB President say why the initial budget was overspent by such a huge margin and what steps have been taken to establish who was to blame?”

In his written response dated 7 May 2015 the ECB President specifies several important deviations from the original €850 million “investment cost” foreseen in 2005, to the final €1.3 billion. Using the expression “not foreseen challenges”, Mr. Draghi basically acknowledges serious budgeting errors –that is, not anticipating the actual costs involved– at the time of presenting the original budget. Finally, Mr. Draghi explains that €220 million of the final bill correspond to inflation and indexation adjustments since 2005. It is to be assumed that all this was or should have been calculated at the time of making the necessary budget forecasting, and communicated to the public. This raises the question as to whether this is the model that the ECB is putting forward as example of financial planning for public administrations, and whether the Bank is managing in the same way the Eurozone’s monetary affairs.

This raises the question as to whether this is the model that the ECB is putting forward as example of financial planning for public administrations, and whether the Bank is managing in the same way the Eurozone’s monetary affairs.

An important statistic: Mr. Draghi informs in his reply that the overall workplace capacity of the high-rise building was raised from 2,300 to 2,900 staff. Dividing €1.3 billion by 2,900 staff, it yields an average cost per workplace of €448.275! Enough to build a detached house with a swimming pool for each staff member. Surely there are some explanations that one can use, in terms of security, prestige, hi-tech equipment and other requirements for the ECB building. Those, however, should have been clearly spelled out and justified and, for the sake of transparency and a minimum semblance of citizens’ ownership of an institution that belongs to them, should have been the object of some public discussion.

Let´s not forget that Greece, Spain, Portugal and other Eurozone countries under serious public expenditure adjustments are participating proportionally in the expense. What would the institutions formerly known as Troika have said if any of these countries had inaugurated premises of such standards recently? Well, in fact this is exactly what has happened. Greece, Portugal, Spain and the others, in the middle of structural adjustments of a severity not seen in decades, have just inaugurated the most expensive-per-worker office building ever built for a national or European public sector entity.

What would the institutions formerly known as Troika have said if any of these countries had inaugurated premises of such standards recently? Well, in fact this is exactly what has happened

One can understand the symbolism associated with the most important financial institution of the EU, which manages the second most important fully-convertible currency in the world. It should convey an image of authority and modernity and should be headquartered in a top-notch facility, not lagging behind any of the corresponding public institutions around the world and any of the commercial banks that it supervises. To many European citizens, though,  the magnificent building and the gross overspending associated with it rather convey an image of wasteful luxury, mismanagement, privilege and unfair distribution of the burden of the economic crisis. At a time in which mistrust between the financial sector and the rest of the society runs high, the ECB seems to have got its symbolism utterly wrong. 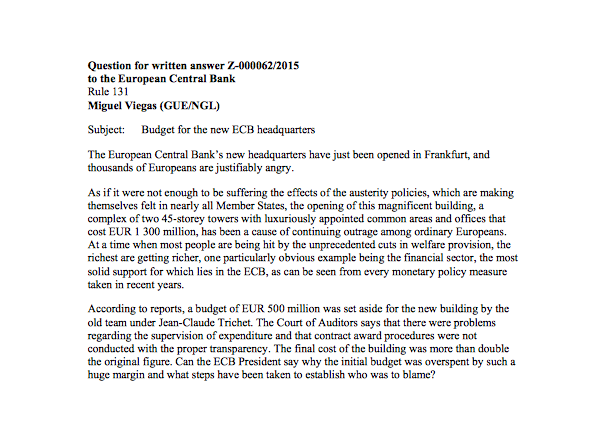 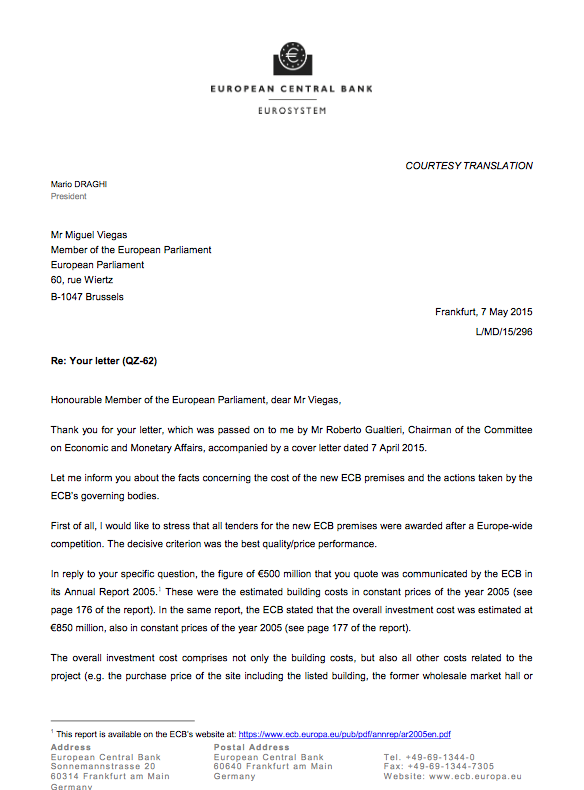 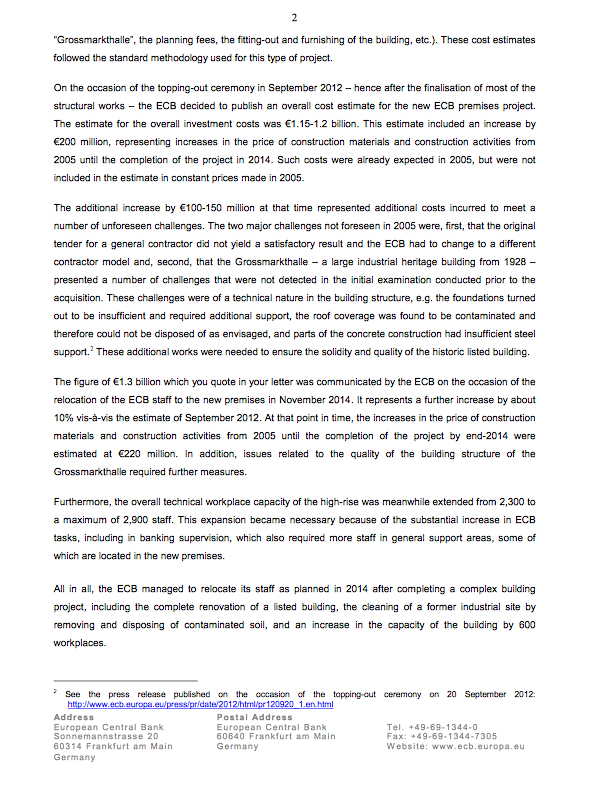 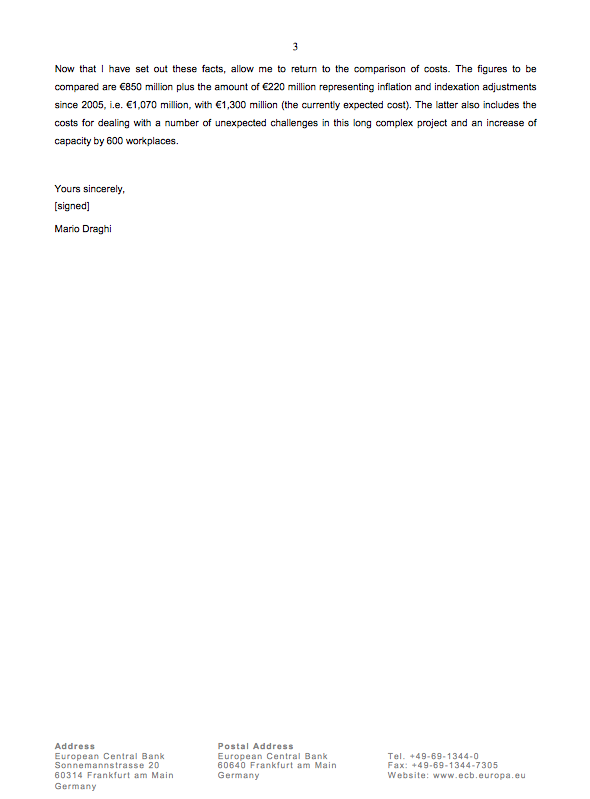 European Parliament press release date 7 October and entitled: François Hollande and Angela Merkel  face the MEPs. The current situation in the European Union and challenges to be tackled together, and notably migration, were at the heart of Wednesday afternoon’s debate between European Parliament political group leaders, President of the French Republic François Hollande and Chancellor…