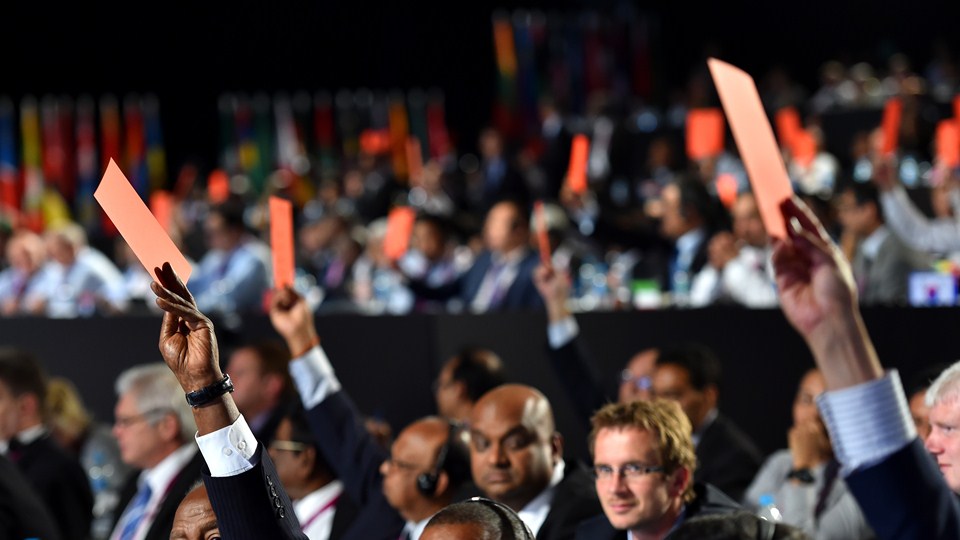 The future of the World Cup is in the air and FIFA is mired in one of its deepest crises. US justice authorities have accused nine of its executives of corruption and Switzerland is currently investigating the award of the 2018 World Cup to Russia and the 2022 event to Qatar.

In what could be the biggest sports scandal in history, early on Wednesday Swiss police burst into the luxury Baur au Lac Hotel in Zurich and arrested seven FIFA officials – and in the same city carried out a search at the headquarters of football’s powerful governing body. There are also five business executives involved in the plot.

All are accused of fraud, conspiracy and money laundering. US attorney general, Loretta Lynch, explained that this is a corrupt network with “deep roots” that has operated consistently for decades”. “They were expected to defend the rules that kept football honest, and protect the integrity of the game. Instead, they corrupted the football business worldwide to serve their own interests and get rich.”

US attorney general, Loretta Lynch, explained that this is a corrupt network with “deep roots” that has operated consistently for decades.”

The research calls into question the leadership of the world’s most widely viewed sporting event, with over $1bn in annual revenue and with sponsors as powerful as Coca-Cola and Adidas. The current scandal does not affect the FIFA president, Sepp Blatter, who is hoping to renew his mandate for the fifth time in the elections this Friday, at which Jordanian Prince Ali Bin Al Hussein is also standing.

Blatter’s management is now under suspicion and his re-election seems less likely. FIFA spokesman, Walter De Gregorio, said in a press conference that the vote will take place exactly as planned and that “the President is not involved, and if he comes out reflected he’ll hold the post for the next four years. He’s not dancing around his office – he’s quite calm; he sees what’s happening and is cooperating fully. He’s not happy but he knows that this is the consequence of what we started.”

The list of accused includes US and South American executives who allegedly paid more than $150 million in bribes and kickbacks for commercial agreements and television rights relating to the award of the World Cup venues.

“It’s tough for us, but you won’t believe me – this is good for FIFA; it confirms that we’re on the right track. It hurts, it’s not easy – but it’s the right way to go. It’s not good in terms of image and reputation but it is in terms of integrity,” said FIFA spokesperson Walter De Gregorio.

Lynch explained that “the people detained used their positions of trust to ask for bribes in exchange for commercial rights. They did it again and again, year after year, tournament after tournament. “Among those accused are Jeffrey Webb and Jack Warner, current and former president of the CONCACAF, the confederation representing FIFA in North and Central America and the Caribbean.

FIFA has acknowledged the difficult time the organisation is currently going through. “It’s tough for us, but you won’t believe me – this is good for FIFA; it confirms that we’re on the right track. It hurts, it’s not easy – but it’s the right way to go. It’s not good in terms of image and reputation but it is in terms of integrity”, said De Gregorio.

FIFA generates more than 90% of its income through the World Cup. The tournament brought in takings of $4.15bn in the four years leading up to the 2014 edition in Brazil. This investigation could now lead to the definitive expulsion of the World Cup senior management team, which has been affected by numerous scandals under President Blatter, who took office in 1998.