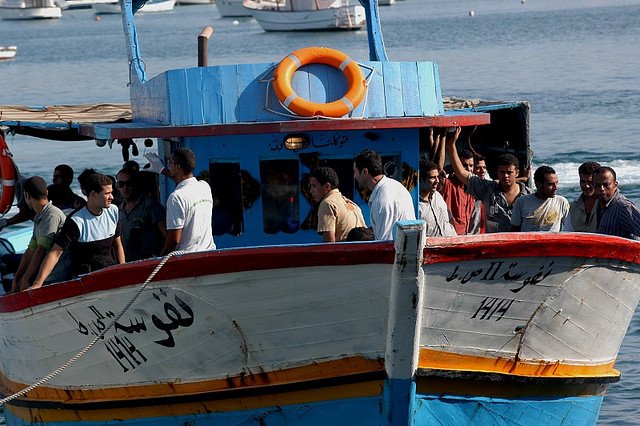 No more excuses: either our continent really unites or it is destined to fall apart under external and internal strains. The ongoing refugee crisis is one more demonstration of the need for a Europe with one voice, one plan and pooled resources.

Huge damage has already been done by interventions in countries like Iraq, Syria and Libya, with the acquiescence if not active participation of some European countries: interventions of dubious legality lacking a plan for the day after. But if you throw garbage into your neighbour’s backyard, your neighbour and/or the garbage will eventually catch up with you. And this is what is happening in the form of a huge human tsunami that is hitting Europe from its southern coasts all the way to the north.

Everybody is overwhelmed. Those who initially receive the tens, hundreds of thousands of refugees of all ages – people who obviously had a decent life at some point, were not destitute, have education and certainly have seen better days – and those who are in the countries that refugees see as their final destination, where they want to get asylum

Dublin regulations that would require these people to stay put in the original countries of entry, like Greece and Italy, no longer apply in practice, as the human wave is pushing ahead and the receiving countries are unable to host them even temporarily, already saturated by previous entries and facing their own immediate problems, like Greece. The countries of final destination are showing signs of great fatigue and dissent, as their hospitality and generosity are strained to their limits and the very fabric of their societies is being pulled apart at the seams, as they contemplate the integration of such large numbers of people who are carriers of different cultures and religions.

But then you have those purely human stories that hit at the core of our common existence, no matter the civilization, religion, gender, wealth or what have you: 71 refugees found dead at the back of a truck traveling from Hungary into Austria, hundreds of people dead because of sinking boats in the Mediterranean, misery and pain and fear and death all over…

The European Agenda on Migration –the European Commission’s proposed response to all this established just a few short months ago–is seriously outdated, not having foreseen such huge numbers and approaching the issue, as usual for Europe, in an incremental way, negotiation after negotiation, trying to please everybody, with everybody having a veto, missing the bigger picture, unable to plan ahead for the continent as a whole…

The countries of final destination are showing signs of great fatigue and dissent, as their hospitality and generosity are strained to their limits and the very fabric of their societies is being pulled apart at the seams, as they contemplate the integration of such large numbers of people who are carriers of different cultures and religions.

At the same time, we witnessed the attack on the Thalys train from Amsterdam to Paris, one of several incidents in recent months of terrorist attempts to strike at the heart of Europe. The response? Ministers from nine EU countries gather in Paris to discuss closer cooperation. Does that sound like enough? Does that sound like Europe is contemplating and taking decisive action? It rather sounds like miserable intergovernmental cooperation, thinking small while the cause of the problem is thinking big (nobody could accuse the Islamists of having small ambition), playing the roles of ministers here and there and participating in meetings as if nothing has really happened, only business as usual. That is probably how Louis XVI and Marie-Antoinette felt and behaved just before the storm of the French Revolution hit them…

Wake up, “leaders of Europe”, and do something worth this title that you want to use for yourselves. Leadership means being brave enough to cut one’s prerogatives, to take off the blinders and see the bigger picture, to join hands not only conditionally and on strict intergovernmental terms but as a real family of peoples who share a common destiny. For the refugees, see how they can be distributed, how they can be turned into an asset, trained into the ways of Europe and integrated into this ageing continent, till they are able to go back to their countries of origin, if they are ever able to do so. For terrorism, establish a pan-European intelligence service, like a European FBI, not through diplomatic contacts of existing national services but by really integrating them under a single command, headed by the most competent individuals and not through a directorate of 28 representatives of the 28 EU member states, some of which are more equal than others. Of course, we can and should take this approach higher up, all the way to the top of Europe’s governance, which has to become a government, if it is not to simply preside over the end of this experiment.

Wake up, “leaders of Europe”, and do something worth this title that you want to use for yourselves.

For years we have been taking Europe as a given, and an ever-improving one for that. It is time to realise that things are being reversed and there is nothing automatic about moving on to better days – it is all a matter of vision, political and popular will, and lots of working together.