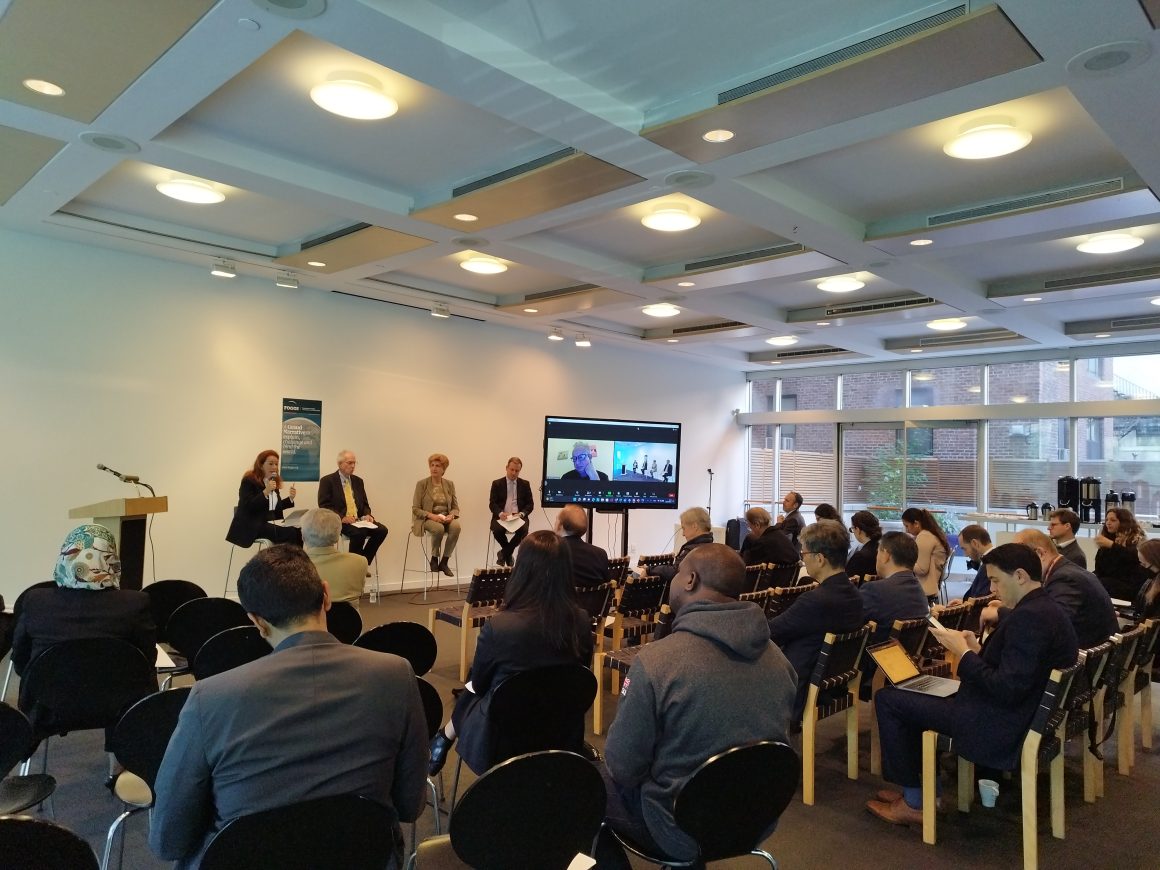 An event under the title “Global Governance: Breaking down or breaking new ground?” was convened by the Foundation for Global Governance and Sustainability (FOGGS) and the Global Crisis Information Network (GCINET), with support from the Global Challenges Foundation, in New York City on 23 September 2022, on the sidelines of the high-level week of the United Nations General Assembly. The event’s purpose was to consider whether global governance, as currently structured and practiced, is capable of effectively dealing with multiple and cascading environmental, economic, social, and security crises, and if not, what can be done to address inefficiencies and gaps. Participants included representatives of governments, CSOs, academia, think tanks, and former and current UN officials. To facilitate an open exchange of views without public attribution, the Chatham House Rule was observed.

The first part of the event considered ideas to strengthen the global governance architecture to effectively address existential threats to human security. Presentations were made on the UN Secretary-General’s report “Our Common Agenda” (OCA) and its aftermath, the case for a Global Resilience Council (GRC), a UN Charter amendment and/or creative reinterpretation, and what is effective multilateralism. The second part discussed the war in Ukraine and what is being done about it. Presentations were heard on the implications of the war from a big-picture perspective, the role of the UN in the war thus far, a possible framework for negotiations, and the humanitarian and peace-building role of local and international civil society.

Participants overall agreed the current multilateral governance architecture is incapable of managing concurrent and multidimensional global crises, such as the COVID-19 pandemic, climate change, biodiversity loss, and the food and energy insecurity exacerbated by the Russia-Ukraine war. Discussants proposed a number of solutions, ranging from amending the UN Charter using Article 109 to convene a Charter review conference, to making more practical adjustments to existing UN multilateral bodies and their modus operandi. Regardless of preference in terms of reform modalities, all agreed that a more agile, inclusive, equitable, people-centered, and “grounded-in-reality” global multilateral system is required.

With respect to the war in Ukraine, there was broad agreement that the UN Secretary-General (UNSG) had an important role to play in bringing it to an end. There were divergent views, however, on how exactly the UNSG should perform this role: whether he should remain impartial in order to broker a peace deal, or whether he should maintain a vocal stance against Russia given its breach of the UN Charter and international law.

While all agreed that aggression is unjustifiable, there were different views on the appropriate response to the Russian invasion of Ukraine. Some were of the view that condemning and isolating Russia was the only morally acceptable response, while others favored a more practical approach that would facilitate a “rapprochement” between the parties to end violence and destruction as soon as possible.

Throughout the event, many highlighted the role that women, youth, local communities, and other grass-root groups play in the attainment of the Sustainable Development Goals (SDGs) and indicated that they could also support humanitarian assistance and de-escalation of the Russia-Ukraine conflict through personal contact and communication on the ground and also at the negotiating table.

All concurred that the UN Summit for the Future, to be convened at the ministerial level in 2023 and at the Heads of State level in 2024, is a prime opportunity to re-think, re-tool and re-skill the UN for today’s challenges and tomorrow’s opportunities.  Reforming the UN to make it more effective and relevant is indispensable because of its unique legitimacy derived from the membership of 193 states.

The UN was formed to maintain international peace and security, to develop friendly relations among nations, and to promote social progress, better living standards, and human rights. Looking retrospectively, in many ways the UN has fulfilled its promise because life expectancy and living conditions for many have improved since 1945, human rights are increasingly reflected in countries’ legal frameworks, and a nuclear war has been averted – until now.

The threat of the escalation of the war in Ukraine is real, as the rapidly evolving situation is clearly demonstrating; and so are the consequences of climate change and increased biodiversity loss. The world is at grave risk, which is why we are at the threshold of another foundational moment for the UN and global governance – either we seize the opportunity to revive it now, or face potentially irreversible consequences for humanity and the planet in the years ahead.

A more detailed summary of the discussions held at the event can be found — along with the programme, information on the distinguished moderators and speakers, and background material on the topics covered — in the report prepared by the event’s rapporteur, Paola Bettelli, and issued by FOGGS in October 2022. The report is available here.