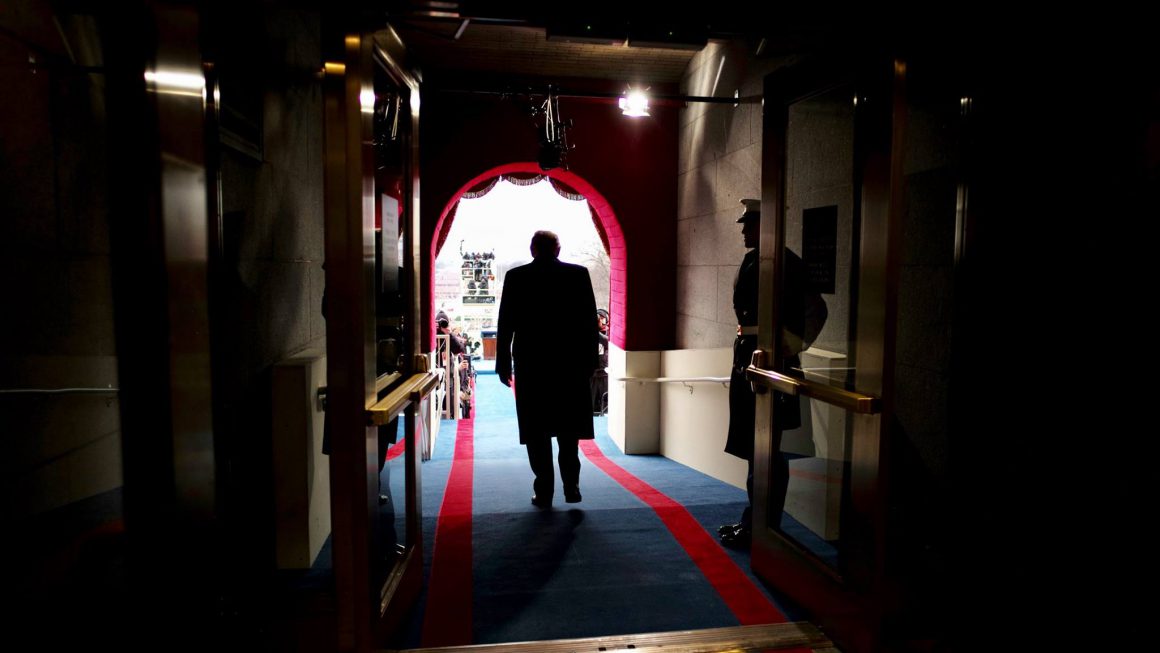 Donald Trump preparing to be sworn in as President (Wikimedia Commons)

On Friday, 20 January 2017, Donald J. Trump was inaugurated as the 45th President of the United States of America. He used the occasion to remind his fellow US citizens and the rest of the world of his campaign promises, summing up with the nationalist slogans “America First” and “Make America Great Again”.

The new President did not lose time before starting to implement some of those promises, such as freezing support for “Obamacare”, which he wants repealed; removing climate change from the White House website; and inviting the leaders of Canada and Mexico to meet him and review the North American Free Trade Agreement (NAFTA). He also withdrew the US from the Trans-Pacific Partnership (TPP), a major trade agreement among the countries around the Pacific Ocean.

Mr. Trump had a telephone conversation with the Israeli Prime Minister Benjamin Netanyahu, inviting him to the White House in early February, amid rumours that the US would move its embassy in Israel from Tel Aviv to Jerusalem, an anathema for Palestinians and other Arabs. He announced that in a few days he would be visited in Washington, D.C., by Prime Minister Theresa May of the UK, whose decision to leave the EU he had applauded. His associates were speaking to the Russian Embassy in Washington in order to arrange a telephone call between him and President Putin.

The contrast with former President Obama could not be starker. While civility determined a polite send-off by the new first family of the Obamas from the White House, the unraveling of the latter’s legacy seems to be the focus of the new President.

He may have no clear idea of how to replace Obamacare with something that works better for the American people, especially the underprivileged. But the privileged and well-connected billionaire approaches and talks to working-class Americans in a way that the nerdier Hillary Clinton, his electoral opponent, could not. Mr. Trump’s rhetoric about bringing back companies and jobs to America, eliminating Islamic fundamentalism, and keeping foreign workers out of the US territory and job market continues unabated.

In addition to new priorities in terms of substance, President Trump and his team are introducing a new style in relations with the press and even with truth itself — the strategy of the new White House press secretary, Sean Spicer, seems to promote “alternative facts”.

A new, obnoxious style that does not seem to tolerate dissent and is ready to recast reality according to whim. Even the simple issue of whether Friday’s Presidential inauguration had an audience bigger than any other in the past became a major bone of contention, even though the press compared aerial photos from the Trump and Obama inaugurations, clearly showing that Obama’s was much better attended.

What seems beyond doubt is that this US President’s inauguration has attracted a very large number of protest marches around the world. This is not going to be a passing fixture of this Presidency. But will Mr. Trump be deterred by criticisms of his policy and styles; probably not.

President Trump is apparently determined to upset the status quo in the US and the world. The result may be positive, if he focuses on and manages to mitigate several of the failures of the current system. This includes the world financial system that has led to gross inequalities, like the fact that the eight richest people have in their hands as much wealth as half of humanity, as recently suggested by Oxfam.

One can only hope that Mr. Trump will be less of a populist provocateur and more of a proposer of new, workable solutions to the many problems that plague globalization.

Till then, it does feel like the end of the world as we know it or, at least, the end of liberal democracy is near, when one hears the Chinese President defend globalization and climate change in his Davos speech, against the professed new American isolationism and attacks on climate action.