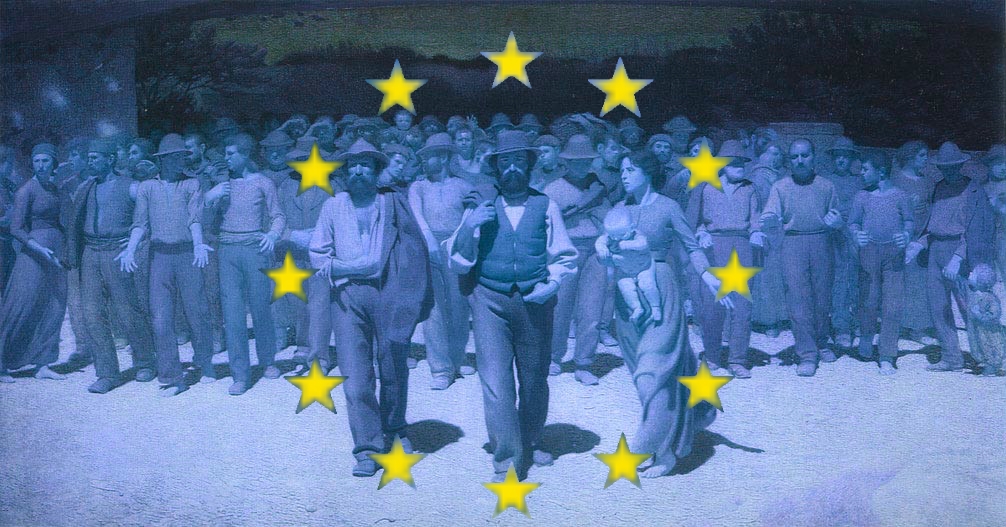 Pietro De Matteis holds a PhD in international studies form the University of Cambridge, which he obtained based on a researched conducted in the U.S. (Columbia University) and China (Renmin University). He worked for various European organisations and co-founded the European Federalist Party, a pan-European movement that has now joined forces with Stand Up for Europe, of which he is vice-President. The objective of the movement is to help creating a European political public sphere. In 2014 Pietro stood as an MEP candidate in Belgium.

Decisions at the EU level are often taken on the basis of national interests, which recent crises have proved to be inadequate and against the overall interest of European citizens.

Contemporary challenges are increasingly global, and it is increasingly obvious that many issues – ranging from climate change to tax evasion or terrorism, cannot be dealt with effectively by any single country alone. Nonetheless, defenders of national interest are more vocal than ever. Why is it so?

In the absence of a global political sphere, legitimacy to deal with any global challenge lies at the national level and the approaches defined to tackle them are framed on the basis of interests perceived as opposing each other: local vs. national vs. global.

In Europe, thanks to the European Union, political participation does not happen only at the local, regional and national levels but also at the macro-regional, European level. This additional level allows citizens of small and medium-sized countries to have an impact on issues that they would normally not be able to influence. This is usually the case when the European Commission has the competence to act, but not necessarily when the power remains in the hands of the member states in the European Council.

The vacuum of governance and government

The Council works in an intergovernmental manner and its decisions are informed by the interests that each national government represents. In such a framework, even when the “general European interest” and the various “national interests” are aligned in the long run (e.g. solving migration or boosting economic growth), they may collide in the short run due to the electoral cost of sharing burden with other member states and of competence sharing with the EU.

Since the national interest is represented by elected leaders with a mandate to “defend” it when the latter clashes with the “general European interest”, the former often prevails (national interest bias). Typically, this results in the EU’s punching below its weight and delivering ineffective solutions (the now familiar, too-little-too-late syndrome), as well as in member states’ incapacity to have a meaningful impact at the “systemic level”.

This delays the resolution of the various crises, increases their costs and negatively affects the public’s trust in the EU and in mainstream political parties seen as unable to solve the crises. Overall, decision-making on European and global issues according to national interests jeopardises the ability to protect the key principles at the heart of the European project, such as solidarity, quality of life, unity (see Brexit) and equality among Europeans (large countries disproportionately influence the EU agenda).

Europe needs a strong and vocal constituency made up of European citizens aware of their shared interests and therefore able to act politically to defend them at continental level.

A fundamental change in the way citizens’ interests are articulated at European level is needed in order to build the necessary backing for broadly beneficial solutions. Europe needs a strong and vocal constituency made up of European citizens aware of their shared interests and therefore able to act politically to defend them at continental level. Only then will European political leaders grow in stature and be able to prevail over narrowly-thinking national politicians.

In some respect, we should help in creating a process comparable to the one that led to the development of the so-called “class consciousness” at the beginning of the 20th century and that triggered the creation of political movements defending workers’ rights.

Elections to the European Parliament should have generated such a European constituency but failed up to now. This is because political parties, which historically have the role of articulating citizens’ interests, act at European level as bureaucratic agglomerates of heterogeneous national parties coming together ahead of European elections to find a minimum common policy denominator in order to promote their respective national candidates. Most importantly, they have done so without involving their grass-root membership base, often unaware of their party’s membership in a pan-European party.

If traditional European parties are failing to articulate the European citizens’ interests at European level, some pan-European political movements attempt to do so. One such movement is the European Federalist Party (EFP), which in 2014 joined forces with Stand Up for Europe and took part in that year’s European elections in six countries with candidates defending the same programme drafted and voted on by EFP members from across Europe.

Towards the Europeanisation of European elections

The “Spitzenkandidaten” process, leading to the indirect election of the European Commission President through the European Elections, is probably the most important evolution towards the Europeanisation of European politics in recent years.

It contributed to a more direct identification of European parties with their affiliated entities at national level. However, this is yet insufficient for building a sense of belonging to the same European constituency and the emergence of European leaders proper. A pan-European electoral list, which citizens from across the continent would be allowed to vote on, could address this issue during the next European elections.

We should ensure that each European crisis generates a European debate that gives shape to a European solution.

Looking forward, we should ensure that each European crisis generates a European debate that gives shape to a European solution. Today’s national debates are waterproof to one another, which tends to exacerbate the misunderstandings among Europeans and losing common ground. An pan-continental awareness of the shared implications of each crisis is a necessary condition for creating empathy and solidarity among the peoples of Europe.

Redistributing sovereignty and resources on the basis of citizens’ interests to the most appropriate level would ultimately lead to more sovereignty for the citizens.

Redistributing sovereignty and resources on the basis of citizens’ interests to the most appropriate level would ultimately lead to more sovereignty for the citizens — and not less, as nationalists argue — as people’s interests would be translated into viable policy decisions, which would be able to deliver better results than individual national initiatives. Issues considered of national interest (e.g. sovereignty, budget, welfare, security) should be embedded within a European system of checks and balances ensuring interpersonal, interregional and intergenerational justice.

Finally, citizens should develop a new vision for Europe. At a time when the search for identity is so pressing, it is crucial to go back to the people as the source of political legitimacy, rediscover the principles at the heart of our democracies, determine our long-term shared interest and objectives as Europeans, if not as global citizens, and define the best institutional tools to achieve them.

Such a European debate should be carried out in every city and village through a pan-European participatory process, leading to the definition of a new “social contract” for the 21st century Europe.

Pietro De Matteis holds a PhD in international studies form the University of Cambridge, which he obtained based on a researched conducted in the U.S. (Columbia University) and China (Renmin University). He worked for various European organisations and co-founded the European Federalist Party, a pan-European movement that has now joined forces with Stand Up for Europe, of which he is vice-President. The objective of the movement is to help creating a European political public sphere. In 2014 Pietro stood as an MEP candidate in Belgium.