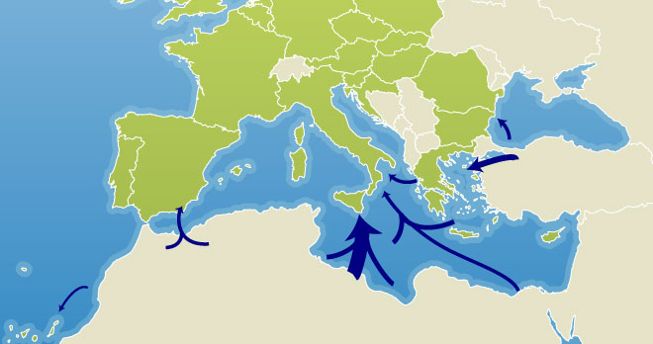 “Europe needs to manage migration better.” This statement was made on 19 February 2015 by Commissioner Avramopoulos, in charge of Migration, Home Affairs and Citizenship, and is spot-on. Europe’s irregular immigration and asylum policies are failing on several fronts.

One is the asylum procedure. The current legal framework for the management of asylum requests is called the Common European Asylum System and is based on the Dublin III Regulation.[ii] The aim of this regulation is to have member states take responsibility for their asylum seekers and make sure that individuals apply in only one state and have their demands rightfully treated. However, the main criteria to determine state responsibility is “first EU country of entry”, meaning asylum seekers are often returned to EU border states, preventing an adequate “sharing of the burden”.

Additionally, the Dublin system is coercive because asylum seekers are sent to countries they do not necessarily want to go to. More than creating a sole “comfort” problem, this pushes asylum seekers to use alternative ways to stay in a member state. A study published by the European Parliament [iii] in 2014 stated that Dublin transfers take place in only around 3% of asylum cases in the EU.

Another failure of the EU’s immigration policies is the issue of irregular immigration itself, which refers in large part to “third country nationals staying illegally”[iv] on the territory of an EU member state. The Schengen Borders Code[v] governs the entry into the territory of a member state, except for the UK and Ireland, the two EU states which are not members of the Schengen Area. After entering the EU irregularly and having been convicted as an “illegal migrant”, the individual is sent back, following the rules set by the Return Directive.

The Return Directive gives some guarantees to migrants regarding the conditions of their stay until deportation. However, as agreed by the European Court of Justice, Member States can issue early expulsion orders and entry bans in substitution of fines. This actually allows the EU governments to impose high fines for irregular entry or stay in order to make irregular migrants choose the expulsion option.

A third failure of the European migration system is the lack of harmony between member state laws. For example, Spain does not penalize irregular entry, whereas France, Italy, Germany and the UK do. On the contrary, while Spain condemns and punishes irregular stay with fines, France does not.[vi]

Although one could argue that these questions remain a part of national policies, it should also be stated that this chaotic organization at the European level only brings inefficiency on migration issues. A European Parliament study reads: “It is the very rationale of the internal market conceived of as an area of free movement of goods, persons, services and capitals, coupled with the Schengen system of no border controls among participating Member States, that is inimical to the Dublin coercive policies.”[vii] The same could be said about national irregular immigration policies.

The current situation does not afford the luxury for EU member states to go on quarreling on the righteousness of managing irregular migration at the EU level. As Commissioner Avramopoulos said in his statement: “2014 was a peak year with more than 200.000 people entering Europe via the Mediterranean. Since 1 January 2015, more than 5.600 migrants were rescued, representing an increase of 50% compared to last year.” Migration needs to be managed better, especially as it often is the cause of humanitarian crises at the EU’s borders.

Tristan du Puy Tristan is a twenty-years old student at Sciences Po and La Sorbonne University in Paris. Passionate about European politics, he is convinced that Europe, as a political entity and a society, has the ability to become a major actor in social and development policies.