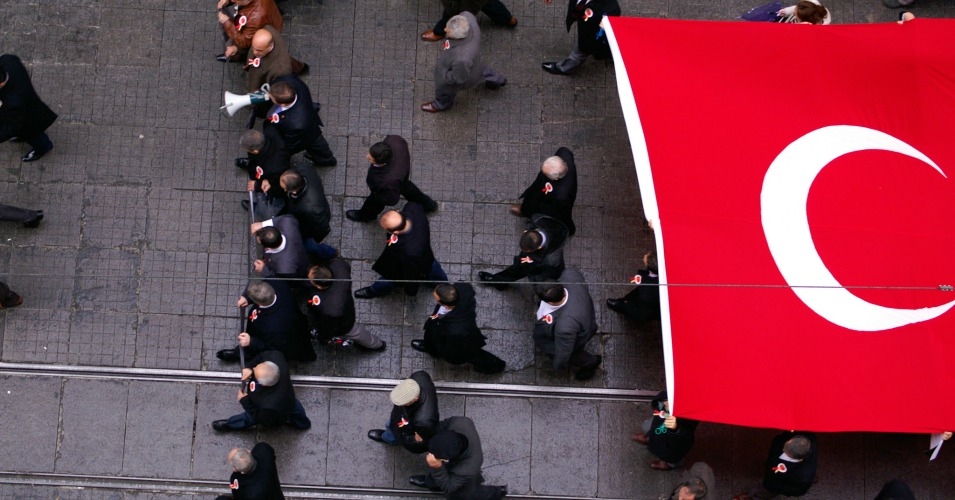 Turkey has opened its first Traitors’ Cemetery in the aftermath of the July 15th coup attempt and Istanbul Metropolitan Mayor announced that the first burial has taken place.

“There is a place needed, to be called the cemetery of the traitors; all passers-by to curse when around it. All those walking by should curse and spit on it; there shall be no resting in peace for them, even in their graves.” – Kadir Topbas, Istanbul Metropolitan Mayor

Some days it feels like life in Turkey is a chapter in a dark and deep dystopian novel. Today is one of those days. On July 20th, only days after the failed coup attempt, Istanbul Metropolitan Mayor, Kadir Topbaş announced his will to open a cemetery for the traitors who participated in the bloody coup on July 15th. According to media reports, the cemetery has just been opened and the first burial taken place.

The first body buried is Captain Mehmet Karabekir who killed the community chief in Istanbul’s Acıbadem neighbourhood on the night of the coup attempt. The mayor announced that the family of the dead did not want his body, so he was to be buried somewhere and the ‘Traitors’ Cemetery’ was the venue for this occasion. The cemetery is located in Istanbul’s Pendik district, at the Istanbul Metropolitan Municipality’s ‘dog shelter’.

Previously, the religious authority of the Prime Minister’s Office, Diyanet had announced that there would be no religious services for those who died in an attempt to overthrow the government through a violent coup. Denial of religious services had previously been discussed for certain leftist/progressive academics and journalists, yet no matter how much reaction there was from right-wing supporters, the services still took place.

However, there are also many unknown graveyards of notable rebels of the state; Sheikh Said, the leader of an Islamist/Kurdish uprising in the 1920s; Seyid Rıza, the religious leader of the Kurdish movement in the 1937-38 Dersim Rebellion; Said Nursi, an influential Kurdish Sunni cleric in the early years of the Republic who later inspired many Islamist movements formation and rhetoric. Their graveyards are still unknown to date.

Apart from rebel leaders, the body of Aziz Güler, who had gone to Rojava to fight against ISIS, was kept waiting for 2 months at the border before being given to his family for burial; and another disturbance occurred when Şafak Yayla, the perpetrator who had taken prosecutor Mehmet Kiraz hostage at the Istanbul Court Palace, was killed, and his family had to bury him in the front yard of the house after violent mobs threatened to attack the body, which finally ended with his family pouring cement on the graveyard.

Attacks against graveyards are also a recurring theme in Turkey’s history. After the 1960 military coup, when the prime minister at the time, Adnan Menderes, and two of his ministers were hanged by Alparslan Türkeş (later founder of far right Nationalist Movement Party MHP), their bodies were buried in a neglected state on İmralı island –currently where the PKK leader Öcalan is kept in solitary confinement. However, Menderes’ remains were carried to a mausoleum in 1990.

The idea of a ‘Traitors’ Cemetery’ and its location at the dog shelter is the new reality in Turkey – a country that feeds on hostility, even regarding the dead. Yet, the word ‘traitor’ is used quite loosely by almost everyone, and who knows, perhaps some of those who are accusing each other of treason might lie side by side in that cemetery someday.