The two educators have been facing a lot of pressure from Turkey’s government over the course of the last two months. They were detained but refused to give up their hunger strike. As they prepared to pass the critical threshold of day 45, members of the physicians’ chamber tried to get their consent for medical intervention if they were to lose consciousness; yet they refused.

The two educators continue their hunger strike in the heart of Turkey’s capital, Ankara; only few hundred meters from the parliament. In a press interview, Gülmen said, “We have lost weight, and are well aware of the risks. We do not want to starve, hence our appeal to those in charge to give us our jobs back.”

Özakça had stated in an interview, “We not only want our jobs back, but we are also struggling for our honour. If we struggle together, we shall win. Our victory shall mean the end of the atmosphere of fear that the government wants to install in Turkey.”

While Gülmen and Özakça continue on day 65 of their hunger strike, several solidarity hunger strikers have joined their cause in other cities and countries. Academics for peace, university students, politicians and artists have staged sit-in protests for a one-day hunger strike and have been on rotation, drawing attention to the heart of Turkey, where Özakça and Gülmen are conducting their strike.

PEN International has released a statement of its concerns for the health of the two hunger strikers; while in the Netherlands, people have rallied in Amsterdam’s Dam Square in solidarity for the pair. 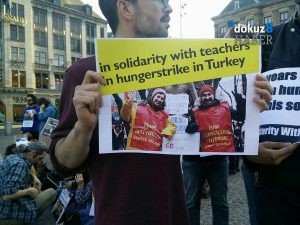 As national and international solidarity rallies have multiplied, drawing attention to injustice and inhumane treatment of the people who have been dismissed with decree rulings and stripped of certain rights, Prime Minister Yıldırım stated that he was unaware of the situation. He asked if the two had been in prison, after main opposition leader Kılıçdaroğlu informed Yıldırım of the ongoing hunger strikes.

After beginning their hunger strike on 10 March, the two educators are reportedly showing symptoms of Wernicke-Korsakoff Syndrome. According to Bianet’s news piece, the Ankara Physicians’ Chamber held a press meeting where it announced that the health of the pair has shown serious deteriorations, which is a signifier of Wernicke-Korsakoff Syndrome. Chair of the Physicians’ Chamber, Vedat Bulut announced that the critical stage has been passed and said permissions for medical intervention should be taken, which the two strikers refuse to give. Gülmen, particularly, has been suffering from a slowed heartbeat, as well as low blood pressure.

10-15% of the people who pass the critical stage of day 45 lose their lives, while 77% lose their lives due to infections in later stages, even after ending their hunger strike. 25% need to be hospitalised and receive long-term, specialised care in order to overcome physical and psychological problems.

Early on the morning of 12 May, the police intervened with the hunger strike sit in on Ankara’s Yüksel Avenue, with reports of many detainees. Following this intervention, 30 deputies from the main opposition Republican People’s Party CHP have written a letter to Prime Minister Yıldırım calling for the reinstatement of the two educators; as the two hunger strikers have called on everyone to join in with solidarity for Saturday and start a one-day hunger strike.

Since the declaration of the State of Emergency Rule, more than 150,000 people have been dismissed from their jobs and lost access to healthcare, education and the employment market, including more than a thousand academics and tens of thousands of teachers. NGOs, unions, student movements and various human rights initiatives have been calling for an end to this unjust treatment and sharing their worries regarding the hunger strikes.