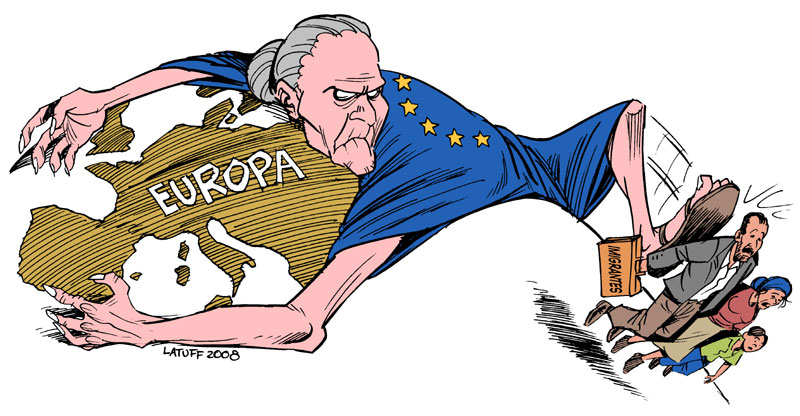 As Europe becomes increasingly xenophobic and populist, the time is right for an open and honest debate on our options on immigration.

The majority of Europeans are unaware of the numbers, reasons and policies behind immigration and the benefits it can bring, so understandably, they fear it.

But have they actually engaged with and got to know anyone from their country’s immigrant community? Just to try and share their concerns with them and see how they are coping in their society, or what they have to contribute?

More essentially, do we understand why Europe’s leaders have chosen apparently the multiculturalism option, rather than trying to keep Europe ethnically “European”?

Apart from our continent’s colonial legacy, Europe became multicultural because it chose to follow the USA in its financial and social policies. After WW2 the European economy was in tatters and so it was forced to copy the American model, whose economic boom was based on immigrants from all over the world, including Europe.

One by one, eventually, most European nations adopted this model and for many years it proved acceptable and successful. That is, until the EU’s 2004 big-bang expansion to the East, combined with the eurozone and refugee crises.

Now that things have got tough, Europeans are reconsidering. But what could be an alternative to multiculturalism? Another rich, industrialised nation with the completely opposite approach that of Europe is Japan.

Immigrants currently account for about 1.75% of the total population, when compared with the average 10% seen in most Western European countries.

Nevertheless, Japan is also under pressure to accept more immigrants as its native workforce shrinks. According to The Guardian, the ageing population and predictions of 8 million fewer workers by 2030 have spurred calls for the government to accept more migrants and refugees.

The debate over whether the country should loosen its immigration laws is becoming more vocal. Shigeru Ishiba, in charge of revitalising regional economies, stated in 2015 that since Japan’s population is in decline, the government should promote policies to accept immigrants into Japan. “It is wrong to think that foreigners must not come to Japan,” he said.

“The government needs to implement policies that do not cause any discomfort for us or for immigrants in terms of language, customs and other areas,” he added.

Taro Kono, the minister for administrative reform and head of the national police agency, said that relaxing immigration laws could help Prime Minister Shinzo Abe reach his target of boosting GDP from the current 491 trillion yen to 600 trillion yen (US$5 trillion) by the end of the decade, as The Guardian reported.

Some may still see Japan as a brave country that stands up for its culture and people, fighting for all it is worth to defend its way of life. And they would be right. Yet they are not fully aware of the country’s economic model or its citizens’ working ethos.

Japan has a welfare system that in some ways makes even the newly dismantled American system seem a model of generosity.

Applicants in Japan are obliged to get help first from their families. Poor, physically able people are not eligible for help – whether they have a job or not.

From some perspectives, this system has worked brilliantly. The country’s already strong family ties have been strengthened and the main safety net is the family rather than the government. The number of Japanese citizens in the basic welfare programme has declined sharply over the last half century, as people have become better off and built up savings.

Today just 0.7% of the population receives benefits – compared with the 4.8% of Americans who get grants from Aid to Families With Dependent Children or the 9.7% who receive food stamps. About 2.3% of Americans receive grants through the Supplemental Security Income programme, which serves the elderly, blind and disabled.

To be sure, Japan’s welfare system operates in a very different context to America’s. Only 1% of Japanese births are to unwed mothers. By comparison, the rate in the United States has now reached 30% and keeps climbing.

Japan also has a far lower percentage of drug addicts than the United States, a much lower unemployment rate, a much more egalitarian distribution of wealth, a greater sense of family obligation and an abiding sense of shame that colours almost every aspect of life, as reported by the New York Times.

Would Europeans work longer for less, to cut immigration?

Europeans love their social benefits and are willing to fight for them. As result, our economies need cheap labour, which results in higher immigration numbers. Would Europeans accept to work longer with fewer benefits, to see fewer migrants entering their homelands and safeguard their cultures like the Japanese?

Perhaps we should give them the choice. One option would be to review our immigration policies and harmonise them across the EU, but we will need strong leadership to make all member states agree. Or we could let the governments of each member state decide their own policies, as they currently do; a system that seems to be accepted by most citizens.

The only problem is that often EU migrants end up paying the price for each member state’s irresponsible immigration policies. Each nation chooses the wrong ones, or implements them for the wrong amount of time, creating divisions between native or EU citizens and non-EU migrants. It is an unfair situation for all at the moment, but that is not the immigrants’ fault.

Since there cannot be single market without the free movement of people, then immigration from within EU must be maintained. It supports the “goose that lays the golden egg” for our continent and gives it a competitive edge. No other region has managed to establish a bigger or more successful single market.

Cheap labour one day, scapegoats the next

Most EU member states – especially the new ones – could be learning from the mistakes of other countries, not repeating them. Sadly, this often is not the case.

In reality our governments look to import labour to exploit in the jobs that we don’t want and to ask for less money. In many cases, these people entered Europe because companies pressured our governments to let them in.

Yet when they go bust or they decide to move to another, cheaper labour market, these people are left in limbo, unwanted and with no job. They end up in ghettos, becoming a perfect scapegoat for any populist government.

This should not be the case. We need clear-cut, fair and fully functioning, ideally harmonised immigration policies across Europe. For the simple reason that if we keep our internal borders open, one country’s messy decisions on the issue will inevitably become everybody’s problem.

Europe should be looking collectively for the type of migrants it needs, by establishing EU immigration offices abroad, in the countries it seeks to attract migrants from. Essentially, before they get on a boat and arrive illegally.

An honest discussion is the only solution

Finally, we should stop terrorising the native population by scapegoating certain ethnic or religious groups. Recently, Heinz Christian Strache, the head of Austria’s far-right Freedom Party, called for a ban on all Muslim symbols, warning that Islam is a threat to Europe.

If that is what Europeans decide then fine. But will they also ban Muslim doctors, waiters, nurses and small shopkeepers that save lives, attend patients, and stay up late in our convenience stores during the Christian holidays, so Europeans can buy the things they need at any time?

If so, then maybe we should limit immigration from Islamic nations. But we cannot encourage people to come over here to fill jobs that we need, then not allow them to practice their religion. Unless of course we want them to be forcibly converted or live in the shadows of our society as pariahs.

However, oppression breeds resistance, clashes and a divided society full of hatred and inequality. There is no reason why we should see our capitals’ streets ending up like many of those in America when we can prevent it by being fair, open and honest.