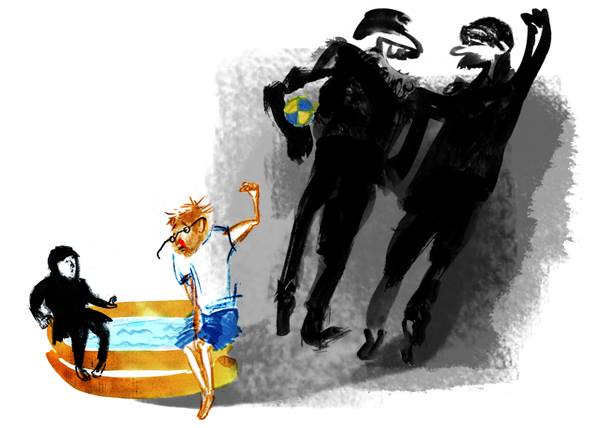 The Burkini ban was another case of oppressing women in the name of their liberation.

Recently, the mayor of Cannes in France issued a ban on burkinis. “Burkini” is a made-up name for a special full-body swimming garment: a hybrid between Burqa and Bikini. In reality, a burkini is a swimsuit composed of leggings and a sort of a short dress worn on top of it. Some burkinis have a hoodie attached and to some other you add a hijab that would cover the head.

I didn’t grow up knowing burkinis. I used to go to the beach and wear a “normal” bathing suit. Later, when I decided to wear hijab, I used to put on a long dress and hijab. In water, this can be uncomfortable and heavy. And when you sit on the beach, it also collects sand and you feel you instantly gained extra pounds of weight.

At some point, I even decided to stop swimming, since I felt so much annoyed by the sand and the curious looks. An experience that was supposed to be fun and joyful turned to itchy and embarrassing.

Later, I started hearing about suits that modestly cover the body but are made of appropriate fabric that does not keep the water. At the time, no body called these suits burkinis. There was no specific name; we just called them swimsuits for hijabis.

I think burkinis first appeared in Turkey and Malaysia. It was originally designed by an Australian designer of Lebanese descent, Aheda Zanetti. I remember one of my friends borrowed a suit from another friend, who bought it in Turkey and took it to a seamstress, asking her to make something similar.

In Tunisia, Burkinis made their appearance on beaches in the early 2000s. Before then, many women swam either in bathing suits; some others in bikini. But many women would wear long dresses or didn’t swim at all. In water, long dresses inflate like balloons, so women have to keep “bursting” these bubbles of air each time they stand up.

Needless to say that with a long dress, you can’t really swim and move fast. You just dip in the water and stay there. Moreover, once outside the water, the wet dress becomes tight on the body defeating the purpose of modesty that a full-body suit is supposed to achieve.

Burkini was an almost ideal solution. It gave women the opportunity to enjoy the water and the beach, swim with her friends, kids and family, without necessarily looking like an alien.

Byuing a burkini in Tunisia during the dictatorship of Ben Ali

I remember the first time I went to buy a burkini in Tunisia. It was like trying to buy alcohol in Canada as an underage. It was 2008. The dictatorship of Ben Ali was still in place, and all sign of religious symbols were suspicious, to say the least. The Burkini, like the hijab, was considered a sign of affiliation with Islamic groups, and selling them was seen as encouraging women to join these movements.

So I went to the souk and I asked around about them. The seller would look at me, assessing my real intentions. Once I passed the “test”, he would bring from – literally – under the table, one or two packages with a different burkini inside each, so I can see the models. But in the aftermath of the Arab Spring, burkinis were freely sold even in large supermarkets, and women who wished to buy one, could freely do so.

Noteably, Tunisian beaches today are full of women wearing burkinis. Even some women that are not wearing hijabs would go for a burkini.

Dealing with the attitudes of the opposite sex

It must be mentioned here that women in bathing suits are not necessarily harassed, but it is very common in some societies for men to stare at women. And so, burkinis is a way to keep off some of these unwanted stares. A burkini has become a way to deal with the attitudes of the opposite sex, since this is a matter of education that has never been tackled.

For people who still consider women covering their bodies as a sign of oppression, burkinis joined the list of words and clothing that linked Muslim women to the world of darkness. For many Muslim women who did not want other people to comment on their bodies or show off their skin for public consumption, a burkini achieved the total opposite. It combined liberation with modesty: the best of two worlds!

The recent decision of the French authorities to ban burkini from the beaches in Nice is but another example of anti-Muslim attitudes wrapped under the disguise of women liberation and combating religious extremism. But the only thing it will achieve is to further alienate French Muslim women and to prevent them from a refreshing swim in the Mediterranean Sea.

The silence of feminists

What bothers and disappoints me even more is the silence of Western feminists, for this is a perfect example of male interference with the choices of women.

When women are banned from driving in Saudi Arabia, western feminists would mobilize and stand up (rightly so) to denounce the arbitrary, abusive, and patriarchal nature of such decision. When women in Iran are punished for showing their hair in public or going out wearing make-up, the outrage among Western feminists is intense. Rightly so. But in this case all you hear is silence or whispers.

In my opinion, the reason for this silence is that the ban on burkini perfectly fits the old equation which equals Islam with women oppression. So why bother?

But how can a country, considered a beacon of rights and freedom, go so low in doing this to its citizens? If toplessness is considered okay, if there are beaches especially designated for nudists, preventing women to swim because of the length of their swimming suit is a silly and revengeful reaction.

Once again, one of the most vulnerable groups of a society have to pay the price for the incompetence and failures of the politicians.

I would like to conclude with the following powerful words by Arundhati Roy, commenting on the banning of burqa in France in 2010:

“When, as happened recently in France, an attempt is made to coerce women out of the burqa rather than creating a situation in which a woman can choose what she wishes to do, it’s not about liberating her, but about unclothing her. It becomes an act of humiliation and cultural imperialism. It’s not about the burqa. It’s about the coercion. Coercing a woman out of a burqa is as bad as coercing her into one. Viewing gender in this way, shorn of social, political and economic context, makes it an issue of identity, a battle of props and costumes. It is what allowed the US government to use western feminist groups as moral cover when it invaded Afghanistan in 2001. Afghan women were (and are) in terrible trouble under the Taliban. But dropping daisy-cutters on them was not going to solve their problems.”

Update: As of August 26, the Conseil d’État, the highest administrative court in France, declared the ban of the burkini illegal and “contrary to the fundamental liberties, to the freedom of conscience and to the personal liberies.” This is a triumph of the rule of law over the whims and the populist electoral agenda of some politicians. Nevertheless, that does not end the burkini story. Some women were humiliated in public, other verbally attacked. Will they receive a public apology? Or will they, once again, pay the price for their choices and decisions?