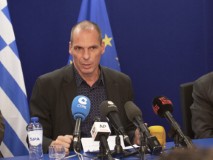 You know what? I was quite right about Mr. Varoufakis. The guy is an absolute thrill for women in Lisbon – as well as all over Europe. Girls between 7 and 77 turn red just mentioning his name. It is the same for German, French and British girls. Two months after his appearance in Eurotown, every European woman knows how to spell a funny Greek name and gets really interested in the news, each time he’s on the TV set, either walking around Downing Street or taking a ride on his motorbike in his leather outfit. On top of that, he is kind enough to smile at Ms. Christine Lagarde, with his Burberry scarf around his bald neck, under his huge chin with a mouth full of funky teenager’s teeth.
You know what? Being in the media business for most of my life, I have still nevert got very well what it takes to be famous, “virally famous”, as some people are right now. Having said this, Mr. Varoufakis’ success is not really surprising to me. He’s an alien in the political mediascape, quite handsome and sexy, especially compared with those politicians and technocrats in Brussels, and probably more assertive and outspoken than all his Maths Teacher comrades.

The other day I was talking to one of my Portuguese female friends who, by the way, has a friend who is completely in love with the Greek Finance Minister only from watching him on the media. She told me that her friend was quite depressed because she realized that he is happily married. – Happily married?, I asked. What do it you mean by that? – Yes, he’s happily married with an ultra-rich, beautiful and famous Greek artist who works on major subjects such as art in nature and blah, blah, blah… He really loves that woman, they have travelled the world together and are really very, very, close. No way is he leaving her!

Puff, I’ve got it! His spin doctor must be his wife, I said. My friend looked at me surprised, probably not at the smart comment, but particularly because of the intellectual spin I was putting on that subject. – Yes, I explained. He’s not sexy to all these European women because he’s powerful, temerarious and trying to save Greece against all odds. No, his political agenda doesn’t make him sexy. In fact, I would guess he must be much more attractive to right-wingers than to left-wingers. Have a look at the Spanish “Podemos” leader. That guy, I would say, is the real left-wingers’ awesome guy. Varoufakis is quite the opposite. He’s strong, and masculine, and bald; he looks as if he’s coming out of the caves to look for some wild animal, not really for social justice! What makes him different from all the other good-looking politicians is his personal style. He’s probably dressed by his wife. At least he has a good adviser and follows fashion with enthusiasm and sense of humour. He has an interesting male figure, but on the top of that comes his stylish dress, beautifully shaven headed, clean teeth and good skin. There’s a stylish woman there, behind him, at his s side or inside his heart…. ☺ I’m sorry, girls!

All these thoughts came to my mind again this week, after seeing the Getty Images/ Paris Match photo production of the Greek star couple. What the hell did she (or his spin doctor, you name it) had in mind to let him fall into this trap! To provide a consistent opinion, I bought Paris Match, looked at the pictures with all my attention and read the text. I read all the comments on the social media. Special attention to this spicy and brilliant conclusion: “Varoufakis is married with a ‘fausse maigre’”. Good, people are cruel!

Getting on track again, of course no one thinks this photoshoot was spontaneous. No one in their senses would imagine that the journalist just followed Yanis home. By the way, he spells his name with just one “n” for aesthetic reasons, said the reporter…(I didn’t get that idea very well, actually…) His wife was there – it looks like they live in her parents’ house, something quite common in Greece, by the way. The reporter suggested: Oh, how nice does your wife look, shall we do some pictures together? And that’s the result.

No, unfortunately, at this level, spontaneity in dealing with the media does not exist. I bet someone in his party, Syriza, was fed up with having a Finance Minister that is seen as a “Teddy Boy, part of a bunch of Teddy Boys that would run away after Merkel’s first bark” – I heard this comment from my dad! – and with a visionary PR approach chose one of Europe´s most read news magazines to match a quite complacent, positive and politically moderate text and interview with Getty Image’s pictures of a lovely, conservative and simple couple in their “cute, little love nest”.

All wrong! Mr. Varoufakis is, aesthetically speaking, an übersexual, as they put it now. Mrs. Varoufakis is a “fausse maigre” blonde, who looks more like a “ronde” Carrie Bradshaw than a desperate Greek housewife. Even if they try hard, they are miles away from the average middle class European mediterranean family. The whole situation feels weird like a Santa Claus on the beach; do you know what I mean?

The media coup, if my impression of their intentions is right, went very wrong. At this very moment, half of Europe’s left-wingers are being bullied by their right-winger friends over this subject. And, you know what? It’s quite stupid to put energy into these matters, but we can always learn from these little things. Maybe my conservative dad is right. Sorry girls, he’s probably just another Teddy Boy ☺

Cristina Dias Neves was born in Lisbon, studied Political and Communications Sciences, started her professional life as a reporter and continued in the  media business as a consultant and head of communications for private corporations.