Take-away cheeseburgers riddled with calories cannot provide proper nutrition. Consuming ever bigger quantities of information does not satisfy one’s need to know what is going on. Europe is muddling through crisis after crisis, unable to come to its senses. Media machines — too big to fail — set the rhythm and our spin-doctored politicians are happy to dance along. Infosumers are properly shocked, carefully enraged, skillfully disoriented, but also hungry for actual content, hungry for thought. What is the share of the new in the news today? Slow down, make sense. 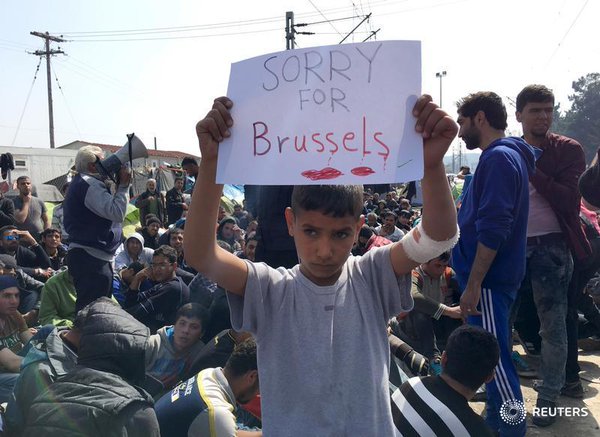 The destructive power of terrorism lies in its capacity to blow up a hole in the fabric that keeps society together. But today’s attacks in Brussels were also, if not primarily, an attempt to jeopardize the rule of law.

It is known that the suicidal fundamentalist shahid, or the so-called “martyr”, is a sort of a saint in the eyes of his supporters. Nevertheless, the terrifying spectacle that he or she creates also helps him or her to acquire a touch of divine (or demonic) nature in the eyes of the Western psyche. A young body is blown to pieces, engulfing innocent bystanders along with it in death, as if not so much by the force of an explosive belt as by the no less explosive force of inner convictions. It is a spectacle as well as a mystery.

As an individual, each of us is vulnerable. But as societies, we are stronger than we think, stronger than we feel on a day like this. This is the precise reason behind the terrorists’ tactics. But clearly, after today’s attacks, a shocked resident of Brussels, as well as a consumer of the mass-media news-coverage, would find it difficult to remember that terror is a sign of weakness and not of strength; that its warfare is asymmetric.

This is why, at this very moment, the terrorists’ wilful accomplices, radicals of all kinds, populists and #hellhole prophets gleefully lick their lips in preparation for their own attacks. But whatever we hear from them in the coming days won’t be new. They too want to polarize or, even, atomize, and make whole societies act as threatened individuals, succumbing to the deadly charm of their extremist thinking.

Hence, now is high time to act as societies. It is the time to uphold the very values that originate in Europe: human rights, equality and the rule of law. In the name of these, we must fight for the inclusion of the disadvantaged in our midst and on our borders, and against bigotry, racism and intolerance. We must do that at least as strongly as we fight terrorism.

“To put Brussels under lockdown might be comprehensible but, in the long run, it will only maim its very life and contribute nothing to its security,” tweeted Eric Corijn, Brussels-based professor and urbanist  . Europe as a whole must also put an end to its lockdown-attitude. A Reuters’ photograph has captured a refugee boy on the Greek-Macedonian border with a handwritten sign in his hands: “Sorry for Brussels.”

The attacks today were a dramatic demonstration that this boy and all Europeans are locked in the very same, bloody struggle. Hence, Europe’s ethical, symbolic and concrete survival depends not so much on becoming a fortress but on accepting and integrating the refugees. An important way to express solidarity with the victims of terrorism is to show solidarity with the refugees and their plight.

Furthermore, I think it would be a simplification to treat the attacks as an act of vengeance for Salah Abdeslam’s arrest last Friday, as the Belgian intelligence services are reported as suggesting.

Suicide also helps terrorists avoid this world’s judicial system. This is an additional efficacy of terrorism since the impossibility to duly process and punish acts of extreme violence leaves the society symbolically traumatized. That’s the reason why Abdeslam’s arrest was a historic moment: one of the first times — if not the first time ever — that an Islamist terrorist, a co-organizer of suicide attacks, was taken into custody alive.

I was hopeful that the machinery of justice would be able to start its slow rolling. The suspect would appear before judges, the families of the victims, and the general public; he would appear as a human with his story, with all his human ambiguities, secrets and weaknesses. He would have to explain in detail his involvement and, maybe, also why he is still alive after what happened in Paris on November 13. I imagined that, with time, his case would become healthily boring, that the civilization’s clumsy, dry-as-dust normality would prevail.

That is why, in my opinion, today’s violent events were primarily an attack on the rule of law. And that’s also why I still hope that the rule of law will be upheld and that Abdeslam will face a fair and just process in court. It seems that today’s terrorists, with whom he might have been involved, desperately want to make him a martyr at all cost. I do hope the Belgian or the French courts will remain as emotionally unaffected and as bureaucratic as they possibly can, that they will treat terrorists for what they are — criminals.