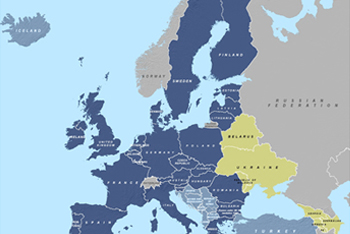 Back in June 2014, the Council of the European Union announced its program under the upcoming Italian, Latvian and Luxembourg presidencies. The document acknowledged that the Fourth Eastern Partnership (EaP) Summit to be held in Riga in May 2015 would mark an “opportunity to evaluate progress achieved in political association and economic integration”. Surely, there will be talk about the current revision of the EU Neighborhood Policy, and particularly of the relationship with the post-Soviet states of Ukraine, Armenia, Belarus, Azerbaijan, Moldova, and Georgia.

According to the Latvian Presidency, the summit will send a “strong signal of long-term strategic support” to the EaP countries, which means that partners will benefit from an inclusive, more flexible approach. There will be discussions about trade, mobility and energy. A declaration of Heads of State will be negotiated and published, probably reaffirming the EU’s commitment to a more adaptable and tailored-made EaP based on its current four priorities: democracy and good governance, economic integration, energy security and people-to-people contacts.

That said, EU relations with Eastern Partnership countries are far from simple. Rather than being a monolithic bloc, EaP members are quite different from each other. For instance, some had thought that Armenia would reinforce its cooperation with the EU by signing an Association Agreement in 2013 – which had already been negotiated – but Yerevan surprised everyone when it announced that same year that it would join a Russian-backed Customs Union. Despite the fact that Armenia is a recipient of EU financial assistance, and that a visa facilitation agreement was concluded in 2014, Yerevan’s decision to join the Russian initiative was not a political move that pleased the EU.

Things are equally complicated with Azerbaijan. Amnesty International has described the country’s human rights record as “abysmal”. Last year, the government arrested several journalists, bloggers and human rights activists. In December, it decided to close Radio Free Europe. For the EU, however, human rights violations seem to be less of a priority than strategic interests. Brussels just launched its Energy Union and Azerbaijan’s plentiful natural resources are essential in terms of diversifying energy supplies. The Commission Vice-President Šefčovič recently travelled to the country to meet the board members of the Southern Gas Corridor. More high-level visits are planned.

The EaP also includes Belarus, Georgia, Moldova and of course Ukraine. EU cooperation with Belarus is at a minimum and there is little chance this will change at the Riga Summit. The EU will, if anything, reiterate its willingness to maintain its “policy of critical engagement” towards Minsk and perhaps note Belarus’ constructive role in the Ukrainian crisis. Things are much more promising with Georgia. An Association Agreement, which includes a Deep and Comprehensive Free Trade agreement (DCFTA), was signed in 2014. Georgia receives a considerable financial allocation and even participates in EU defense missions abroad. The EU also rushed to sign another Association Agreement and a DCFTA in 2014 with Moldova, the citizens of which can travel to the EU without a visa since 2008.

The summit will definitely be dominated by the situation in Ukraine, with France and Germany as key actors in the discussions. Brussels already expressed in 2014 its willingness to expand its relationship with Ukraine through the full implementation of the Association Agreement. Other initiatives have followed, such as the signing of a DCFTA and mobility negotiations.

With two months to go to the summit, Riga has already started preparations. No wonder it feels under pressure, if not to deliver, at least to play along. At a recent meeting of defense ministers in Riga, the EU High Representative Mogherini denounced the violation of the ceasefire in Ukraine and called on Russian separatists to implement the Minsk agreement. At the same time she thanked the Latvian presidency for putting these issues high on the agenda. The Latvian Foreign Minister, Edgars Rinkevics, had declared in January of this year that the country’s rotating presidency of the EU would not be “anti-Russian”. With two of the six EaP countries (Armenia and Belarus) already being part of the Russian led Eurasian Economic Union and with Europe keeping an eye out for new economic partnerships in the region, the summit will be a good place to see how pro-European relationships with the Eastern partners get.