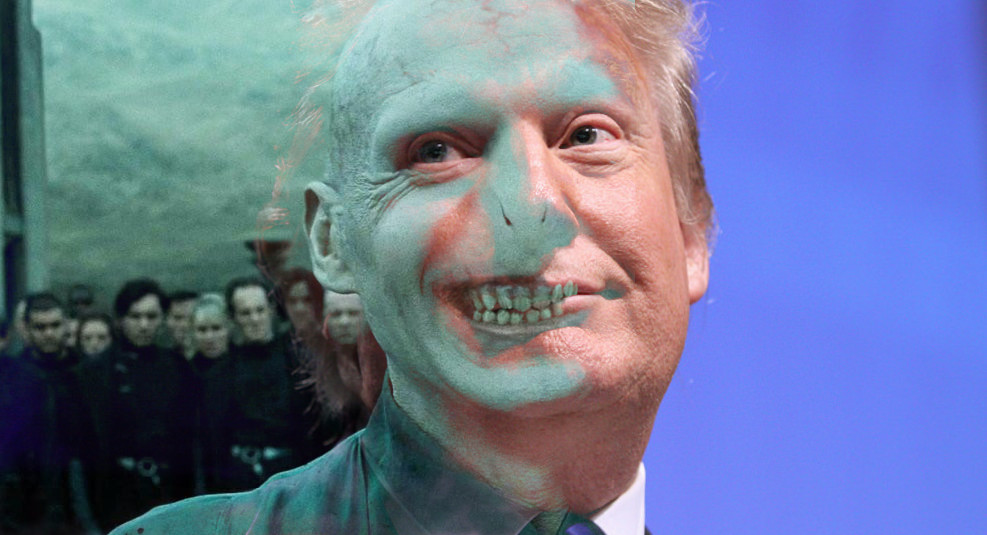 “Around 57 million Americans expected to see Hillary Clinton shatter the glass ceiling. We’ve been fooling ourselves by thinking we’ve all come further than we have.”

“Let’s take care of each other and work harder. This is not over.”
— Jenny Yang

It is not the first time I’ve fled my country just in time. Last time it was Greece, September, 2009. Having spent 20 years in Athens, I moved back to the country of my birth. Never having known it but through the media that trickled through our Hellenic screens, I was to meet the good ol’ US of A, for the first time since I was a year and a half old. It just so happened that it was right before the economic crisis of the early ‘10s really hit the globe, striking Greek society a debilitating blow. I didn’t really know it until I literally saw Athens burn.

After a year as a young American, I was home for summer 2010. Leaving mybar — a small gay sanctuary, one of the few that used to exist in downtown Athens – we were stopped by the smell of smoke.

It’s hard to remember if we heard the glass break then, or if the sound is so vivid in my mind not because I’ve heard it but because of the infinity of violently shattered store windows, which I would see over the next days, months and years. But, I know we saw the fires. We followed the shouts, we walked around the corner and we saw the flames.

It only got worse from there. Not because the violence continued unabated (though it certainly increased and eventually turned itself on minority groups rather than property). What has been most painful to feel is the absolute depression in which near the entire population of the country plummeted, a plight which worsened as the years went by and barely now shows signs of lifting.

When a people feel something in common, it’s amplified. Whether that’s enthusiasm and hope inspired by a charismatic leader or despair brought on by referendums and austerity. Being in the States for Barack Obama’s reign had a dash of the former. The result of the 2016 US elections goes beyond the latter.

About 57 million Americans expected to see Hillary Clinton shatter that glass ceiling, whether they were with her from the get go or ended up having to choose her as the lesser of two evils. Some of us hoped, some thought it a given that there would be a new President Clinton. No matter what disagreement one may have with her politics, it is a fact that her nomination meant a lot to many. As would have her presidency.

Now, it turns out it was a joke. One we’ve been fooling ourselves by continuing to think we’ve all come further than we have. How did we think that in the years of #BlackLivesMatter, minority voters wouldn’t be suppressed? How in the name of Gabby Douglas did we think the country wasn’t going to Lochte it up majorly, in automatically siding with the white male regardless of his actions? How can we fool ourselves into thinking that still using the bizarre electoral system could produce anything resembling a truly democratic result?

“I believe we are experiencing a backlash to President Obama, to better healthcare for all, to Same Sex Marriage”, Michael Horvich captures a feeling that’s permeating the Internet. Where he writes “Obama” let me add “in particular his race”. The Dark Lord Trump’s election is, in part, a result of this pushback, or “whitelash” as Van Jones coined it. And it is also a by-product of misogyny which would have been just as powerfully directed at any other woman, with any other political views, on the ticket for President of the United States.

These views go hand in hand with our older population but are not exclusive to it. “So they must be on their way out!”, you might think. “This isn’t a time to hope an older generation dies out”, counters Asha Michelle Wilson, “We take education and open mindedness for granted, […]. This is a time to extend a hand with kindness, while standing your ground.” Yes, to both.

These ideas are on their way out and we need to be kind and fierce to rise to the challenge. They are going partly because of the age of those who tend to hold them. But also because there has been too hard a push for progress for too long a time, legislation has changed, youth’s views have and are shifting. Thus those who are still tied to archaic thinking are lashing out; galvanized, they rally around an amoral populist who only picked them to begin with because they are dying. Easy prey.

Even worse are those in power who back that predatory behaviour because they stand to gain more. What’s worst is that we are all, on both “sides”, complicit in allowing profit to continue to be the highest guiding principle in our society. Higher than love, higher than decency, higher than common fucking sense. And here we are. We are witnessing the fall of the Empire. The election of He Who Must Not Be Named sounds the death throes of America the Beautiful.

So, why, at this point, should those who hear the noise, who have been let down and shut out, strive now to be kind on top of it all? It is a matter of what will rise out of the ashes to take the old Empire’s place. “Sometimes the bottom must be reached before reclamation, before a cure, before recovery”, as Horvich puts it. If we have hit rock bottom, if that’s where our society is and the worst is about to unravel over the next four years, the only way to go from there is up. We might as well lift with us who we can and fight, once again, for the future we want. 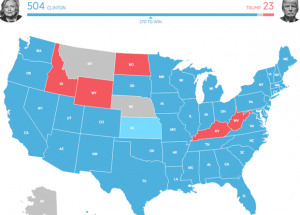 Clinton has a nearly nationwide advantage over Trump with millenials (Source: SurveyMonkey)

It is not only a matter of time. As projections of the oft-maligned millennial voters showed us when contrasted with reality, the course is already in motion but the journey is not complete. We let ourselves think we were there before we got there. So, covered in gravel and with friction burns, we gotta mourn as much as each needs and dust ourselves off. There is a chance for the “hopeful, inclusive and big-hearted” future of Clinton’s concession speech.

We just need to do more work. To reach out across party lines and come together with those who are open to discussion. To protect our youth’s progress in the face of backwards forces. To continue to call out injustice wherever it may show itself, organize, act and shout so loud that we may shatter the system and build anew on equal ground. But above all, to take care of ourselves and our people first so that we may be able to do all the work we need to.

Far be it from me to pretend to bear the brunt of what this election wrought. I am male. I am cis. I count as white. I moved away from Los Angeles in 2015. But I am queer and an American. I was born there, I lived there, I married my husband there. I continue to love the best parts of it and be horrified by the atrocities on which it was built, which it continues to foster. I care for its people, my people there and around the world who are affected by its ebbs and flows. “Change isn’t emotion. It’s real work and organization and strategy”, take it from Michelle Obama.

I got out just in time, once more. I won’t have to feel the sadness as much. The hate-speech and acts of entitled aggression that have already begun might not seem quite so dystopian from Madrid, where I am now. But we are on our way to becoming a global community (it’s already in motion); we must in order to survive. We can not go on divided, fighting and afraid, when our problems are planet-wide. It is not just about America. It’s racism, homophobia, misogyny and xenophobia the world over. It’s All Lives Matter, the Pulse shooting, Brock Turner and Bill Cosby, the Golden Dawn and Brexit.

Greece caved in. There is no coming back for the UK. Yet, among the ruins, we, the American people, stand a chance to stand tall once more. Alongside the absurdity and the absolute disdain we may feel and in spite of the humongous challenges and regressive action we are sure to face in the next four years, we were lucky on November 9th, 2016. The problem has been diagnosed. We have till 2020 to heal as best we can. Voldemort hit and we must survive it. We can all be the girls and boys who lived.

PS: Follow Ijeoma Oluo, Jenny Yang and more community organizers who can lead you into action better than I.