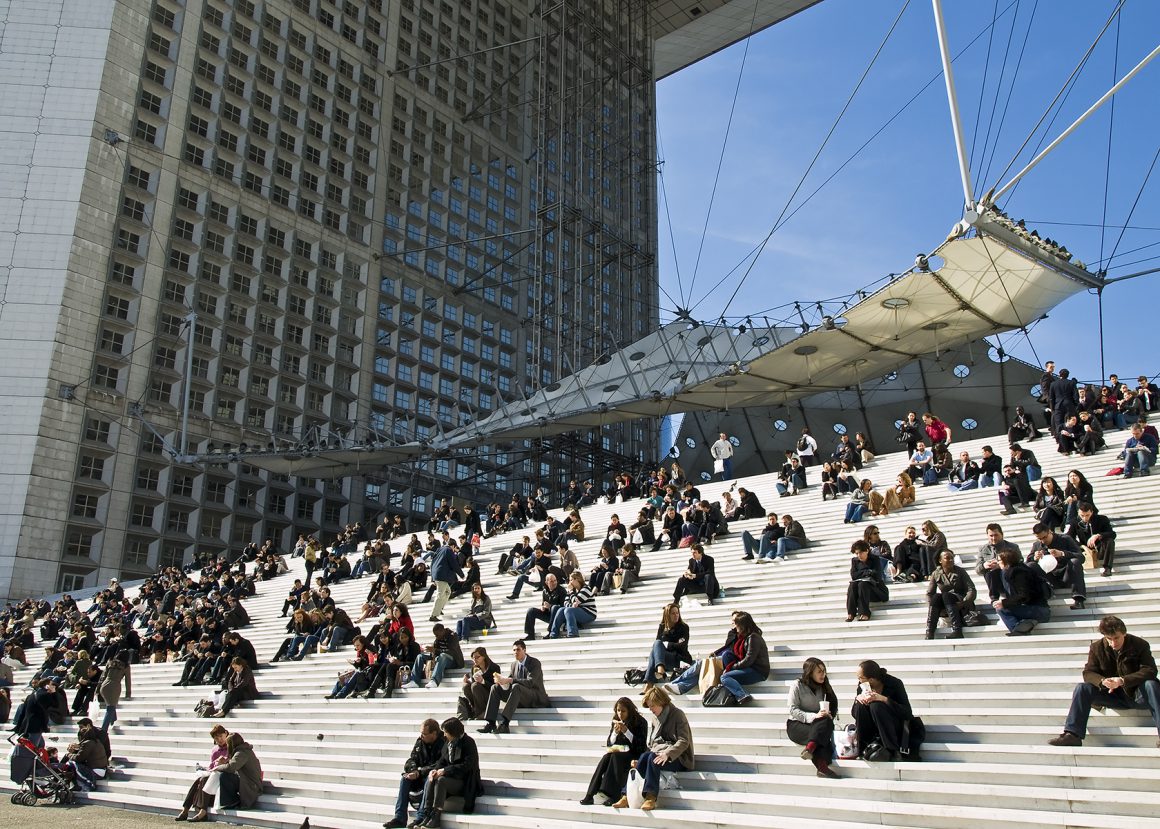 French people in the business district of La Défense near Paris, 2009 (photo: Wikimedia)

It has been one of the most talked and divisive developments in Europe this summer; some French municipalities have been banning the use of the “burkini” on their beaches.

The mayor of one of the French Riviera’s seaside towns has declared “if you don’t want to live the way we do, don’t come.”

“You have to behave in the way that people behave in the country that accepted you, and that is it,” Cogolin Mayor Marc Etienne Lansade told CNN.

The ruling came after more than 30 French towns banned the swimsuit, which covers the whole body except for the face, hands and feet and is worn mostly by Muslim women. Officials have said the ban on the outfit was a response to growing concerns about radical Islamic terrorism.

In some occasions, women were apparently forced to remove their garment by policemen. Even more disturbingly, there have been reports that some of the people witnessing the occasion, were shouting ‘go home’, while others were applauding the police.

Another challenge for the European identity

This is a worrying development that affects not just France but the rest of Europe also. The continent’s public opinion has been long debating its values and where our multicultural model is heading. There is a crisis of cultural, political and societal identity. The refugee crisis, the EU expansion to the East, the euro-zone crisis and the recent Brexit, have all added further stress to Europe’s selfhood impasse.

Some cases, like that of the Brexit, are actually a pristine indicator of the massive shift or confusion of the European public opinion, on its identity or future. Our continent is changing that is for sure. Free movement of people, an ever changing society, economy and political environment are forcing Europe to reinvent itself. And as in every transition period, a massive soul searching is always under way.

European people, like every single person going through change, are trying to imagine or create a future model that they will like to follow and aspire to. Some are trying desperately to hold on to what it is, others are striving to go back to what it was, while only few are looking to the future, open to all possibilities and outcome.

Countries like Britain chose to look backwards and turn to the British Commonwealth for stability and security. Whilst many new EU member states like Hungary and Poland, are trying to resist change and keep things as they are.

Migrants, as well as European citizens with a background of migration, pose new challenges and they will change the current demographic, societal, cultural and political homogeneity of these nations. Especially when we are talking of people with a different race, religion or cultural background.

Very few European nations still fully embrace modernity and the inevitable change that is bringing. What is happening in France is not just a French problem and could potentially spread to other nations — especially, if the terror attacks on European soil continue. People need scapegoats when threatened with phenomena they do not understand or cannot control; they want to see someone paying for their misfortunes and fear.

As Europe is faced with an apparently ever growing threat from Islamist extremists, any reminder of them will become a target. There is no doubt that the burkini ban incidents are directly linked to the recent terror attacks in France; a knee-jerk reaction deriving from anger and fear, plus the very statement that Europe’s enemies would love to receive.

It is a very universal, primeval and deep rooted mentality of the herd: if you want to live among us, look and behave like us or we will kick you out of our group.

It does make sense, of course, when moving to another country and taking its citizenship, one is expected to abide by its laws and values. But is a dress code representative of the secularism, freedom and democracy that make up the core of our values? And, if yes, does enforcing a dress code do justice to our principles?

I personally detest burkas or niqabs, as I see no point of any religious dress-code at this day and age. I do not believe that any dogma and the obvious declaration of it such a burka, have any place in the Europe that we are trying to build. Yet I also think that policing and forcibly making people to abandon their own values, no matter how un-European they might seem, has even less to do with a society I would like to live in.

Assuming that we start accepting policing and dress-code control on Muslim people in our continent, who could be next? Which group will we have to “conform” to fit our values in the future?

Besides, if we are so worried about our culture, thinking that we need to “protect” or “safeguard” it from foreign influences, then perhaps this is a sign of how weak or declining this culture is.

We should be looking at why people who have been living in our continent for decades or even were born here, have failed to integrate in our societies.

Integration comes with acceptance and education. It comes with equal opportunities and recognition. Being an immigrant myself, I must confess any time I felt anger towards my new host country or being rejected by its society, I was rejecting anything indicative of its culture in return.

So if these non-European individuals show signs of “rejecting” our values, perhaps they are doing so because they do not feel welcomed or part of our societies. Or maybe they are not inspired by them. Thus certainly forcefully making them remove their garments is not going to help.

You cannot force anyone to accept your culture or values, you could, however, encourage them to do so by making them feel that abandoning their old ways is making sense for their future. If they choose not to, then we ought to first look at where we have failed as a society and only then debate on whether or not the migrants really belong here or should be “going home”.

If we decide that we do not want immigration into our lands, then we should stop bragging that we are an open and tolerant continent and call a spade a spade; that we do not wish to live in a multicultural society, we reject the current economic model that is promoting and requiring it and we prefer to live in social nationalism or something similar.

But could we accept the consequences, do we really know what that will mean and how will affect our lives?

The future European continent is in our hands. We are designing it right now with our decisions, our votes, our actions and what we stand for. It is a work in process that will take a long time.

We can either become like the nations that we like to criticize on their lack of tolerance and openness, or we will become the complete opposite to them and stick to it. This will be our statement and our answer to their inhuman, conservative, outdated, oppressive lack of progress and modernity.

The Burkini ban was another case of oppressing women in the name of their liberation.

The terrorist attacks in Paris, in the night of Friday, 13 November, have shaken France, the rest of Europe and beyond. Although not the first major attack on the French capital in the course of this year, with the Charlie Hebdo massacre only some ten months earlier, this took terrorism to another level, in terms of audacity and coordination on the part of the perpetrators, and number of victims. With more than 120 people dead and almost one hundred more fighting for their lives, several suicide bombers and indiscriminate killings, this was a scene of Baghdad or Beirut enacted in the heart of Europe, like never before…