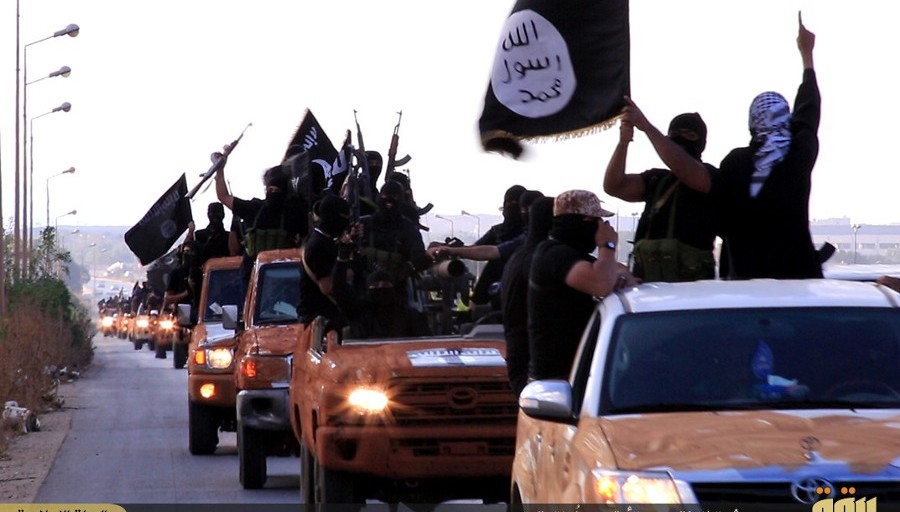 Those who blame refugees and Muslims hide the role of the alliance between the West and the petrol-monarchies.

By Lorenzo Feltrin (Translation from Italian by Carlo Geromel)

As it is well known, terrorist attacks are a manna from heaven for fascists and other xenophobic forces who point to the massacres as a confirmation of their theses: migrants and Muslims are a threat that must be erased in one way or another. To counter such views, repeating sentences like “Not all Muslims are terrorists” or “Most migrants are good people” is just a restatement of the obvious, unable to break out of a complicit narrative.

On the ideational side, it is necessary to remember the far-right nature of the jihadist discourse and practice. Left-wing movements in Muslim-majority countries do not hesitate to point this out. What distinguishes most clearly IS, Al-Qaeda and similar groups is not simply the reference to Islam, which can be found in many other institutions and political formations, but the use of Islam for the promotion of authoritarian, exclusivist, misogynist, pseudo-traditionalist, in one word reactionary values. It is easy to imagine how different the public debate would be if newspapers titled their articles “Massacre by far-right extremists in Paris” or even better “Fascist bastards”! (Sadly, the first page of the Italian national newspaper Libero with the title “Muslim bastards”.)

On the material side, the most important point is often hardly expressed. Jihadi groups would not exist on this scale without the resources coming from the Persian Gulf, particularly from Saudi Arabia, the Emirates, Kuwait, and Qatar – all established allies of the USA and the EU. The American press reported some evidence of early funding to IS and Jabat Al-Nusra (Al Qaeda in Syria) by the governments of Saudi Arabia and Qatar. If direct governmental funding is hard to prove, generous donations from wealthy families and “charitable” NGOs linked to them are certain.

A 2010 WikiLeaks memo signed by Hilary Clinton reveals that most external funding to Jihadi groups came from Saudi Arabia. One would imagine that a quasi-totalitarian regime able to execute its citizens for a Facebook post could easily stop most donations if the political will to do so existed. Moreover, the state institutions of these countries work through a patrimonial system in which the administrative bureaucracy and the aristocratic families interpenetrate each other. Therefore it is not entirely clear what it really means that funding to terrorism is private and not public.

It is important not to be tempted by easy conspiracy theories: there is no evidence (at least for the moment) of any encouragement by representatives of Western powers to keep the flux of dollars going. To the contrary, it is quite clear that the leaders of the USA and Europe do not entertain amiable feelings towards jihadism. However, the interests at stake are too big to act consistently with such subjective inclinations. Since the 1970s, the petrol-monarchies have accepted to sell their oil at “reasonable” prices, to reinvest their profits mainly in Wall Street, and to defend the needs of Western imperialism in the region, particularly for what concerns the Israeli apartheid and the threats coming from Arab nationalism and the Arab Left. The Gulf countries are also giant export markets for weapons and no Western government is really ready to lose such a business opportunity.

However, the human costs of this power configuration are massive. It is not only about the thousands of civilians who tragically lost their lives in terrorist attacks on American and European soil. The petrol-monarchies – backed by the West – are engaged in what seems to be a typical inter-imperialist competition with Iran – backed by Russia. In the search of profitable investment opportunities for their oil rents, the rival regional powers are struggling for hegemony over the Middle East through proxy wars in the weaker countries and through the mobilization of political identities based on religious sectarianism. IS and similar extra-state militias are among the de facto foot soldiers of such conflicts.

Moreover, it is known how oil rents produce a balance of power hostile to the popular classes and favorable to the elites, by generating abundant resources for repression and for the promotion of authoritarian ideology immune to the strike weapon (oil workers are irrelevant in number relative to the volume of money they generate and can thus be easily appeased) and by acting as a blockage to forms of economic development able to modernize societies. The sufferings generated in the Arab world by this blockage to political and economic development are deep and widespread and can generate diverging political reactions.

Since the very beginning, the petrol-monarchies have devoted their efforts to the sabotage of the 2011 Arab Uprisings for democracy and social justice. They have supported Islamist groups of various stripes everywhere, maneuvered to divide the movement along sectarian lines (particularly in Syria), and collaborated with and funded the coup d’état of General Sisi in Egypt (apart from Qatar that supported the Muslim Brotherhood). The defeat, with the partial exception of Tunisia, of the impetus from below of the Uprisings has opened the way to desperation and increased recruitment by far right groups.

If the picture of today looks quite somber, long-term tendencies allow thinking from different perspectives. At the global level, the price of oil is decreasing and the price of labor is increasing (this is probably hidden in the West by the geographical and cultural distance with China and other developing countries where wages and strikes have been on the rise). The undergoing changes in the balance of power will make possible new democratic alliances at multiple social and international levels.

Lorenzo Feltrin (1988) is PhD student at the department of Politics and International Studies of the University of Warwick. He is working on a thesis focusing on patterns of labour-state relations in Morocco and Tunisia in a comparative perspective.

“I feel the pandemic has highlighted the invisibility of people with disabilities,” said the mother of Luigi Gabriel, a 9-year-old boy with cerebral palsy. Throughout history, it has been proven that the most vulnerable groups are mainly affected, in many ways, by the risks related to humanitarian crises. The most recent example is the pandemic…