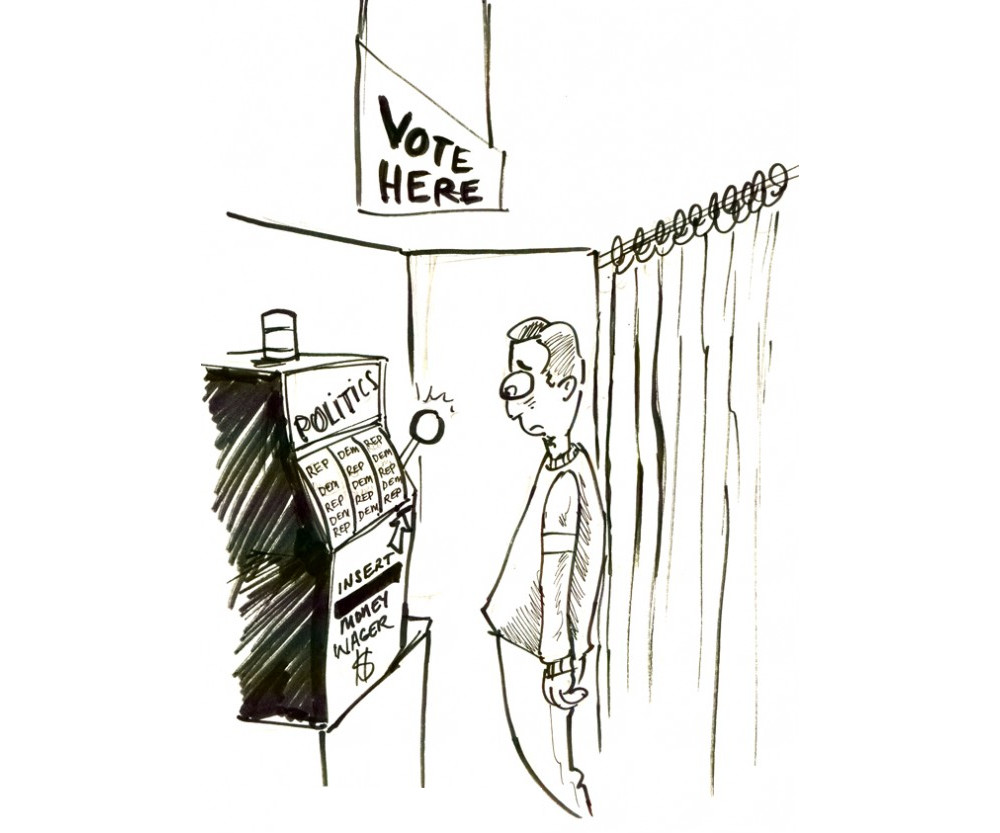 For those staring oblivion in the face, betting on the chances of political change must feel like one more desperate jerk of the lever on the slot machine.

On the 31st of December 1998 I walked, drunk, into a betting shop in Central London to enquire about the odds of global economic meltdown as a result of the Millennium Bug. They demurred and directed me to head office.

You can tell how poor an area is by the number of betting shops and fried chicken outlets.

That addled prank remains my only visit to a betting shop. I’ve never been desperate enough. Living in London for a decade or so I saw them spread like cancer cells across the less salubrious parts of the city. I found it useful to point out to my international students that you can tell how poor an area is by the number of betting shops and fried chicken outlets. They usually spread in malignant clusters, often three or four gathered on the same street corner, particularly in areas like Stratford and Haringey where I lived for several years.

Anyone who, like me, doesn’t frequent such places may be puzzled about their prevalence until they learn about the phenomenon of Fixed Odds Betting Terminals (FOBTs). These have long been known as the crack cocaine of gambling, and in several countries (for example in Ireland) they are banned. FOBTs allow users to stake £100 every 20 seconds, and are largely responsible for bizarre but by no means anomalous statistics: Rochdale, a town in Greater Manchester, staked £72m on gambling machines in 2012; this figure equates to every man, woman and child staking £340 each. There have been campaigns to prohibit FOBTs in the UK, culminating in a parliamentary policy review in 2016, in the run-up to which gambling companies quadrupled the amounts of money and gifts they gave to MPs (including ministers).

I suspect that for some people firms like Ladbrokes play much the same role in their economic life as loan sharks. Given the considerable odds of getting into serious trouble if you borrow money from companies like Wonga, why not combine such risk-taking with a bit of ‘fun’ in a place where they at least give you a free cup of tea?

That’s why I was heartened in 2011 to see the footage above. Although the riots that summer were inchoate, incoherent and altogether regrettable, I can’t avoid the feeling that that particular target got what was coming to it. Just as it’s hard to argue against vigilantes in economically devastated areas who physically attack crack dens and dealers, it cheers me up to see a Paddy Power’s or Ladbrokes with its windows cracked or smashed. At least someone is putting up some resistance.

Anyone spending more than a couple of days in Italy nowadays would start wondering what the ubiquitous phrase scomesse sportive means. Over the last five years of visiting regularly and now living here I’ve seen the number of betting places surge. Here they either take the form of ordinary cafes with a couple of terminals (as on my street corner) or dedicated negozi with blacked out windows. The cafes are generally locally and independently owned places so sports gambling seems more integrated into the social fabric.

As in the UK, it seems that thanks to relentless marketing and team sponsorship being a football fan has become linked with betting on your club’s fortunes. I don’t think that the Fixed Odds machines have been legalised yet but clearly these mini-casinos are sucking up a great deal of very hard-earned cash from a lot of extremely desperate people who have little to lose.

Risk plays an increasing role in our daily lives and we are encouraged to blame ourselves for failure rather than to share that responsibility with the society and its politico-economic order.

If we draw back and think about Europe as a whole, it’s apparent that this form of parasitism has an effect on the general mood. In societies where risk plays an increasing role in our daily lives and we are encouraged to blame ourselves for failure rather than to share that responsibility with the society and its politico-economic order, gambling has become one of the key metaphors for how we conduct our lives. The advertising of gambling companies plays on this very cleverly, and the growth of online gambling means that when we play games like Candy Crush Saga we are betting (or being primed to bet), without being aware of it, often from a very early age.

What results is unmanageable levels of spiralling debt with no way to pay it off but taking more risks. If we’re looking for a reason for the stupid actions of young people in Croydon and Tottenham in August 2011 seeing their behaviour as a form of gambling helps. The social sanctioning of absolutely irresponsible activity led huge numbers of young people to gamble that taking a TV from a looted shop would have no consequences other than better quality film nights. The debt they paid as a result was very punitive custodial sentences and ruined life chances. Crime is, after all, a form of gambling.

The terrible odds of ‘taking back control’

No wonder people want to ‘take back control’. The chance that the Brexiteers’ promises and threats (£350,000,000 on the NHS, millions of marauding Turks) would turn out to be true were clearly minimal, but for many people it was better to bet on that than to continue in the certainty of ongoing economic annihilation. Humans take terrible odds when they’re desperate. As Daniel Kahneman points out, that’s what we do in relation to the climate: the odds of catastrophe are so overwhelming that we gamble that that mythical 3% of scientists are right, and we ignore scientific fact and the evidence of our own senses. The possibility of finding meaning through dedication to jihadism is pretty small, but nihilistic young men take that chance rather than betting on continuing monotony and irrelevance. When buying food we gamble that one more kebab or piece of fried chicken will give us the energy we crave without damaging our physical selves beyond repair. Gambling may well be written into the way social media works – as this terrifying article explains in depth, liking a post or retweeting quite possibly triggers the same emotions as sticking more coins in a slot machine.

Then, of course, there’s voting. The odds that Donald Trump, Marine le Pen or Beppe Grillo will be able to resolve the multiple crises that engulf us are practically zero. The same goes for Jeremy Corbyn and Jean-Luc Mélenchon. However, given that so many are locked into spiralling debt and staring social and economic oblivion in the face, betting on the chances of political change, not matter how remote, must feel like one more desperate jerk of the lever – or least a way to give the machine a big hefty kick, just in case it pays out when you’re standing nearby. Modern gambling mechanisms work entirely on that emotional tug, the rush of endorphins that comes from taking a heart-stopping risk.