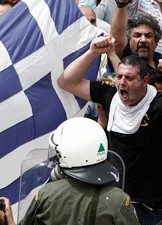 One month ago, the Bruegel institute, a respected and influential EU think-thank, published an opinion piece by former IMF staff member Ashoka Mody. In his excellent analysis, Mody relies on leaked insider information and IMF self-criticism to condemn the Fund’s role in the Greek bailout process from 2010 to the present. In short, he reminds us that the lack of debt restructuring during the 2010 bailout was primarily aimed at protecting the holders of Greek bonds, e.g. the major French and German banks, despite its unsustainability. Then, he underlines that the structural reforms and the budget cuts worsened the economic and social conditions in Greece to such an extent that a second bailout was needed in 2012. Yet, this new money was mainly channeled to the recapitalization of the Greek banking system while more austerity was imposed on Greek citizens. Mody’s conclusion stresses that the IMF should be consistent with its own criticism and, thus, needs to end its demand for further austerity and forgive much of the Greek debt.

The lack of debt restructuring during the 2010 bailout was primarily aimed at protecting the holders of Greek bonds, e.g. the major French and German banks, despite its unsustainability.

What Mody tells us here could be heard in any Economics 101 classroom: when there are debtors, there are also creditors. Even though Greece has been crippled by its own problems (mainly the tax-evading oligarchs), its bailout has not been designed to solve those problems, but to protect the major European banks. In other words, the IMF is admitting not only that the brutal lowering of living standards in Greece was not caused by its past problems, but was also counter-productive.

What Mody does not tell us is that the IMF is by far not the only political player to blame for this misleading bailout; in fact, the European institutions were dominant within the Troika. Paul Blustein, a renowned business journalist, reports that the IMF wanted to restructure the Greek debt as soon as March 2010, but Jean-Claude Trichet, the former ECB president, “blew up” and shouted that debt restructuring was not an option in a monetary union. This story is consistent with the July 2011 events, when the ECB threatened the EU governments that it would refuse the Greek bonds in its refinancing operations in case of a debt restructuring. Finally, a compromise was reached in 2012: the Greek bonds bought by the ECB since 2010 would not be affected by the restructuring and the central bankers would give back the interest they generated. Today, the ECB is still withholding the € 1.9 billion it promised to transfer three years ago as a means of pressuring the cash-strapped Syriza government.

The structural reforms are not designed to alleviate economic problems or to boost “growth potential,” rather, they should be understood as a punishment and a dissuasive weapon for potential sinners.

Besides, in Greece, both the Commission and the ECB asked for tougher austerity measures than the IMF. This pattern already existed in 2008 when the three institutions dealt with central European countries’ financial problems. In both cases, the rationale was the same: the European institutions were worried about giving “wrong incentives” to the EU countries, which should respect the rule of the Stability Pact. In other words, the structural reforms are not designed to alleviate economic problems or to boost “growth potential,” rather, they should be understood as a punishment and a dissuasive weapon for potential sinners.

Another fundamental difference between the IMF and the EU institutions is that the former recognizes its past mistakes while the latter are still denying them. More precisely, Benoit Coeuré, a member of the ECB executive board, claimed during his 2014 testimony on the Troika activities led by the European Parliament that the MEPs should not “blame the fire brigade for fire damage.” He also underlined that the reforms are necessary, so their implementation must be expedited while the rise of unemployment should be understood as an adjustment process. Furthermore, in 2013, the Commissioner for Economic and Financial Affairs Oli Rehn criticized the IMF critical report on the Troika activities by claiming that the fiscal multiplier used to calculate the global impact of budget cuts was accurate and that this debate was unhelpful.

Austerity is socially dangerous and not economically efficient. The EU’s denial is not just about Greece; today Portugal is singled out as the bailout poster child by the EU institutions.

It would take too long to demonstrate how wrong this analysis is; it is sufficient to remember that austerity is socially dangerous and not economically efficient. The EU’s denial is not just about Greece; today Portugal is singled out as the bailout poster child by the EU institutions. In a recent European Parliament hearing, Mario Draghi stated Portugal was reaping the benefits of its reforms, as exemplified by a slightly falling unemployment. When Draghi was asked whether this slight fall could rather be caused by the 300,000 citizens who emigrated from the country since 2011 than by the few jobs created by the reforms, he chose not to answer.

Past crises and transitional justice have taught us that there cannot be reconciliation without truth. The IMF took a first step by recognizing its past mistakes; following Mody’s advice would be a brilliant second one. If the EU institutions want to save what’s left of the ideals of the European integration, they should follow in the IMF steps and stop hiding behind twisted moral arguments and economic fallacies.