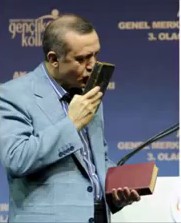 For many people, seeing the president of a democratic republic, obliged to be “non-partisan” according to his country’s constitution, publicly bashing the main political opposition parties in government while waving a religious text in his hand is something that comes as a shock and is difficult to comprehend.

For Turkish citizens, this is a regular day.

After serving as Prime Minister in the Justice and Development Party (AKP) Government from 2003 to 2014, Recep Erdogan turned his ambitions toward the highest office in the land: the President of the Republic. On August 2014, Erdogan was elected to be the presidency after the country’s first popular presidential elections.

By then, rumors were already spreading about a possible change from a system where the president is largely a symbolic and powerless role to one which would be a “Turkish style of presidentialism” where the President would be directly in charge of all decision-making processes.  Not long after the elections, the rumors were officially confirmed by the governing Justice and Development’s Party’s (AKP) official spokesman, Huseyin Celik, who stated that “when a president is elected by the people, it means that it will be a semi-presidential system.”

In light of this, the upcoming parliamentary elections on June 7th will mark a turning point not only for the Turkish political environment, but for the country itself.

For many people, seeing the president of a democratic republic publicly bashing the main political opposition parties while waving a religious text in his hand comes as a shock. For Turkish citizens, this is a regular day.

If the Justice and Development Party obtains a majority of 400 seats in the 550 seat national assembly (a 2/3 majority), it could then change the Constitution to modify the current system which they claim to be “unsuited” for Turkey, thus, opening the way for Erdogan’s ambitions of becoming the new Caudillo of this century.

However, if the Party gets anything below that number, any proposal for a constitutional change must be done through referendum– the only hope for the entire Turkish opposition to ensure that Turkey does not fall under an authoritarianism that is becoming more repressive every day.

Fighting the AKP is not easy. The electoral threshold in the country is one of the highest in the world, where amongst many political parties, only those who win at least 10% of the national vote can secure their presence in Parliament.

Until now, the main opposition in Parliament has been the centre-left Republican People’s Party (CHP) and the far-right Nationalist Action Party (MHP). While the Kurdish parties were never able to pass the threshold, the newest left-wing and pro-Kurdish People’s Democratic Party (HDP) has been gaining wide support, not only from Kurdish regions, but also from left-wing youth that no longer identify themselves with the party’s increasing rapprochement to the center.

These 3 main political parties could, and probably would, fiercely oppose each other on a variety of subjects. However, the will to stop Erdogan from eliminating the country’s current parliamentary system is more than enough to unite them for the time being.

The only hope for the entire Turkish opposition is to ensure any constitutional change be implemented through referendum, so that Turkey does not fall under an authoritarianism that is becoming more repressive every day.

With the weak Prime Minister Ahmet Davutoglu unable to raise popularity and ensure votes for the Party, the constitutionally “nonpartisan” Erdogan has currently returned to addressing the masses, using anything and everything to ensure his propaganda will be effective and votes will be cast in his name in the upcoming weeks.

Is there any hope for Turkey? Well, there certainly is.

Unlike Erdogan’s other projects that always received support from the masses, the idea of changing the system has been received rather skeptically. The public opinion of the country’s economic transparency has declined over the years, with 57% of the population believing the level of corruption has risen.

With his own supporters starting to question his abilities to be the ultimate “leader” and growing voices from the opposition parties, chances are that Turkey will still continue to be a parliamentary system, at least for the time being.

Deniz Torcu has a degree in Economics and previously worked for the Spanish governmental organization Instituto Cervantes and the Turkish National Commission for UNESCO. She currently studies International Relations at Instituto de Empresa in Madrid as the Turkish scholar for 2014-2015.