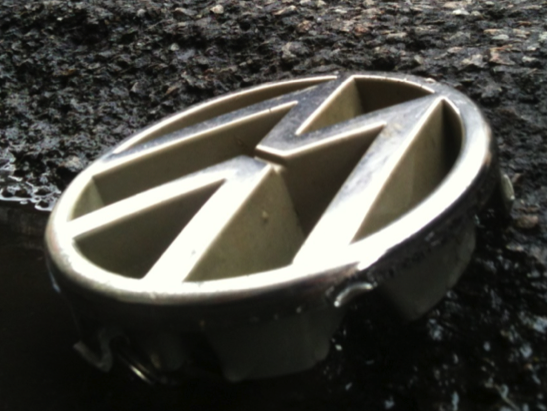 My wife and I, we’ve been driving a diesel Volkswagen for years. And we were quite happy with our Golf. Until now.

What we know is that we couldn’t get a green sticker back in 2008. We lived in Berlin and the city introduced an environmental zone in the centre. Instead, our car got a red sticker and was no longer allowed to drive along Unter den Linden. The authorities explained that as following: because our car was produced in 2000 its engine did not comply with the allowed emission standards.

But from what we now learn from the news, it seems that the actual, deeper reason was a different one. Probably, our car simply did not have that “proper” software installed—a software that allowed cars to produce up to 40 times the legal quantity of nitrogen oxides and never fail a test.

The Guardian estimates that the fleet of rigged VWs has been producing a total of 1 million tons of additional pollution a year, which amounts to the combined annual emissions for all power stations, vehicles, industry and agriculture in the UK. And with around 30,000 deaths a year that air pollution is estimated to cause there, one can have a fair estimate of the death toll due to a massive deception that even the Italian Mafia could be proud of.

I’m less interested in the financial consequences the scandal will have for Volkswagen. I’m just wondering whether somebody will end up in jail. I think somebody should but doubt it that somebody will. Corporate misdeeds largely go unpunished. For corporations, fines and court settlements are but incidental costs, even if they amount to billions. And so dirty games may sometimes prove expensive, but more often than not they are very profitable.

Stepping down from his position as Volkswagen’s CEO, Martin Winterkorn assumed full responsibility but said he was not aware of “any wrongdoing on his part.” Here is a working paradox: Mr. Winterkorn is guilty and innocent at the same time, almost just a victim of the circumstances despite also having been the head of VW’s Technical Development. A scapegoat or a culprit? The chances are we’ll never know. We blame the system and let suspects walk away—free and rich.

Bloomberg reports that Mr. Winterkorn has amassed a fat pension of close to €30 million. Additionally, depending on how VW’s Supervisory Board classifies the termination of his contract, he might take home another 30m—twice his yearly salary—as compensation. And the way the Board representatives praised “the enormous contribution of Herr Prof. Dr. Winterkorn” to the company during a press briefing tells me they’ll be lenient.

Nevertheless, the profit-racing of a corporation should always disturb us less than the criminal negligence of politicians. According to the Financial Times, EUobserver and others, the German government might have been aware that Volkswagen had installed the software in some of its diesel cars as early as July, several months before the scandal broke out in the US.

World’s export champion Germany knew but did nothing to question the integrity of one of their biggest producers. And knowing that the auto-industry lobbyists start their letters to the Chancellor with “Dear Angela,” we should not wonder why.

The revelations cast a dark shadow on the entire industry. But, what’s worse, Germany-led Europe in its entirety now appears shrouded in a foul smell. The Union that seemed the bastion of environmentalism and of regulations protecting the rights and health of consumers is now being openly ridiculed by US neoliberals in the media.

My wife and I, we’ve been wanting to exchange our VW Golf for a newer model for some time now. And, of course, we’d be glad to stay loyal to the “people’s car”. And so, as we heard the news, our first reaction was to hope that the prices on Volkswagen’s cars would drop as quickly as their stocks. But we need to reconsider our attitude to the trademark “Volkswagen”, much the same way that Europe should now reconsider its attitude to the trademark “Germany”. Momentarily, the two seem embarrassingly conflated.

Krakow is perhaps the most famous city in Poland. Its history, beauty and architecture attract thousands of tourists and students annually. However, all its splendour is being clouded by microparticles which float in the air, invisible to the eye but toxic, and which penetrate surreptitiously into the body, causing serious damage to the health of those who inhale them. Can you imagine a child (or anyone else, for that matter) smoking 2,000 cigarettes a year?