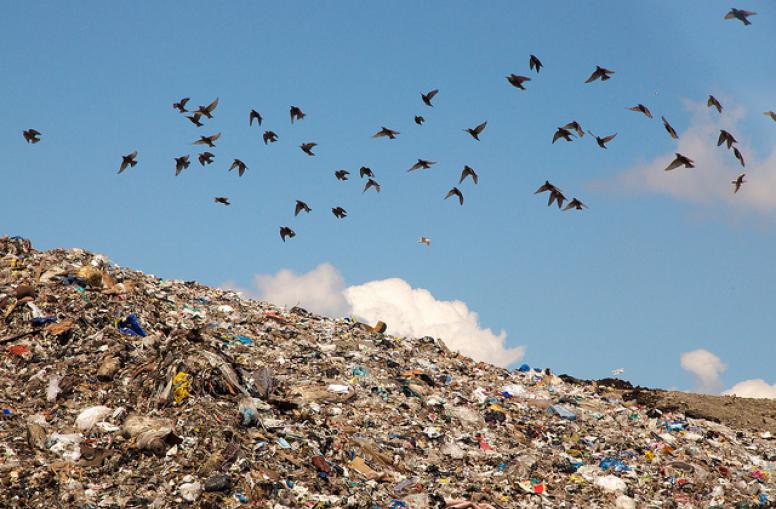 During my years as a student of economics, I developed a particular interest in ecology and new ideas such as sustainable development and the collaborative economy. These appealed to me as revolutionary means to develop a more sustainable society.

Following these ideals, I became an entrepreneur and launched an urban agriculture business in Brussels. We produce healthy and sustainable food from organic waste which is subsequently transformed into compost for urban gardens. Economists call this a ‘circular economy’, or the art of revaluing trash as treasure.

The recent upsurge of political and business interest in the idea of a circular economy raises a crucial question: is it a real game changer or just another trend that will soon go out of fashion? How can companies such as Apple, H&M or Nestlé claim to “accelerate the transition towards circular economy” and receive prizes for their “considerable achievements” in the field, and yet simultaneously continue polluting? All the while, their business models encourage and rely upon a system of endless consumption and economic growth.

Should I still be proud to present my urban farm as a model of the circular economy then? Or is my definition of circularity as faulty one as the one put forward by these brand-name companies? Are we really looking in the same direction and pushing for the same economic transition?

From linear to circular

I was recently invited to speak at a seminar on the circular economy in Brussels. During the seminar, the consulting firm Accenture released its latest study. This study defines circularity and highlights five business models that rely on it. For example, one of them is called the resources recovery model, which entails considering one company’s trash as another company’s treasure and/or its own treasure.

According to this report, circularity provides an answer to the volatile and finite supply of natural resources as well as to the increasingly evident environmental limits that drive prices and create market uncertainty. The purpose of circularity would be to decouple growth from its reliance on scarce resources, and to foster innovations that enable us “to do more with less.” 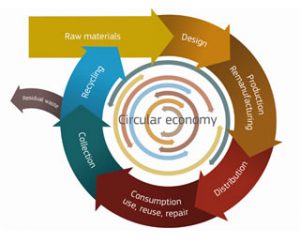 Circularity has been seen as a form of constructive criticism of the predominant business model that rests on volume-increases through economies of scale, and the squeezing of costs through greater efficiency in the supply chains, factories and operations. It differentiates itself from the linearity of the current supply chains, the so-called “take-make-waste” model. Instead, it focuses on “closing the loop” and preparing for “inevitable resource constraints.”

The myth of decoupling

Closing the loop seems to be the logical solution to the resource scarcity problem we are experiencing already. Yet, one might have serious doubts about this solution.

As Tim Jackson and others have pointed out, a relative decoupling – the reduction of natural resources used per percentage of growth – is not sufficient to address the resource scarcity issue. In fact, even if you use fewer resources to produce one consumption unit but you keep on increasing the production volume, the absolute impact on natural resources will continue to increase. While this might sound simple or intuitive, its implications are essential. Closing the loop without questioning the unlimited growth paradigm does not bring us any closer to a better use of natural resources! Doing less bad is not good enough.

The way circularity is interpreted by H&M, Apple or Accenture in its aforementioned study is a public relations stunt, or ‘green washing’. None of these truly try to move to a “closed loop” model.

The many meanings of “circular economy”

Similarly to other so-called trends such as the “collaborative economy” or the “green economy”, many people who claim to accelerate the transition towards a circular economy focus too much on economics and not enough on circularity.

However, rather than eliminating the term “circular economy” just because some companies misuse it, we should help spread its true meaning. It may simply be a matter of redirecting existing political and corporate will.

Great projects have been carried out with the “label” of the circularity in sectors that really need it. In Belgium, for instance, the company Derbigum transforms and recycles old bituminous roofing materials into new roofing membranes. Taking into account the heavy ecological footprint of such roofing materials, this is a great step forward for the construction industry. We shouldn’t make the mistake of discrediting all initiatives, including those of genuine progress, on the basis of abusive labelling done by some.

Instead, more radical economists should enter the public debate and push for a more holistic definition that can be adopted by public and private authorities.

Get rid of the core business idea and go for local

According to Gunter Pauli, there is one element that rules the corporate world’s culture and modus vivendi: “the focus on the core business and the unfettered belief in growth ad infinitum.” He argues that in order to reach economies of scale, companies focus on core business and competencies. This results in a search for ever lower marginal costs through standardisation and the elimination of all outside activities through outsourcing. By doing so, they hinder their ability to create value along their supply chains and thus perpetuate the damaging linearity of the system.

For Pauli, circularity can only be achieved with an eco-systemic approach where each element of the economic chain contributes to the overall performance, which in turn generates several income streams.

Additionally, Gunter Pauli stresses the importance of focusing on the local. The drive should be to generate more value locally, using locally available resources (natural and human) and allowing the local circulation of money. This is a fundamental shift from the current status quo of global trade and competition.

Finally, the definition of circularity would lose its coherence if it didn’t include the notion of absolute decoupling. To be circular, one should integrate the finitude of the planet and, therefore, the limits to growth. This bring us to the “simple living” lifestyle characterized by individuals being satisfied with what they have or genuinely need, rather than what they want.

Until recently, I was convinced that the circular economy provided an ideal replacement for the “business-as-usual” model and its insatiable and ultimately lethal need for growth. I was extremely proud to present my urban farm as a concrete model for a circular economy.

Yet, experience has taught me to become more nuanced. I continue to be proud to set up a business that demonstrates it is possible to overcome the core business dogma and foster the local economy. Yet, I believe it is just as important to keep in mind and acknowledge the limits of the circular economy fever. While the circular economy does a great job in improving scarcity management (i.e. the more sustainable use of limited resources) by enabling us to do more with less, it fails to ask the question why we need more in the first place.

The strength of such an idea as the circular economy lies in its ability to join together a wide range of stakeholders to act for sustainability. However, its strength may very well be its weakness. After a while, consensual ideas such as sustainable development lose their transformative power and become appropriated into the capitalistic business cycle, just as it happened with the green economy idea.

One of the few things ecologists and economists agree upon is that time is a scarce resource. The pressure on natural resources continues to increase and consensus decision-making takes too long. More than ever, we need a radical change.

In his most famous work, Schumpeter stressed the role of the entrepreneur as a disruptive force in the economy. More than ever, they need to take this responsibility and reinvent their role within the limits to growth.

Sevan Holemans is co-founder of Le Champignon de Bruxelles, a start-up company active in organic waste regeneration in urban areas. He holds a Master in European Interdisciplinary Studies from the College of Europe (Natolin) and a Master from the Economic School of Louvain. As an entrepreneur and former student of economics, he is particularly interested in the link between economic theory and practical applications.