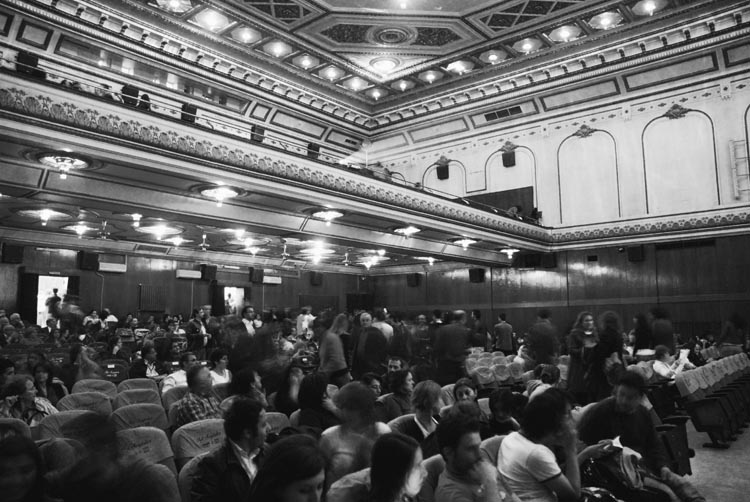 The 8th edition of Istanbul’s Which Human Rights Film Festival (WHRFF) was launched on December 9th, on the eve of the International Human Rights Day. The opening ceremony was a tribute to the city’s iconic Emek Movie Theatre, demolished in 2013 to make place for a shopping mall.

Three years after the unsuccessful attempt to defend the heart of the city’s cinema scene, which also paved the way to the Gezi resistance movement, hundreds of viewers gathered at Şişli Urban Cultural Centre for the premiere of the documentary Audience Emancipated: The Struggle for the Emek Movie Theater.

The premiere coincided with the opening of a cinema multiplex under the name of “Emek Hall” at the Grand Pera shopping mall that was constructed on the original site.

The original Emek Movie Theatre was as old as Turkish cinema itself. Located in the historical building of Cercle d’Orient (built 1884) the cinema opened its doors to public in 1924. It was originally called Melek Sineması or Angel Cinema as a reference to the Art Nouveau angel sculptures at the entrance of the former structure, and was the oldest cinema hall in Republican Turkey.

The building was originally constructed for purposes other than film screenings. Among others, it used to serve as a theatre hall and as the gathering place for Istanbul’s cultural life. Its giant hall and the lounge, which could welcome hundreds, was ultimately found suitable for film festivals.

Located on Istiklal, one of the most crowded avenues in Europe, the hall had been the home of Istanbul Film Festival for decades and the most popular cinema hall in the country for almost a century. It had left a deep mark in the social memory of the city. 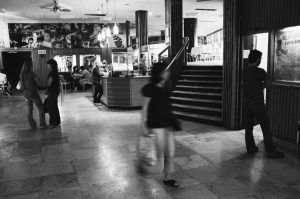 Writing about a cinema-goer, Yusuf Atılgan, an early republican Turkish novelist, argues of the importance of being able to walk out into the city after watching a film and to be part of the society in order to digest what she or he had just watched.

Yeşilçam (Green Pine) Street, at which Emek’s entrance was located, gave the name to Turkish Cinematosphere. For Turkey, Green Pine is what Hollywood is for the US.

Emek cinema was not just any other movie theatre screening expensive international productions with profit-oriented mentality but a social space, which allowed young directors and independent films to find a screen and flourish.

At the opening of the WHRFF, the Cultural Center was filled with activists, architects, directors, researchers, students, labourers, former managers of Emek and many other people. They arrived well ahead of the screening to be united around the memory of the lost movie theatre and the ongoing struggles for presence in the city.

The famous banner of Emek was placed in the hall, reading “Emek is Ours, Istanbul is Ours”. Many old friends met once again under this banner, the excitement was palpable. 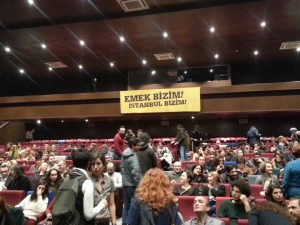 “Emek is ours, Istanbul is ours” (Photo: Gürkan Özturan)

Audience Emancipated captures the activism for the right to the city in Istanbul, such as the Emek is Ours Platform and their years-long struggle against demolition or neglect of cultural spaces, low-income residential neighbourhoods and parks.

The 48-minute-long documentary summarizes the stages of demolition and resistance against it, stating the significance of this building for the cultural life of the city and the lure of profits for the investors, despite the court decisions marking the structure for preservation and other court decisions dictating a halt on demolition/construction works.

However, experts, architects, the judiciary and even internationally renowned directors, such as Costa Gavras, stated opinions against demolition of the structure. And even though there were given many official decisions by courts to stop demolition, none of these were heard by the government, municipality, investors and construction companies went ahead with their plans.

Now, a shopping mall enchants the luxurious consumers of Istanbul in the increasingly de-cultured and profiteering atmosphere of Istiklal Avenue.

In the film, the mayor and construction company experts explain to the media how the Emek Hall will be preserved, not at the street level on ground floor but, thanks to the “modern preservation technique called ‘moving’, it will be dragged to the eight floor of the new shopping mall, exactly as it is.” This statement caused an uproar of laughter during the screening.

After the screening, there was a period of discussion, quite emotional moments as the two former operators of Emek cinema came up on the stage. They had avoided the construction site in order not to see the demolition three years ago; and they had seen it for the first time, on screen. Their hands were shaking as they held onto the microphone and spoke about the times when they thought they’d be running Emek for their whole lives. 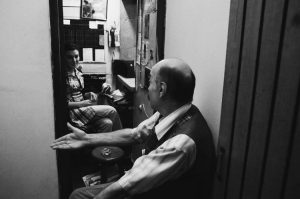 Right after them, Master Architect Mucella Yapıcı, the general secretary of the Turkish Union of Architecture and Engineering Chambers, Istanbul Metropolitan Branch, took the stage and emphasized the significance of reclaiming the city and social memory. She drew attention to the destructive populism wave of demolishing urban spaces and living areas for humans and animals, as well as trees in the city. As a final remark she reiterated the importance of not giving in and losing morality in the face of this expanding threat. “We must continue putting things on top of each other, building up culture and future,” she added.

In the discussion after the screening, there was a consensus to boycott the shopping malls and unsocial profit spaces that destroy and demolish the memory of the city without even asking the people suffering the consequences or living there.

The trailer of Audience Emancipated: