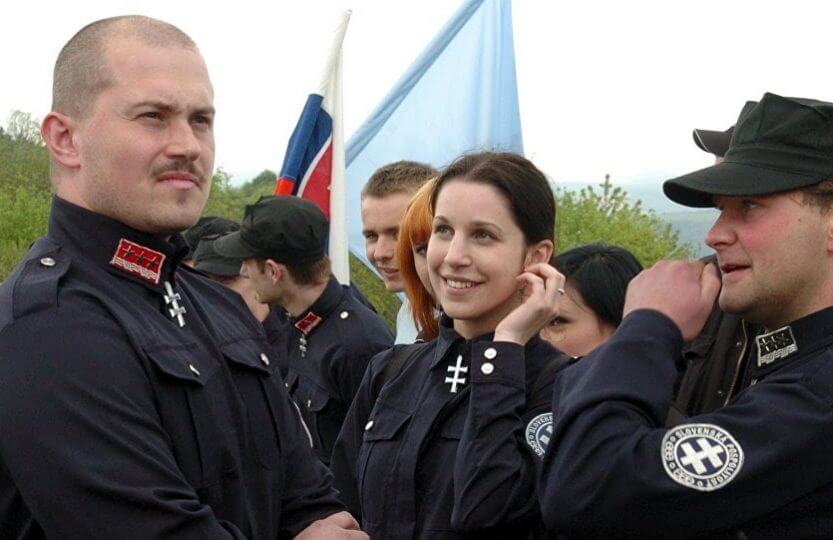 Lukáš Likavčan is a philosopher, environmental activist, and regular contributor to A2larm.cz.

A few weeks ago, the Slovakian NGO Institute for Public Questions (IVO) released the results of a comprehensive quantitative survey focusing on the online behaviour of young Slovaks. It came to quite a few important and staggering conclusions: the media immediately jumped on the revelation that the party with the most support from voters aged between 18 and 39 (although it remains somewhat questionable whether middle-aged people should be considered “young Slovaks”) was the People’s Party of Our Slovakia (Ľudová strana Naše Slovensko – ĽSNS) led by the infamous fascist leader Marián Kotleba.

Nevertheless, the survey tells us that around a quarter of young Slovaks would vote for ĽSNS and ninety per cent of them have no qualms about their style, political program and plans. Furthermore, a third of Slovakia’s youth openly sympathizes with the values and activities of the party. During the last parliamentary elections, when ĽSNS gained over 8% of the vote, it had the support of 22% of first-time voters – and their electorate consisted of 70% of people under the age of 39.

What is even more striking is the amount of support for concrete measures proposed by ĽSNS. For example, over 66 per cent of all respondents agree with lowering the social benefits for the Romani – meaning that an explicitly racist policy is now a part of young Slovaks’ political mainstream. Another surprising popular consensus was reached on the question of downsizing the one hundred and fifty-member Parliament by fifty, which is supported by more than 70% of Slovak youth.

Perhaps the most interesting, however, is the critical stance half of the respondents take towards the current democratic regime.

This phenomenon is less surprising if we look at the other parties mentioned in the survey: it turns out young Slovaks favour obscure parliamentary entities such as “Sme Rodina” (We Are Family – an anti-immigration party led by controversial businessman and tabloid celebrity Boris Kollár), the nationalist SNS resurrected by popular nationalist Andrej Danko or the movement OĽANO-NOVA headed by Igor Matovič – a man whose political program remains in a perpetual state of quantum superposition.

The obvious question would be: which was the first? Did ĽSNS invent its eclectic critique of democracy or did it just become a channel for the anger of the young generation, a reflection of deeper socio-economic inequality that cuts through the entirety of Slovak society? All the governments to this date polished to perfection their art of ostracising the poor: either by enforcing austerity policies, as was the case with right-wing cabinets, or by fanning the flames of ethnic hatred during the monochromatic rule of Robert Fico.

The employment policies of Slovak governments have displayed signs of labour precarisation for a long time, and together with their investment policy, this resulted in a situation where we can find the sixth richest region in EU, Bratislava, in the same country as the extremely poor areas of central and eastern Slovakia, such as Rimavská Sobota, Revúca, Velký Krtíš, Kežmarok, Gelnica, Trebišov, or Sabinov. It is no coincidence that some of these places lie in the Banská Bystrica region, for the last three years led by the fascist Kotleba.

These areas suffer from high unemployment as well as the lowest education level and room space per person in the country. Households without fresh running water are a fairly common sight. The poverty line in Slovakia is set to 347 euro and 640 000 people are directly threatened by poverty, many of whom are families with children.

Demographically and geographically, Slovakia is a textbook example of a semi-peripheral late neoliberal country.

Its geographical distribution consists of the centre (Bratislava and part of the Trnava region), semi-periphery (the cities of Trenčín, Žilina, Banská Bystrica, Košice, Nitra and Poprad plus their satellite towns and villages), and periphery (most of the rest of Slovakia, apart from regional centres). The economic and educated elite is concentrated exclusively in Bratislava, which functions as a regional accelerator of sorts – by catapulting individuals and companies into cosmopolitan networks, like a giant electric socket that leads into the currents of global capital. Even the location of Slovakia’s capital on the Western edge of the country is self-explanatory.

But as is often the case with capitalism, most of the money is concentrated in a very few places and trickles outwards only in incremental amounts. You can easily see the real face of Slovakian structural poverty that afflicts entire communities – less than a hundred kilometres from Bratislava. This is the reality hundreds of thousands of Slovaks have to live in: its fundamental qualities are boredom, futility, loss of any perspective for personal or communal life, and the ever-present feeling of deep uncertainty. This poverty is ethnographically documented for example in the tracks of the rapper Čavalenky from the Slovak-Czech border.

Material-wise, it would seem obvious that the strong support for ĽSNS is the latest expression of long-term socio-economic deprivation of a large part of Slovak society. The critical attitude towards liberal democracy is the direct result of the soul-destroying everyday reality experienced by Slovaks – not just the poor, but also the wide spectrum of precarised employees in both the state and private sector.

A high school teacher, a nurse, an assembly line worker in Detva and a store clerk in Nové Zámky earn the same pittance. The hope for better working conditions is a privilege reserved for the people in the economically strongest regions and the best jobs are – and will be for another decade or two – taken by the generation that was economically active during the late eighties.

Unless you live in Bratislava or nearby, your life will most likely consist of the tempting combination of thankless senseless work, boredom, slacking, idiotic TV culture, unsatisfactory relationships and, eventually, unplanned children.

If you happen to be in luck – that is, if you graduated from a solid high school, if your parents managed to pay for your student lifestyle in Bratislava (or, even better, abroad) and if you managed to actually graduate in an at least slightly interesting field as opposed to just getting dead drunk (networking, it’s called today), then you might become a part of a liberal social bubble consisting of roughly 25% of Slovakia’s youth.

If this happens to be the case, you are living in a parallel universe that runs on rules, cartography and temporality completely unrelated to the regional reality of Slovakia. You are more likely to defend the status quo and prefer slow, gradual changes for the better over the radical turn desired by those betrayed and repressed by the unholy union of neo-liberal capitalism and liberal democracy.

According to the IVO survey, this segment overlaps with the electorate of the Sloboda a Solidarita party (SaS), which currently represents a rather contradictory hybrid of every liberal political school of thought imaginable, diluted by the “pragmatic” racism of its chairman Richard Sulík.

The public in death throes

The general political orientation of young Slovaks indicates an oft-repeated variation on a theme well-known outside Slovakia: the exclusion of the Left s from the wider public debate. Given the media dimension and political climate unnaturally steered towards the Right for the entirety of the first two decades of independent Slovakia’s existence, the results described in the IVO’s survey are only logical.

Youths brought up in this atmosphere will inevitably incline towards rebellion against the established order by converting to the extreme Right – because progressive left-wing alternatives are simply inconceivable for today’s university students. Without a strong parliamentary and non-parliamentary Left (especially in local government) it is all too natural for the primary anti-system forces to be fascists and maniacs. And it is only logical that instead of a wide array of realistically electable parties ranging from the left to the centre, there are only one or two opposition parties in the vein of SaS – eclectic by definition since they have to accommodate for all the contradictions brought by appealing to voters from all over this unrepresented spectrum.

Another survey results that is also worth our attention is the lack of an easily defined relationship between political orientation and digital literacy. It turns out the young voters of the fascist ĽSNS are the most active when it comes to looking up information online (right above the voter base of SaS) – although they often resort to sources typologically similar to Breitbart News.

Anti-systemic thinking is fueled by false alarms, hoaxes or conspiracy theories; these can entertain and articulate one’s political views in exactly the same way as criticism based on working with mainstream media sources. From the point of view of search engine algorithms and social networks segmenting content for end-users, there are no real differences between these two kinds of infotainment.

And it is digital platforms that are becoming the meta-media of today, generating social realities and creating mutually impermeable bubbles. The public, as the nexus of communicative activity in Slovakia, is slowly ebbing out – as society takes a downward spiral towards becoming a constellation of parallel universes on a dangerous collision course.

Lukáš Likavčan is a philosopher, environmental activist, and regular contributor to A2larm.cz

This article is republished as a part of an editorial cooperation with PoliticalCritique.org.

Lukáš Likavčan is a philosopher, environmental activist, and regular contributor to A2larm.cz.

As the name suggests, the United Nations (UN) should represent the union of all nations around the globe. However, it is far from the truth. We are all living in a disparate world in which every country is speaking its own language. There is no cohesion even when the problems, in general lines, are the…

The mission of the United Nations is to maintain international peace and security. As we enter into a new decade in the midst of a global pandemic, this mission should be held with even higher regard than it has in the past. The UN We Want for the World We Deserve should comprise of states…