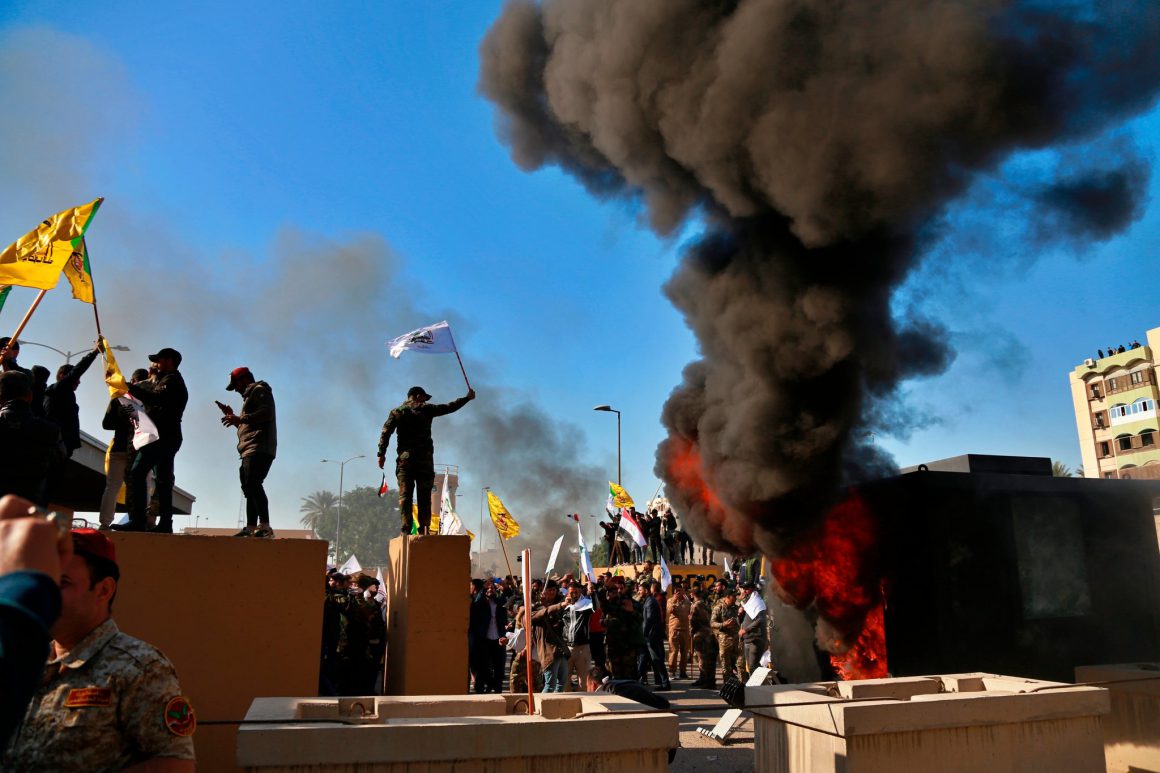 Pro-Iranian protesters backed by many members of the same militia broke into the American Embassy compound last month in Baghdad in response to the American airstrikes. Credit: Khalid Mohammed/Associated Press

The United Nations Secretary-General, Antonio Guterres, began his first 2020 press conference with the following words: “The New Year has begun with our world in turmoil. We are living in dangerous times. Geopolitical tensions are at their highest level this century.”

His words brought me back to my January 2014 visit to the provincial city of Kerman in Iran, of which I mostly remember Kerman’s famous cardamom flavoured Kolompeh pastry. The contrast with the huge crowd mourning Major General Soleimani in Kerman this January 2020 is staggering. The contrast mirrors developments in United States (US) – Iran relations. In January 2014, Iran was preparing to sign the Joint-Comprehensive Plan of Action (JCPoA), already rolling back some of its nuclear programme in return for sanctions relief from US and EU sanctions. In January 2020, the United States (US) and Iran stood at the precipice of war following the dramatic storming of the US Embassy in Baghdad on New Year’s Eve by supporters of Iranian-backed Iraqi paramilitary groups, the targeted assassination of Soleimani by an American unarmed drone in Baghdad on 03 January, and the retaliatory missile strikes on US bases in Syria and Iraq on 08 January. Although the immediate threat to international peace and security seems to have subsided at the time of writing and tensions have thawed, three additional facets of this geopolitical cataclysm severely undermined international law, global governance, and International Cooperation.

First, a day after the assassination of Soleimani and in response to Iran contemplating retaliation, Donald Trump threatened via tweet that in preparation the US “targeted 52 Iranian sites … some at a very high level & important to Iran & Iranian culture.” This threat immediately sparked global condemnation given that targeting cultural heritage sites is prohibited by a host of international agreements signed in the Hague and Geneva, which are a cornerstone of the laws of armed conflict. In 2017, the United Nations Security Council passed unanimously a resolution condemning the deliberate destruction of cultural heritage and unequivocally labelled it as a war crime. Even if Trump backed down a couple days later, such threats reject international legal norms, weakening global efforts to limit civilian suffering and societal destruction during warfare.

Second, as part of an immediate response to the assassination, Tehran announced on 05 January that it was ending its commitment to the 2015 JCPoA limit for the enrichment of uranium. The unilateral exit by the US from the Nuclear Deal in 2018 already marked a nadir for international anti-nuclear proliferation efforts, but this decision renders the nuclear deal all but irrelevant. The High Representative of the Union for Foreign Affairs and Security Policy Josep Borrell made a valiant attempt to salvage what remains of the JCPoA by stressing that “it is the only place where we can sit together with the Russians and Chinese to talk on a multilateral basis about many risks that we are facing.” But given the difficult position of European Union Member States, there is only very limited diplomatic space to incentivise Iran to refrain from seeking nuclear arms. As such, global anti-nuclear proliferation governance has been dealt a serious blow, further weakening common global responses to this existential threat.

Third, on Monday 06 January, it also became known that the Trump administration is refusing to grant the Iranian Minister of Foreign Affairs Javad Zarif a visa to the US to address the Security Council during its 09 January meeting. This is in violation of the terms of the 1947 US-UN agreement that requires Washington to permit foreign officials into the country to conduct UN business. As former UN assistant secretary-general for legal affairs Larry Johnson clarifies: “any foreign minister is entitled to address the Security Council at any time and the US is obligated to provide access to the UN headquarters district.” Refusing Zarif’s visa is part of a broader effort to politicise the granting of visa’s for diplomats from countries deemed hostile to US interests. UN representatives from China, Cuba, Iran, Nicaragua, North Korea, Russia, and Syria have indicated to the UN that they experience increasingly restrictive limitations. Denying their ability to participate in the UN severely undermines the contemporary foundation of multilateralism and international cooperation.

So-far the tensions have already cost the lives of the 176 civilians aboard the Ukrainian passenger jet shot down above Tehran by the Iranian military due the heightened tensions, but If military escalation returns war could break out across the Middle East. This could cost the lives of tens of millions of individuals and further undermine international law, global governance, and international cooperation. The US needs to dismantle its militarized hegemony and cease its increasingly despotic use of coercive power while Iran needs to refrain from retaliation and the spinning up its Uranium centrifuges. Sustained diplomatic pressure from both US and Iranian allies will be crucial.

In his New Year message, the UN Secretary-General was clear and simple about what is to be done: “Stop escalation. Exercise maximum restraint. Re-start dialogue. Renew international cooperation.” The alternative would entail violence on a horrific scale and potentially existential run-away nuclear proliferation risks.