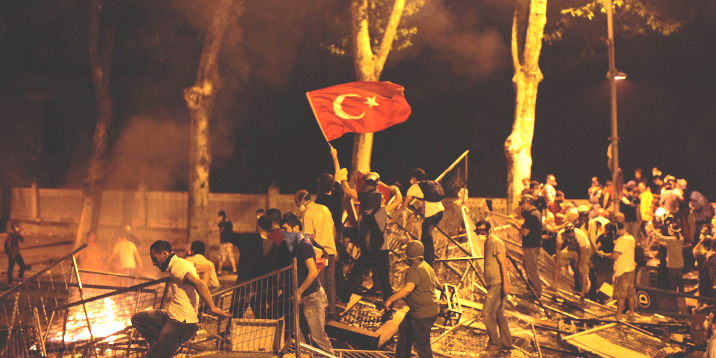 The coup failed, but democracy did not win.

The attempted coup on the night of Friday, 15 July, was a surprise for both Turkey and the international community at large. Despite the history replete with coups over the course of the twentieth century, no one foresaw a further – albeit weak – attempt to take power this century.

A faction within the Turkish army, allegedly linked to Fettulah Gülen – an Islamic cleric residing in Pennsylvania for decades in a self-imposed exile – attempted to take control of the Turkish state in a rather clumsy manner, hardly even closing bridges or sending tanks to the major airports, while the main target, Recep Tayyip Erdogan, was able to quietly call a halt to his holiday on the southern coast of Turkey, to connect with the media on his mobile phone.

As soon as he had landed safely at Istanbul’s Ataturk Airport, Erdogan appealed to the people to take to the streets.  His call was immediately followed by thousands of supporters and echoed by numerous mosques which began the call to prayer, to support the government and fight against the army rebels.

And at first light on Saturday the 16th, Erdogan announced that “the democratically elected Prime Minister and Government are in charge of the situation and all will end well”. Within a few hours, large rebel factions of the army began to give themselves up to the police, who remained loyal to Erdogan throughout.

In this fierce struggle for absolute power between two Islamist factions, Erdogan has definitely won over one of them.

The failed attempt led to more than 200 dead, over 1,400 injured, nearly 8,000 police agents suspended from duty, and about 7,500 members of the judicial and military authorities arrested, including several generals. In this fierce struggle for absolute power between two Islamist factions, Erdogan has definitely come out on top.

However, the hasty reading some analysts and international media have made of all this is a mistake. Democracy has not won. The attempted coup will enable the current government to justify its curbing of freedoms and greater Islamisation of the country.

The ultimate, undisguised goal of Erdogan is to increase his constitutional powers, transforming the system of parliamentary democracy into an authoritarian presidential system, where no dissenting voices may be heard without suffering reprisals from Erdogan’s allies.

For years, the AKP government, ruled as a movement run by one man, Erdogan himself, has aligned the general public with his autocratic model, polarising society to an alarming extent. The model of secular republic promoted by Kemal Ataturk is now being replaced by a populist nationalism that seeks to create a new Ottoman Empire anchored in the fundamental principles of Islam.

Freedom of expression is being brutally suppressed and a war against Kurdish rebels has been reinitiated, the consequences of which are making themselves felt across the entire country. The ultimate, undisguised goal of Erdogan is to increase his constitutional powers, transforming the system of parliamentary democracy into an authoritarian presidential system, where no dissenting voices may be heard without suffering reprisals from Erdogan’s allies.

The general public in its entirety is already suffering this restriction of freedoms first hand. According to the Reporters without Borders 2016 world ranking for freedom of the press, Turkey comes 151 out of 180 countries. Repression ranges from the case of a 16-year-old student who was arrested for insulting the Prime Minister to reprisals taken against the former Miss Turkey for sharing a poem critical of the Prime Minister on the social networks.

Since 2002, several news agencies have been expropriated by the government, to then be handed over to companies close to the AKP. Tax inspections and tax penalties have been used to intimidate other media, who have been forced to censor themselves to avoid offending Erdogan. Any journalist who is critical of the Government is fired and, in some cases, imprisoned. Currently, more than a dozen journalists are still in prison and several foreign journalists are under threat of deportation.

The social networks have also been suffering a great deal of repression, and several networks have been blocked in times of crisis so that the Turkish public have no access to other news sources. In 2015, Twitter made it public that more than 70% of requests for content removal in the first half of the year came from the Turkish authorities.

Freedom of expression has not been the only freedom which has suffered under the AKP government. With the new legislation passed in 2013, it is illegal to sell alcohol any location less than 100 metres from any educational institution or mosque. This has meant the prohibition of the sale of alcohol in most of the restaurants around the country.

Imposing a new, increasingly hostile and strict Islamist lifestyle, Erdogan did not hesitate to make public his ideas that women and men, by nature, cannot be considered equal, and that a woman who is not a mother, is incomplete as a woman; hence, his proposal that all women give birth to at least three children or more, and give up their professional life to be housewives.

If limits to [Erdogan’s] power are allowed to disappear, and an Islamist authoritarian regime is left to consolidate its position, the darkest days for Turkey will not be far away.

A military coup can certainly never be an answer to these cutbacks on freedoms, or a solution to any problem of lack of democracy and not just because of the dramatic consequences of the violence it involves. It is a mistake not to realise that Erdogan is far from being a “hero of democracy”, but rather a serious threat to consolidating this, in the absence of any checks and balances. If these limits to power are allowed to disappear, and an Islamist authoritarian regime is left to consolidate its position, the darkest days for Turkey will not be far away.

Governments and civil societies within the international community must understand that this coup attempt which has failed will merely help to further tighten the authoritarian control and cruelty of Erdogan’s government and his mafia of followers, to appropriate religion and the State to the point of seizing absolute power and stamping out the merest shadow of opposition.

An old Turkish saying goes that when you have to choose between two terrible scenarios “you must choose between death and malaria”. A successful coup would have been death. An even more authoritarian, self-absorbed Erdogan, and holder of absolute power, as will be the result of this failed attempt, will be malaria … or even death too. Only time will tell.

Deniz Torcu is an economist with a Master’s degree in EU Studies from the University of Istanbul and in International Relations from the IE Business School, Madrid.