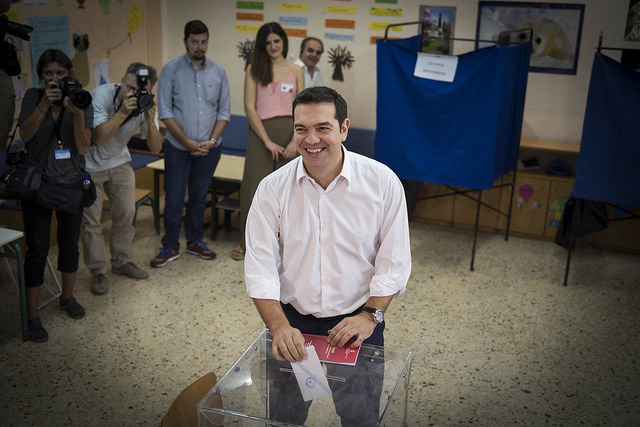 Despite expectations of a neck-and-neck struggle between SYRIZA and New Democracy, Alexis Tsipras’ party is the clear winner of the 20 September general election in Greece. With about ninety-two per cent of the votes counted, SYRIZA has received 35,53% and 145 out of 300 seats in the Greek Parliament, while Evangelos Meimarakis’ New Democracy comes second with 28,04% of the vote and 75 seats. Mr. Tsipras has already announced that he will form a coalition government with Panos Kammenos’ Independent Greeks (ANEL), who got some 3,67% of the vote and 10 seats. The other parties which passed the 3% threshold for entering parliament are the neofascist Golden Dawn with 6,95% and 18 seats, the centre-left PASOK and its coalition partners with 6,27% and 17 seats, the Communist Party (KKE) with 5,59% and 15 seats, To Potami with 4,12% and 11 seats, and the Centrists’ Union with 3,40% and 9 seats.

Mr. Tsipras’ victory is even more impressive if one considers that he lost less than 1% from the percentage of votes it had received in the 25 January 2015 elections, when he was promising an end to austerity for Greece. Having accepted a new bailout agreement after several months of tense negotiations with its Eurozone partners and creditors, SYRIZA managed to survive the disappointment of the Greek public and its frustration with new austerity measures, bank closures and capital controls. The party also survived the departure of several of its more left-wing former MPs, who established a new party, Popular Union, which got only 2,87% of the vote and stays out of parliament.

The next challenge for Mr. Tsipras is to prove that he and his new government can actually govern and deliver on the expectations of both, the Greek population who are looking forward to less austerity and a working economy, and Greece’s partners and creditors, who are watching closely to ensure implementation of the third bailout package. The opposition parties, from New Democracy to PASOK and others, are promising constructive engagement and even support for the government on key issues, as they did in the previous parliament with the bailout package itself. Despite the pain of defeat, the opposition leaders say and probably mean it that they want to see the new government exhaust its term, or at least serve a good part of it. In addition to the country not being able to afford any more elections in the immediate future – there were already three this year, if one also counts the 5 July referendum – opposition leaders undoubtedly realize that they need time to reorganize their parties, if they want to ever challenge seriously the predominance of SYRIZA and Mr. Tsipras.

Both New Democracy and PASOK need to do further soul-searching and atone for their mistakes during their many years in government following the fall of the Colonels’ dictatorship in 1974. They also need to redefine their ideological space and differences with SYRIZA, bring in new people, develop new ideas and find persuasive ways of communicating with the public. The centrist To Potami, a newcomer to the Greek political scene, has to consider seriously its viability, as it lost almost one third of its electoral power in this second election that it participated (it had received 6,05% of the vote and 17 seats in the 25 January 2015 elections). ANEL also saw its percentage fall from 4,75% (13 seats) to 3,67% (10 seats), but they are happy to have proven wrong initial forecasts of their not entering parliament, and can hope they will be able to recuperate by their new stint in government. The Golden Dawn increased its percentage only slightly, from the 6,28% and 17 seats it had got in the 25 January elections, which under the strain the Greek people has been under in recent months is a rather encouraging sign for an eventual reversal of this extremist phenomenon. It will be interesting to see whether the SYRIZA victory will have an impact on the results of the upcoming elections in Spain, Portugal and Ireland. For sure, that is the hope of Podemos’ Pablo Iglesias, who shared the stage with Alexis Tsipras at SYRIZA’s final electoral rally in Athens on 18 September.

Christos Mouzeviris was born in December 1977 in Thessaloniki, Greece. Although his artistic inclination was evident from a very young age and he had always demonstrated an interest in pursuing a career in arts, he did not receive the support one would need to professionally engage in the arts in Greece. He studied tourism and…