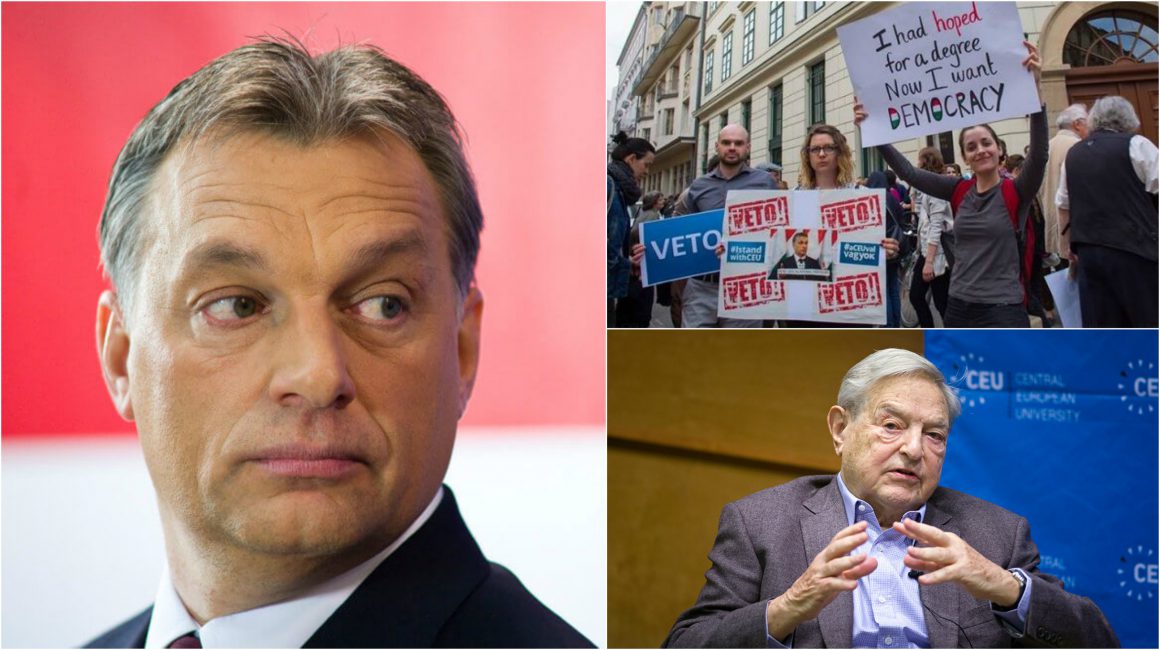 Attila Kálmán is a journalist based in Budapest. He previously worked for HVG and Népszabadság, and currently works at Kett?s Mérce. He writes mostly about politics and education policy.

The protests for saving the Central European University get help from an unexpected ally – Trump.

Viktor Orbán understands politics very well. However, this time it looks like he really misjudged the situation. It certainly seems like he has pushed things too far and has been put firmly in his place. It also seems he’ll have no choice but to back away from the decision that undermines the Central European University.

This is far from the most radical decision he has ever made, but it has raised such severe criticism and from people far more important than himself, that the myth of ʿViktor Orbán as a player in global politics’ crumbled instantly. Where will this all lead? To capitulation in Brussels, to uncomfortable conversations in Moscow, or, perhaps, to Orbán’s downfall?

It cannot be emphasized enough that Orbán’s politics are powercentric. His decisions are based on whether a policy will strengthen or weaken his position. With regard to the question of the CEU, there are four different groups who are challenging his authority: Hungarian protesters, EU politicians, American diplomats and the academic elite. But it is clear that these ʿattacks’ do not carry the same weight when it comes to whether or not the prime minister will reverse the decision.

We can forget about the impact of the pressure applied by the academic elite: intellectuals interest Orbán about as much as a box of matches, for he knows that they influence only a very small group of voters. This is, in part, thanks to the efforts of the governing party, Fidesz, to discredit the intelligentsia.

The impact of demonstrations is also questionable. Orbán doesn’t waver in the face of a crowd of thousands unless one of his loyal research institutes says that potential voters may also take to the streets (see the demonstrations against a proposed internet tax in 2015). In any case, Fidesz doesn’t rely on Budapest to win elections. The demonstrations held in other cities, moreover, attracted only a couple hundred protesters, so they have not caused much alarm either.

Around 80 thousand angry Hungarians are giving weight to the diplomatic pressure which has been placed on the government.

However, the tens of thousands who are protesting the laws against the CEU and NGOs are still important, and it would be unwise to discount them. If there wasn’t such obvious outrage among Hungarians (even though the government maintains that the protesters are mainly foreigners and people who have been flown in from other countries by George Soros himself), then the condemnation of these laws by the EU and the USA could easily backfire, working in Orbán favour. He would be able to claim that ʿthis is just another foreign attack which means to harm Hungary’s sovereignty, we can’t let them get away with it!’ Around 80 thousand angry Hungarians do give weight to the diplomatic pressure which has been placed on the government.

The European Committee has challenged Hungary on other matters before, but the ʿHungarian question’ has been raised more pointedly recently. While Fidesz politicians have grown accustomed to this criticism, and have even been able to profit from it in the past, it seems that the EU has now had enough. Potential sanctions against Hungary have been discussed. And if anything were to bother Orbán, it would be the steady flow of EU money drying up. Sanctions would kill Hungary’s economy and they would deliver a serious blow to the oligarchs of Fidesz as well.

It seems that the CEU scandal, the law on NGOs and the national consultation campaign slandering Brussels has been too much for the European People’s Party (EPP) too. Despite being a part of this parliamentary group, Fidesz has recently received a few unexpected blows from them too. However, the EU machinery reacts very slowly and very cautiously. Were the EU to sanction Hungary too strictly, it would run the risk of pushing Orbán into the arms of his new best friend, Putin.

However, such a blatant break with the EU would likely mean the end of Orbán too. If Brussels were to tighten the leash, Fidesz would lose face in Hungary, and lose the favour with Putin, whom Orbán has recently been courting more openly. So perhaps the Union has more room to manoeuvrer here than it thinks.

The attack against the CEU will likely fail, however, because Orbán had expected the Trump administration, which also considers George Soros a political opponent, to turn a blind eye to this assault upon an American university. However this was a big mistake. Even in Trump’s New World, American interests and the protection of democracy are still more important than political skirmishes. Trump’s administration backed the CEU completely, and Orbán hasn’t yet lost all common sense. He won’t be willing to actually pick a fight with the USA just yet.

So, the Orbán administration will have to reverse their position as quickly as they pushed for the law regulating ʿcheating universities’ in the first place. It’s difficult not to watch with glee as politicians who have previously parroted fake bureaucratic, administrative and legal reasons for closing down the CEU, have had to quickly learn the new party line, which states that there isn’t a problem with the ʿphantom university’ after all.  In the space of just one week, the government has gone from ʿthe CEU can’t operate in this manner any longer’ to ʿwe’ll find a legal loophole’. We can only congratulate them on their impressive mental cartwheels!

Lajos Kósa, the faction leader of Fidesz can say that the CEU is simply an ʿincidental issue’ as often as he likes, and poor László Palkovics, the state secretary for higher education, can try to explain that the Hungarian government never wanted to drive anyone out of the country, but at this point it would be hard to see this struggle as anything other than an ugly political defeat.

Now the battle for its interpretation can begin. Right now it’s difficult to predict who has come out on top, one way or another, and what the consequences will be. A lot depends on the players involved.

For the first time in a long while there is actually something at stake in Hungarian politics.

Is it possible that this was the outcome Orbán expected all along? That he’ll manage to turn the situation to his favour, claiming that ʿGeorge Soros meddled in Hungarian affairs’? Or will Orbán claim that he was only testing the USA and the EU? Will he now try to reclaim control after having successfully proved that no matter what anyone says to the contrary, there is, in fact, a real conflict between Hungarian and western interests?

Or will the opposition parties that remained ineffectual up to this point come out and manage to widen this new crack in the regime’s armour? Will the Momentum party that belongs to the same generation as the protesters manage to ride the wave of demonstrations to a position of power? Will this become a casus belli to prove a wide public dissatisfaction with the Orbán regime and lead to its downfall?

The truth is that anything can happen now. Only one thing is certain: for the first time in a long while there is actually something at stake in Hungarian politics.

This article is republished as part of the editorial cooperation with PoliticalCritique.org.

Attila Kálmán is a journalist based in Budapest. He previously worked for HVG and Népszabadság, and currently works at Kett?s Mérce. He writes mostly about politics and education policy.