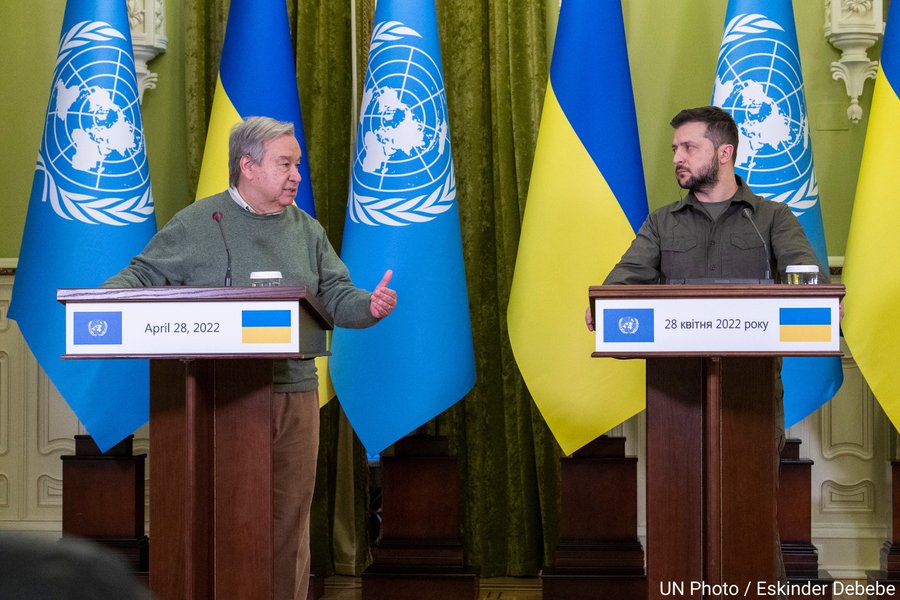 Dr. Kerstin Leitner served with UNDP for 28 years. Among other functions, she was a Resident Coordinator in Malawi and China. After her UNDP service, she was for 2 years Assistant Director-General in WHO, Geneva, in charge of Health and Environment. She retired from this post in 2005 and now lives in Berlin, Germany.

The war in Ukraine threw into stark relief the new patterns of geopolitics: On the one hand, there is the revived West, led by the USA, which began to wind down foreign military actions around 2010. On the other, there is certainly China, still without a strong international following, but making common cause with a number of like-minded countries that deeply mistrust the “retreat” of the USA and hold many grudges against that superpower for its past actions. There are also a number of countries, mostly in Africa and Latin America, but also some Asian countries, which don’t want to side with one or the other. They are done with neoliberalism, which to them is neocolonialism, and forms of international security arrangements, which they see less as a protective, but rather as a mechanism of foreign domination. Strangely, Russia and the EU are out on a limb in this emerging order.

What all groups of countries have in common: the UN and the UN Charter they all have signed up to, which though play only a marginal role in their political outlook and action, their participation in theUN and its work is left to their diplomats and bureaucrats in their respective ministries. Only civil society organisations and scientists are in unwavering support of the UN, while other non-state stakeholders, such as the business community and the established media are doing so only selectively.

Power struggles between the two or three emerging blocks will continue to dominate global politics. They will at times be ruthlessly fought out in pursuit of basically economic interests, even when they are carried out under religious or ideological masks. At the same time, global challenges, like climate change and pandemics, require to put limits and standards in place for economic activities and need to be enforced in order to protect the global commons. WHO is fairly far along this way in its fight against pandemics, but even there, as the COVID-19 experience demonstrated, no effective enforcement mechanisms exist. This is, even more, the case with the UN Framework Convention on Climate Change (UNFCCC) and its Paris Agreement.

Thus the UN secretariat and the whole UN system as global public organisations will have to find new ways and means to motivate member states to a) change economic globalization and b) bring multilateralism in line with global requirements. At the same time, while the UN system is virtually indispensable for all this and more to happen, it is weak and performing far from optimally at present. How can the UN be made fit for the tasks of today and of the future?

First, we need more courageous UN leaders than we have at present. The last two UN Secretaries-General, Ban Ki-moon and António Guterres have been strong in showing the way ahead through the Agenda 2030 with its 17 SDGs and supported through humanitarian assistance to populations suffering from wars and natural emergencies. They have failed, though, to stay in touch with the powers that be and, even if not being listened to, to constantly seek the dialogue and moderate a dialogue between the emerging blocks. They selectively supported one or the other in their respective initiatives, and by doing so, compromised the UN mandate of neutrality and impartiality without offering at least a vision of the world as a better functioning place, beyond issue-specific appeals. There are plenty of previous instances when a Secretary-General spoke up and fell afoul of his “masters”. But that is the courage we need if change is to happen in the long run.

There is, secondly, no way that the P 5 can continue to get away with their irresponsible use of the veto and imposing their political views on other member states. The P 5 need to remember, and if they forget, they need to be reminded by other member states and the UN Secretary-General that they, more than anybody else, have to adhere to the UN Charter and set a positive example. This would include P5 members abstaining from voting on resolutions that concern disputes they are party to, at least when those resolutions are to be adopted under Chapter VI of the Charter (“Pacific Settlement of Disputes”), as per Article 27.3 of the Charter. If they fail to do so, only the votes of the other Council members should be considered valid and any complaint is lodged with the International Court of Justice in The Hague.

Thirdly, many provisions in the UN charter are “can” provisions. This can mean, it is a possibility to act, or: it is permitted to act. We need to interpret these provisions, as permissible and doable; only then will we be able to eventually get to a reform of the security council, get credible participation of all member states in the strategy for a better world, and give the rule of law the upper-hand against the rule of strength.

The Russia-Ukraine war is a major test case of the relevance and future worthiness of the UN, and so far the UN is not making a dent. At least the Secretary-General, with support from other senior officials, seems to be trying. Another upcoming test case will be the exploration of the sea floor in the Pacific Ocean and the Arctic. At least 4 out of the 5 Permanent Members of the Security Council are with their interests pitched against each other there. The UN, through the offices of UNCLOS (UN Convention on the Law of the Sea), is right in the middle of this. China, Russia, and the US are stepping up their military capacities. Will the UN live up to the challenge of preventing future wars? Will it succeed in making good on its mandate of global disarmament and peaceful settlement of disputes between competing national interests? What in 1945 was an ambitious aspiration is a necessity today, not least in order to focus minds, energies, and resources on real global challenges, like climate change and pandemics.

Dr. Kerstin Leitner served with UNDP for 28 years. Among other functions, she was a Resident Coordinator in Malawi and China. After her UNDP service, she was for 2 years Assistant Director-General in WHO, Geneva, in charge of Health and Environment. She retired from this post in 2005 and now lives in Berlin, Germany.