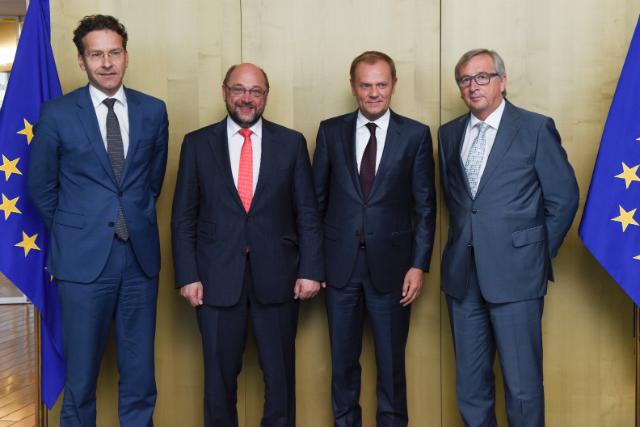 How many presidents do you need to make Europe’s Economic and Monetary Union (EMU) work? Well, five may do it, or rather they better do it. This reference is to the “Five Presidents’ Report” issued in Brussels on 22 June 2015, in the name of European Commission President, Jean-Claude Juncker, in cooperation with European Council / Euro Summit President Donald Tusk, Eurogroup President Jeroen Dijsselbloem, European Central Bank President Mario Draghi, and European Parliament President Martin Schulz. These five, along with the numerous people supporting them, have offered a set of proposals for progressively deepening the EMU in the ten years starting on 1 July 2015 till 2025.

The protracted economic and financial crisis in the EU and the Eurozone, which followed the 2008 global financial crisis but lasted much longer than, say, in the US and is partly still with us, gave plenty of reasons to review the functioning of the EMU and try to correct its shortcomings. This report is in response to those shortcomings and the increasing realization that the EMU cannot work without “stronger economic policy coordination, convergence and solidarity”, as called for by the summit of Eurozone leaders (“Euro Summit”) in October 2014.

The report foresees three periods for the implementation of its proposals, as follows:

The emphasis will be on stronger coordination of economic policies, with greater focus on employment and social issues. Among other things, a system of Euro Area Competitiveness Authorities is planned, as is the launch of a European Deposit Insurance Scheme (EDIS), “which could be set up as a re-insurance system at the European level for the national deposit guarantee schemes.”

Also foreseen is the strengthening of the Eurogroup and unified external representation of the Euro area, for example at the IMF, so that the combined strength of Eurozone and EU member states carries more weight.

This outlines the introduction of more far-reaching and legally founded measures to make convergence more binding, including through commonly agreed upon benchmarks. More detailed measures on how to move from Stage 1 to Stage 2 are expected to be outlined in a Commission “white paper” to be issued in the spring of 2017 and expected to lead to legislative action. A proposed Euro Area Treasury would be the place for collective fiscal decision-making, without taking over the taxation and budgeting prerogatives of member states.

Paradise on Earth, or rather in Europe? Not exactly, but the expectation of the report’s authors is that the “deep and genuine EMU” which would result from the implementation of such measures would “provide a stable and prosperous place for all citizens of the EU Member States that share the single currency, attractive for other EU Member States to join if they are ready to do so.” Also, measures for more parliamentary control, transparency and accountability are expected to increase the legitimacy of the EMU throughout this process.

As the five presidents note in the Introduction to their report: “A complete EMU is not an end in itself. It is a means to create a better and fairer life for all citizens, to prepare the Union for future global challenges and to enable each of its members to prosper.” And quoting from Jean-Claude Juncker’s European Parliament address after he was elected Commission President: “I want Europe to be dedicated to being triple-A on social issues, as much as it is to being triple A in the financial and economic sense.” One can only hope – and stay vigilant to ensure – that the proposed measures, once finally approved and implemented, will bring us closer to this end.

The main points of the report can be found in a European Commission press release, and the full report is also available online. Quotes above are from these two texts.