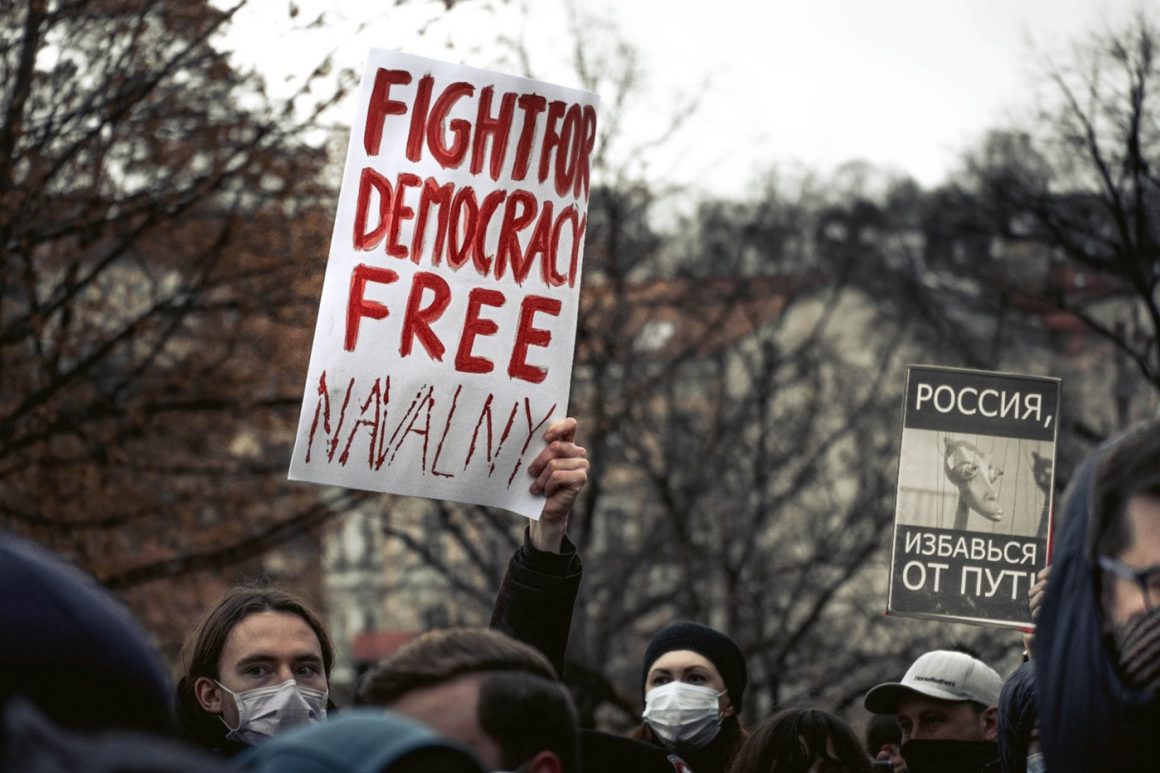 Photo by Ignat Arapov on Unsplash

Originally coming from Russia, Daria holds a BA degree in Regional Studies from the Institute of US and Canadian Studies in Moscow. In 2018, she graduated with a Master’s degree in World Politics and International Relations from the University of Pavia in Italy. Throughout the last years, Daria has gained experience in several international organizations, including the Preparatory Commission for the CTBTO, OSCE Parliamentary Assembly, United Nations Industrial Development Organization (UNIDO), and International Atomic Energy Agency (IAEA). Daria is passionate about gender equality and sustainable development issues. Apart from that, she holds research interests in nuclear disarmament and non-proliferation and is an OSCE/UNODA Scholar for Peace and Security.

A long winter is in full swing in Russia. It pursues those daring to face its freezing breath, keeps people indoors where one cannot spread toxic ideas that winter is harsh, attacks people on the streets with endless snowfalls, and bends their will to resist. This winter has been ruling over Russia for already 20 years. As so often happens, people were initially happy about the first snow, especially after the autumn of the late 1990s with its mess and misery. Little did they know that this winter did not plan to give way to other seasons and has spread across the country like a new ice age. Yet, over the years, more people have realized that it is high time to change the season, for they know that there is always a spring after the winter, a new beginning.

Such a story could be a plot for a new action movie, maybe even a trilogy. Popular culture often portrays fighting against oppressive regimes as a glorious battle between good and evil – Star Wars, Harry Potter, Lord of the Rings, to name just a few. In my generation, we have grown up with images such as Luke Skywalker defeating Emperor Palpatine, or Harry sacrificing his life in the fight with Lord Voldemort. The common theme of these stories – the ultimate victory of good – has become our expectation when it comes to real-life conflicts between opposition movements and authoritarian regimes.

Coming back to today’s Russia, it is certainly more appealing to look at it through the prism of an epic battle and hope for the triumph of democracy. It is hard to resist such comparisons when watching a video of Alexey Navalny drawing a heart in the air to his wife while a judge sentences him to 2,5 years in prison. However, the reality in Russia is not Star Wars, and there will not be a final lightsaber duel between Putin and Navalny.

Russia is indeed moving towards big changes. The end of January 2021 has seen the largest protests across Russia since the summer of 2019, after electoral commissions of Moscow and St. Petersburg rejected independent candidates at the local parliamentary elections. Research conducted by the Carnegie Moscow Center and Levada-Center in 2019 showed that 59% of respondents (19% more than in 2017, following an anti-corruption investigation of Dmitry Medvedev produced by Navalny’s team) want to see comprehensive changes in the country. Opinion polls conducted during 2017-2021 show more readiness for change in Russian society, as well as growing discontent with the Kremlin, systemic corruption, and Putin himself. The protest center has been shifting from Moscow and St. Petersburg to other regions (like the Khabarovsk protests of 2020-2021) in the eastern part of Russia, and Navalny’s support base has been growing.

Nevertheless, the destination of this journey is still unclear as many uncertainties emerge along the way. While wishful thinking tells us that the Russian society is awakening, most Russians still approve of Putin (65% in November 2020) and have little trust in Navalny. Alexey Navalny himself also has some questionable chapters in his past, including his nationalism of the early 2000s. Many Russians in their 50s vividly remember what ‘the democracy’ of the 1990s meant for them – poverty, organized crime, inflation, and terrorist attacks. Putin’s regime still wins for them when compared to those years despite negative trends such as the 2019 pension reform or raising prices. An alarming trend noted by another Levada-Center opinion poll shows a record high perception that Russia is surrounded by enemies – 82%.

Contrary to how it happens in movies, democracy did not fail in Russia during the 1990s because of the Kremlin’s evil plan, it failed because no one properly built and maintained it. After the Soviet Union collapsed, Russians were looking at the Western democracies with hopes for a better life and future, yet they did not realize that for democracy to function everyone would have to contribute. Having no experience with fair elections or proper political parties, most Russians did not attach much value to voting rights or electoral checks and balances. The US and Europe, for their part, did not pay attention this problem either, too busy were they celebrating the victory of democracy. As a result, Russian democracy was neglected both inside and outside, fading soon after Putin came to power.

Such is the Russian reality – far from a movie plot, full of controversies and uncertainties. However, let me not be too pessimistic; after all, there is always a spring after the winter, a new beginning. There are many possibilities on the horizon for Russia, both bright and dark. Either way, the main force to influence its direction is not Jedi-like heroes – it is the Russian youth, those Russians between 18 and 35 inheriting the country in the near future. They have not yet lost faith in democracy since they have not yet lived in one that failed, and it is crucial that they are not isolated from the global community and are empowered to make change possible.

When it comes to describing opposition and Navalny, the loyal servants of the Russian state TV spare no effort in portraying them in the worst light – traitors, Western puppets, NATO collaborationists. However, one of their worst sins is a campaign to corrupt the minds of young people with the ideas of fair elections and democratic governance. If there is one thing that the Kremlin gets right, it is the importance of winning their support. Despite this, the Kremlin has seen little success so far.

In his book ‘The Invention of Russia: The Journey from Gorbachev’s Freedom to Putin’s War’, Arkady Ostrovsky writes that the Soviet Union’s power relied on the strength of its propaganda and lies. During the 1980s the state propaganda became rusty and repeatedly played the same old song, so people just stopped believing it. The ‘Achilles Heel’ of the almighty Kremlin today is its lack of a consistent ideology which is attractive to young people. The aging elites still believe in the power of TV propaganda and patriotic militaristic movements. It does work to a certain extent as demonstrated by the February 2021 opinion poll results from Levada-Center – among young people, around 43-44% still think that the country is going in the right direction (see below).

Source: PRESIDENTIAL RATINGS AND THE STATE OF THE NATION, 04/02/2021, Levada-Center

Unfortunately for the Kremlin, around the same number of young Russians think that Russia is going down the wrong path. Despite all propaganda efforts, almost half of young Russians pay little mind to ideas of war, global domination, and ideological victories. Many of them also have little interest in politics since the current political parties in the Russian Parliament do not represent the real political preferences of the population, especially its younger demographics.

As a result, these young people prefer Instagram stories and YouTube shows to middle-aged TV presenters referring to the victories of great grandfathers and the evil West trying to destroy Russia. Despite having different attitudes towards political involvement, they also have a growing demand for a fairer system with less corruption and more well-being for everyone. The Kremlin is becoming increasingly incapable of offering constructive prospects for personal and professional growth inside Russia (unless one is a member of the ruling United Russia party, in which case all is well).

The current young people between 18 and 35 will shape the future of Russia in the next decade. As opportunities in Russia are shrinking, so is Putin’s support among young Russians. For these Russians to become the driving force of future democratic change, it is crucial to not isolate them from the global community. Russia finds itself in a complex political situation, and to expect it to turn democratic overnight is to repeat the mistakes of the 1990s. Democratic values do not appear randomly – before they materialize into political institutions, they need to have a place in people’s minds. In this regard, the Russian youth holds great potential for transformation through democratic values.

In the wake of new EU sanctions against Russian government officials following Navalny’s arrest, the Kremlin will do everything to portray this as Russia’s further isolation caused by the West. Putin himself understands how the feeling of isolation fuels intolerance and hate in Russian society. We are yet to see the future scope of new restrictions to the freedom of speech in Russia. However, for anybody wishing to see a democratic Russia at peace with itself and the world, it is important to maintain the connection with the Russian people and engage Russian youth in dialogue as much as possible.

Even though we need a realistic approach towards Russia, popular culture also has its place in it as it has a strong influence on people’s minds. In our globalized world, movies and TV series connect people through the same images, jokes, and memes, which is especially important for young people. Social media offers endless space for interactions, and if you can relate to Rick & Morty memes, Mandalorian jokes, or the same old Star Wars, you will not feel isolated from the world. This is the way.

Originally coming from Russia, Daria holds a BA degree in Regional Studies from the Institute of US and Canadian Studies in Moscow. In 2018, she graduated with a Master’s degree in World Politics and International Relations from the University of Pavia in Italy. Throughout the last years, Daria has gained experience in several international organizations, including the Preparatory Commission for the CTBTO, OSCE Parliamentary Assembly, United Nations Industrial Development Organization (UNIDO), and International Atomic Energy Agency (IAEA). Daria is passionate about gender equality and sustainable development issues. Apart from that, she holds research interests in nuclear disarmament and non-proliferation and is an OSCE/UNODA Scholar for Peace and Security.