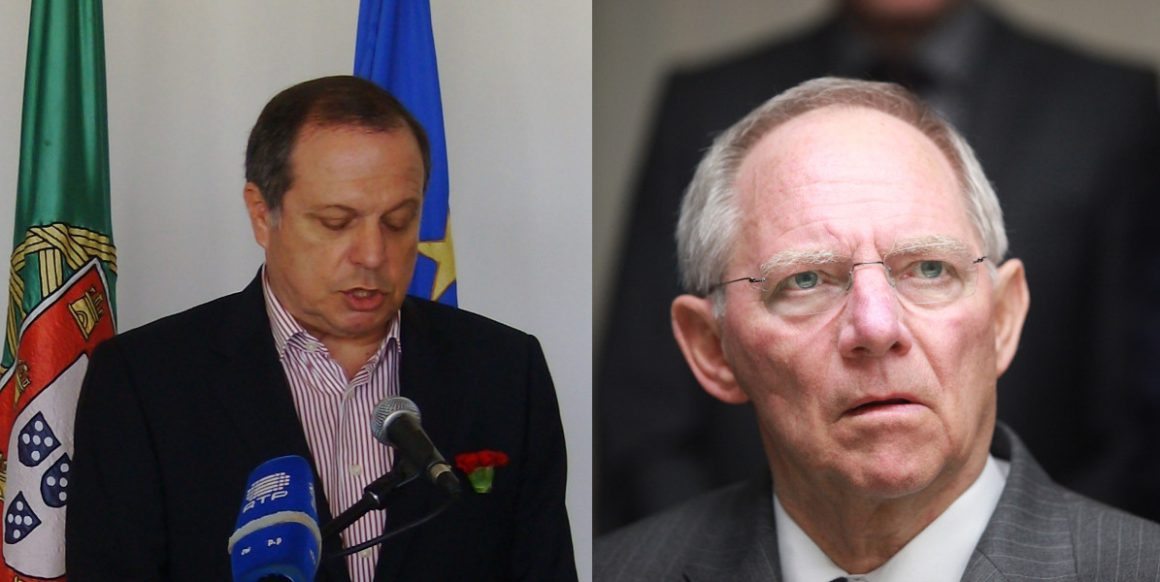 After the back and forth with Brussels, a positive credit rating helped Portugal overcome its state of budgetary limbo, yet Lisbon was “verbally downgraded” by German Finance Minister Wolfgang Schäuble.

Having received what seemed to be a green light from Economic and Financial Affairs Commissioner Pierre Moscovici in mid-October, Portugal’s left wing government drafted a budget for 2017, which was then approved with no surprises in the national parliament.

Favourable votes were cast by the Socialist Party (PS), the Left Bloc (BE), the Communist Party (PCP) and the Green Party (PEV), while the Party for the Animals (PAN) abstained and the right wing, composed of the Social Democrats (PSD) and the People’s Party (CDS), voted against the text.

Despite the draft budget’s parliamentary endorsement, intense negotiations between the parties are still ongoing, as the BE, PCP and PEV all consider the it to be “insufficient”. At stake are alterations to the regime of green receipts as forms of contracts, the income tax brackets and the extension of deductions of expenses for education, among other social and financial matters. The government is trying to curb the deficit — it reached 4.4% of the GDP in 2015 — by increasing taxes on alcohol and tobacco, high-value real estate, vehicles and vacation rentals, as well as introducing a “sugar tax” on soft drinks.

During budget talks, Left Bloc leader Catarina Martins tried to bring back the sensitive issue of debt restructuring. “We noted, as everyone did, that the government accepted that we clearly need to negotiate a reduction of the public debt. It is an important development,” she said last Friday (11 November) at the closing session of the debate on the general state budget for 2017. But Prime Minister António Costa made no further comments on the remark.

The country in numbers

Portugal’s budget deficit ranked as the EU’s third-biggest, behind those of Greece and Spain. According to the European Commission, the country’s deficit is estimated to account for 2.7% of GDP this year and is projected to fall to 2.3% of GDP in 2017.

Portugal’s 2015 deficit peaked due to the €2.2 billion bailout for the Banif bank. In an official declaration, Commissioner Moscovici noted that even without the bank rescue, Portugal would not have complied with the 3% threshold for excessive deficits enforced by the Stability and Growth Pact (SGP) rules.

In contrast, local and regional government and social security funds recorded a surplus. Portugal also saw investment growth of 3.9% in 2015, due to a strong first semester. Private consumption also grew amid a significant fall in household savings.

Nevertheless, according to the Commission’s forecast, private consumption is expected to lose momentum in 2016 and 2017, due to elevated indirect taxes and a slight increase in energy prices.

Investment growth is expected to pick up again in 2017, supported by EU structural funds. However, these important funds were at risk of suspension due to the country’s noncompliance with official deficit targets. Portuguese Finance Minister Mário Centeno travelled to Brussels on 7 November to discuss the issue with Commissioner Moscovici. Having said two weeks ago that the budget only “seemed” to be within the EU rules, Moscovici created a fair degree of suspense. In the end, he did reaffirm the budget’s compliance with the rules of the SGP, which guarantees Portugal access to the EU’s structural funds.

Portugal’s government budget as a percentage of the GDP is expected to decrease to 2.3% in 2017. (Source: Trading Economics & Eurostat)

According to the Commission’s 2016 spring economic forecast, Portugal’s general government gross debt – comprising currency, bills and short-term bonds, other short-term loans and other medium and long-term loans and bonds – has broadly stabilised. It amounted to 129.2% of GDP at the end of 2013, slightly increased to 130.2% of GDP in 2014 and then gently dropped to 129.0% of GDP in 2015. According to Trading Economics, the GDP value of Portugal in 2015 (€179.83 billion) represented a mere 0.32% of the world economy.

The apparent success of the draft budget eased the crucial verdict from Canadian rating agency DBRS: a “low” rate (BBB) and a “stable” outlook. On 21 October Portugal breathed a sigh of relief after DBRS, the only leading rating agency to classify its sovereign debt above junk status, maintained a positive investment grade credit rating. The investment grade is a rating that indicates the credit-worthiness of corporate and government bonds. In other words, it is an assessment of the quality of a State’s public finances, thereby showcasing the estimated risk for potential investors.

This outcome brought great relief to the struggling nation, preserving the much-needed safety net from the European Central Bank (ECB). A downgrade scenario would have hit international confidence in Lisbon’s economic programme, excluding Portugal from the ECB’s bond-buying scheme.

But despite escaping a junk rating from the Canadian agency, Portugal still faces serious challenges. According to the Financial Times, Adriana Alvarado, DBRS’s lead analyst on Portugal, had said, “We are still concerned about Portugal’s high levels of debt in a low-growth environment. But the government has shown a commitment to the EU’s fiscal rules and is taking positive action on the banking sector.”

Long known for his hard-line views on austerity policies and offensive remarks oregarding other countries, Germany’s Finance Minister Wolfgang Schäuble again sparked public debate after claiming that Portugal was on the right path until the socialists came to power in October 2015.

A former member of the Central Committee of the Communist Party, Domingos Lopes, accused Schäuble of being “insolent” towards Portuguese sovereignty. “Mr. Schäuble has no interest in the will of the people expressed in free elections. What matters to him is his own political preference, which means that anything that does not fall into line with his plans is at serious risk of being subjected to financial interventions,” he wrote for the daily Público. “Schäuble descends from the imperial strain that does not accept a reality when it does not serve the interests of German high finance,” Lopes added.

Commenting on Schäuble’s remarks, the President of the Socialist Party, Carlos César, told the news radio station TSF that “the German finance minister is a pyromaniac who presents himself as a firefighter” and, referring among others to German investors in Portugal, stressed that his compatriots do not have the same vision.

The PM Costa chose not to comment directly on Schauble’s provocative statements. He too told RTP news that he “pays attention mainly to those Germans who are not prejudiced and who know Portugal and, hence, know what they are talking about.”

Shadowing the long-lasting Greek turbulence, Dimitrios Papadimoulis, a vice-president of the European Parliament and head of the Syriza party delegation, joined the condemnations of the German finance minister. “It is deeply disappointing to witness a single finance minister trying to block positive developments in another member state,” Papadimoulis said. “Schäuble’s stance goes against some of the fundamental values of the European Union, such as solidarity and collective decision-making.”