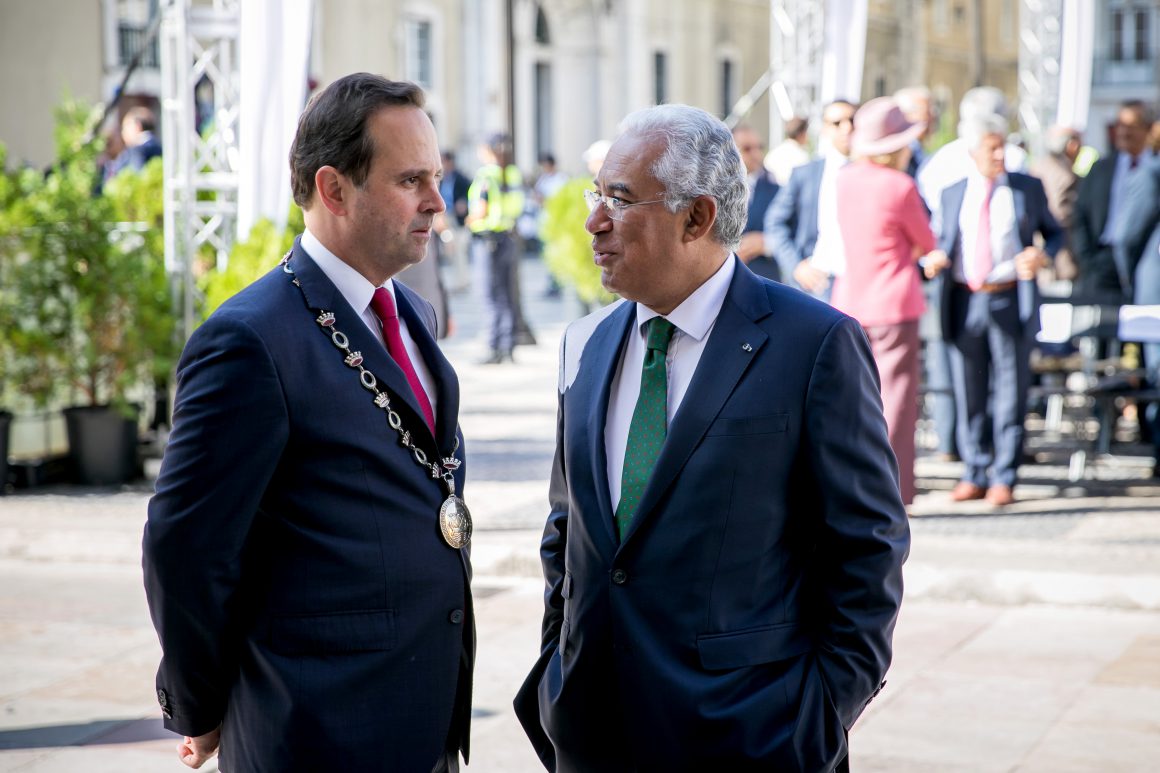 The current left-wing government in Portugal formed by the Socialist Party, the Left Bloc and the Communist Party, was given a popular endorsement at the municipal elections on 1 October. Aiming at the seats for new mayors in 308 city halls and 3,085 parishes throughout the country, the politicians promised affordable housing, better quality public transport, health and education.

In what the Spanish daily El País called a “bulldozing”, the Portuguese Socialists will now dominate a record 158 of the country’s 308 town halls. While keeping Lisbon, they also gained nine out of the 15 most populous cities.

Overall, the Socialist Party (SP) won 37% of the vote at national level. It was followed by the Social Democrats (PSD) with 16% of the vote. The Communist Party gained 9.7%, which put it well ahead of the Left Bloc on 3.2%. The biggest loser was the PSD, a centre-right opposition party, which was pushed down into third place in both Lisbon and Porto, prompting the resignation of its leader, former Prime Minister Pedro Passos Coelho. As for the PSD’s closest ally, the CDS-People’s Party, it scored an unusual 20.6% in Lisbon. Nonetheless, the real winner of the election was a robust abstention rate of 45%.

The Communists recorded their worst ever local election results, losing ten towns halls to the Socialists. The Left Bloc’s achievement was far from spectacular but it did manage to be represented in the capital.

As the Socialists are forming a government with both the Communists and the Left Bloc, António Costa, the prime minister and secretary-general of the Socialist Party, reassured continuity of good relations: “Our victory is not a defeat for any of our parliamentary partners,” he said, adding that “these results strengthen the SP, but also the parliamentary majority that has brought change.” The President of the Socialist Party Carlos César also guaranteed that the election outcome would not interfere in the good relations between the parties that support the government.

The municipal elections are considered an indicator of the popular view of the government’s performance: a significant portion of the population appears satisfied, to the detriment of the current opposition, with almost two years to go before the general election in 2019.

On 15 September, the rating agency S&P raised its forecast for Portugal’s economic growth from BB+ to BBB-, thus upgrading the country’s rating to “investment-grade” status with a stable outlook. This is an additional booster for the ruling government, but the opposition has claimed recognition for its own contribution while in office.

“It allows a much vaster array of investors to have Portuguese debt in their portfolios. It also allows private debt to benefit from better financing conditions, and this is very relevant for Portuguese banks,” Portuguese Finance Minister Mário Centeno told Bloomberg.

Until now, Portugal was hanging by the thread of a single investment-grade rating, granted by the Canadian DBRS, which has allowed the country to have access to the European Central Bank (ECB) bond-buying programme. With the additional favourable grading from S&P – one of the “Big Three” – Portugal is expected to attract more investment and reduce financing costs due to the resulting fall in interest rates to their lowest point since late 2015.

While not having changed their rating, the other two large rating companies, Fitch and Moody’s raised their outlook to “positive”, possibly indicating that they may follow S&P in the near future.

“This is a very positive development, it shows that the economic recovery in Portugal is on the right track, that the budget deficit is on a downward trajectory, and this is recognised by rating agencies,” said Valdis Dombrovskis, the European Commission Vice-President for the euro.

Portugal’s efforts were also recognised by the Financial Times, which described the recovering country as a “rare beast” in the eurozone.

The S&P statement came while the Portuguese government was undergoing its 2018 budgetary talks. The financial guiding document for the coming year will be presented on 13 October for final voting on 28 November.

According to the winter forecast issued by the European Commission, Portugal’s economy grew by an estimated 1.3% in 2016 and real GDP growth is forecast to reach 1.6% in 2017 and 1.5% in 2018. Moreover, the deficit is projected to decrease to 2.0% of GDP in 2017, mainly due to a one-off operation (the recovery of a guarantee to Banco Popular Português worth 0.25% of GDP).

Additionally, the Portuguese government reported a €3.7 billion deficit in 2016, equivalent to 2% of GDP. Figures came well below a 4.4% gap in 2015 and a 2.5% deficit agreed with the European Union (EU). It is the lowest budget gap since the end of Portugal’s dictatorship in 1974, and below the 3% maximum allowed under EU rules. The improvement is largely due to lower capital expenditures and higher social security receipts.

In March 2011, with interest rates spiking to unsustainable levels, Portugal received the €78bn bailout from the EU, the ECB and the International Monetary Fund, as well as bilateral loans, in exchange for a packet of reforms, including cuts in public spending and tax hikes.

By then, Greece and Ireland had already received their own austerity packages and, given the contradiction in all these economies and the fear of contagion, interest rates on Portuguese ten-year debt had risen further, reaching an alarming 17% in early 2012. By then, ten-year bonds yields (or interest rates) were downgraded to BBB-, otherwise known as junk.

Since taking office at the end of 2015, Prime Minister Costa has been expressing his intention to reverse some of the measures introduced during the bailout.

Although Portugal exited the three-year international aid programme in 2014, opening the way for an improvement of the country’s economic performance, non-performing loans (NPL) are still a hurdle haunting its banking system. 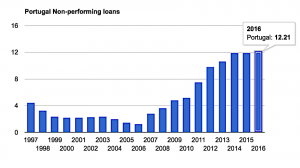 Non-performing loans as a share of all bank loans in Portugal (Source: The Global Economy)

Last year, Portugal recorded a public debt equivalent to 130.4% of the country’s GDP – still a high value that requires some work, yet the forecast for 2017 is a public debt of 127.7%, according to Finance Minister Centeno.

“Many banks have high levels of NPL, but that does not mean that they are in crisis, only that their profitability is low because these loans do not generate income,” said the Managing Director of the European Mechanism of Stability Klaus Regling, who considers Portugal a successful case.

Nevertheless, the recapitalisation from the Caixa Geral de Depósitos (CGD) bank is likely to be added to public debt against people’s will, thus hampering Portugal’s ability to ease what is currently its biggest burden.

Portugal has turned its economy around, slashing the deficit. This should boost investor confidence, but rating agencies won’t take Lisbon off the junk pile.

After the back and forth with Brussels, a positive credit rating helped Portugal overcome its state of budgetary limbo, yet Lisbon was “verbally downgraded” by German Finance Minister Wolfgang Schäuble.