A decade ago I was invited to a meeting of the newly founded Pirate Party in Sweden. It was intriguing, since I was fed up with the traditional right-left party politics, which keeps falling back to questions of identity rather than ideology. Having started out as an anti-copyright movement, the Pirate Party has definitely become something beyond a radical protest party. Its agenda is quite simple: transparency, freedom of information, direct democracy, public participation and decriminalization of narcotics. 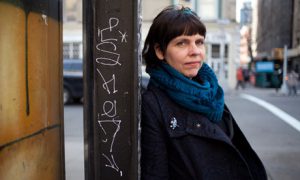 Ahead of the Icelandic election that will take place on October 29, the Pirates look forward to at least quadruple their presence in the parliament. With only 5% support and three MPs, the Pirates have already led a successful term. Former spokesperson of Wikileaks and the Icelandic Pirates’ figurehead Birgitta Jónsdóttir defines herself as “poetician” (poet+politician). Her vision for Iceland is very different from that of other political parties. The party currently stands at over 22% in opinion polls and she might have a major impact by becoming the parliamentary speaker in the next term.

The Icelandic Pirates had forced Prime Minister Sigmundur Davíð Gunnlaugsson to resign after it was revealed in the Panama Papers that his wife owned an offshore investment company with claims on Iceland’s failed banks, which constituted an evident conflict of interest for the former prime minister. The week after the prime minister stepped down, the polls showed Pirates at 43%, after a long march reclaiming a new record every second week for over a year.

The Pirates set out to bring a new approach to party politics also elsewhere in Europe. Vice-President and Net Political Spokesperson of Pirate Party Sweden, Mattias Bjärnemalm, says “I cannot emphasize enough how important it would be for the pirate movement globally to have a government with pirate ministers. Today before the elections, they are standing with more parliamentary experience.”

Julia Reda, a Member of the European Parliament and the president of Young Pirates of Europe (YPE), the European federation of Pirate Party youth organizations,  states:

“The Icelandic Pirates are not just carried by the hopes of the electorate, they have been convincing in their day-to-day parliamentary work. I think they are a great role model for Pirate Parties in other countries, where voters may want to give the local Pirates a chance. But may have doubts about their effectiveness in parliament.”

Getting elected to the Abgeordnetenhaus, Berlin’s state assembly in 2011,  the German Pirate Party were the first Pirates to ever enter state parliament. However, partially due to internal divisions, the public support in the party fell dramatically in the Berlin’s state election this year. With 1.7% of the votes, the party lost its seats in the assembly.

Over the years, when I had been talking to people about the Pirate Party, most responses revolved around “they too have no ideology” or “it’s just another radical protest party.” Yet in Iceland, the Pirates have successfully led campaigns to abolish blasphemy laws, declare asylum for Edward Snowden, campaign for Chelsea Manning, and they have been speaking up against injustice and dysfunctional systems; there is more to the party than a mere protest voice.

The electoral agenda of the Pirates in Iceland promises an adoption of a new constitution, ensuring just distribution of the wealth generated through natural resources, re-establishing free health care, increasing public participation in decision-making, restoring trust and tackling corruption. A strong set of promises on the road to sustaining liberties and empowering the people.

“We are on the cusp of a new wave of liberal politics, where corruption and abuse of power is challenged and systems reformed to serve the needs of the public, rather than the needs of powerful elites.”

Even though all party-groups from right to left have Europe-wide associations, the Pirates might have the highest interconnectedness thanks to their focus on digital communications and social media. This weekend in Reykjavik, Iceland’s Pirates will welcome the support of Pirate Party representatives from over 30 other countries.

They are pioneers in terms of structure, like no other political movement before. As a Europe-wide grassroots movement, the Pirates are validating themselves through elections in the eyes of the electorate, while refusing to be categorized in traditional terms.

For those staring oblivion in the face, betting on the chances of political change must feel like one more desperate jerk of the lever on the slot machine.