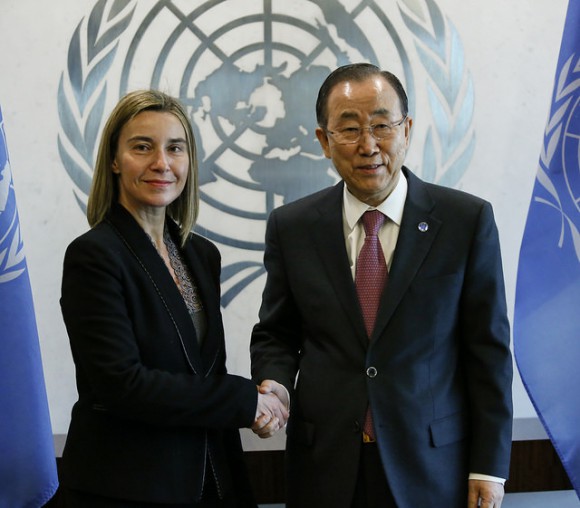 The first official visit of the European Union High Representative for Foreign Affairs and Security Policy / European Commission Vice-President Federica Mogherini to New York on 8 and 9 March included, among high level meetings, a statement made at the United Nations Security Council (UNSC) on 9 March regarding cooperation between the EU and the UN. The speech reflected the current European foreign policy priorities: putting Libya “back on track”, fighting terrorism in all its forms and across regions, and saving the lives of migrants crossing the Mediterranean into Europe.

Libya is a top priority and a deal should be reached in a matter of days, according to Mogherini. The European Union is ready to give the country everything it needs to rebuilt itself, as soon as the various factions reach a political compromise towards forming a unity government. Hopes that such a government will address terrorism, uncontrolled migration and regional instability are the motivation for EU’s support.

“Da’esh”, the pejorative name assigned to the self-proclaimed Islamic State of Iraq and Levant (ISIL or ISIS), was the next item on Mogherini’s foreign policy agenda and referred to it as the main challenge currently facing Europe and the world. The EU High Representative called for international cooperation to prevent the group from achieving its stated goal of forming a caliphate out of the Levant and draw Western armies into a war whose final showdown will take place at Dabiq, Syria. The way to address this, according to Mogherini, is by encouraging public debate that speaks against the group’s narrative. 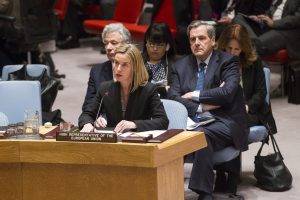 Saving lives and achieving a peaceful future, as the principal goal of EU-UN and possibly African Union collaboration, will also be done by “facing the phenomenon of migration”, according to the Head of EU’s diplomacy. Migration has been a key issue on the European agenda in the past years, more so as the number of people dying in the Mediterranean Sea while trying to cross from Africa into Europe has reached tens of thousands and is steadily growing. The importance of achieving a solution in Ukraine that would guarantee the country’s territorial integrity, as well as reaching a two-state solution to the Israeli-Palestinian conflict were issues also covered by the EU High Representative.

Her statement, however, paid little or no attention to poverty, inequality between people, or climate change, concerns that are at the center of the current UN debates. The benefits of migration were also overlooked, as were the root causes of violent extremism. Of course, one could claim that such “soft security” topics were more appropriate for other fora, like the UN General Assembly, rather than the Security Council that Ms. Mogherini addressed this time. Nevertheless, the securitization of European foreign policy discourse is, in fact, gathering pace, as the EU is contemplating the reinforcement of its defense structures to stand up to Russia and other threats.