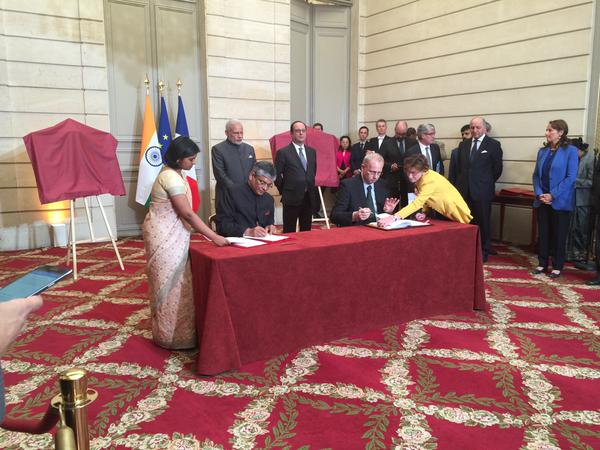 On his first official trip to Europe, Indian Prime Minister Narendra Modi visited France and Germany from 10 to 14 April. His charm offensive had a central economic rationale, promoting India as an attractive investment and technology transfer destination through his “Make in India” campaign, but also buying from the European market some things that India needs.

First destination for Mr. Modi was France, from 10 to 11 April. With nuclear energy and defence at the top of the agenda, the visit concluded with India’s ordering 36 Rafale fighter jets, amounting to more than 5 billion euros of business for manufacturer Dassault. There was also a decision to go ahead with the installation of several French nuclear reactors in Jaitapur, Maharastra state in India. Several agreements were signed in the presence of Prime Minister Modi and French President Hollande at the Indo-French Economic Forum on 10 April. A visit to the Airbus facility in Toulouse on 11 April opened possibilities for “Make in India” cooperation in this sector too.

India was this year’s partner country and “Make in India” a central theme at the Hannover Messe or Hannover Fair, which Mr. Modi inaugurated together with German Chancellor Merkel on 12 April. In his address to the Indo-German business summit on 13 April, and in meetings with numerous German business leaders, Mr. Modi invited them to help realize India’s great economic potential, assuring them of his government’s full cooperation. At a visit to the Berlin Hauptbahnhof or Central Train Station Mr. Modi discussed rail technologies and the modernization of the Indian Railways.

Interesting to note that Mr. Modi’s European purchases, especially the Rafele deal, means that developing and poor (per capita, at least) India is supporting developed France with an injection of hard-earned cash, which is certainly received with gratitude at a time of relative stagnation and high unemployment in Europe. This can also be partly understood as balancing accounts, in view of France’s several billion euros of trade deficit with India. It underscores a mutually beneficial relationship between the two countries, which have similar geopolitical positions and attitudes, despite their big population differences. Second to other bigger powers, like the US, China, Japan and Germany, the two want to remain relevant and regain lost ground through economic and technological cooperation between them.

The same cannot exactly be said about Germany and India, whose relations may up to now have lacked the strength and ambition of Germany – China cooperation. Nonetheless, the prospect of German companies opening up shop in India is certainly attractive to the governments and the private sector of both countries, with great scope for expansion. If Mr. Modi’s vision of a business-friendly India, with much reduced red tape, materializes in practice, it may well be very good news for growth and employment on both the Indian and European sides.