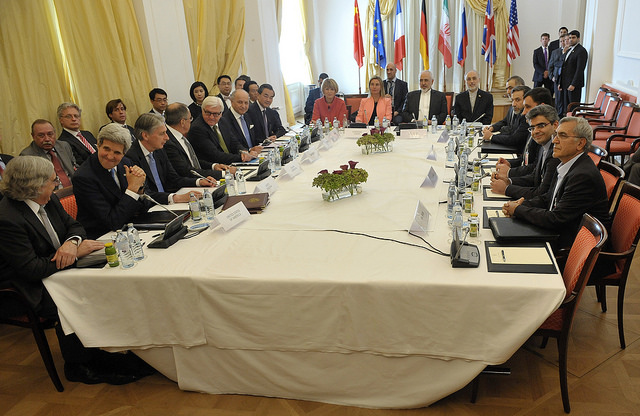 After 18 continuous days of talks, major world powers and Iran reached a historic deal on 14 July in Vienna. The arduous discussions mark the end of 13-year old gridlock over Iran’s nuclear ambitions and will provide sanctions relief for Teheran’s battered economy.

While Israel’s Benjamin Netanyahu unabatedly dismissed the deal as nothing more than a “historic mistake”, the powers that be – the five permanent members of the UN Security Council (France, the UK, Russia, China and the United States) plus Germany – hailed it as a success and a step forward in normalizing relations with the Islamic Republic.

The Vienna talks concluded with a long awaited favour swap: Iran’s controversial nuclear programme in exchange for lifting international oil and financial sanctions. This protracted outcome could spell the end of decades of wearisome conflict between the West and Iran. Under the deal, Iran is expected to open up its nuclear facilities to the International Atomic Energy Agency for inspection. The agreement will take months to enact and its implementation will have to be verified in order for the first sanctions to be lifted. But once that is done, Iran will gain access to some $100 billion in frozen assets. From then on Iran is expected to resume the sale of oil at the same output levels as before the sanctions were enforced.

The agreement was quickly claimed as a success by leaders from both sides of the negotiation table. Still, after decades of hostility and bitter relations between the two camps we can now expect to see a backlash at home from hardliners who consider the deal to be a surrender to the other side.

President Obama, who had long promised that a deal would eventually be reached and that the threat of military conflict with Iran would be averted, registered a momentous political victory. Years of backdoor diplomacy seem to have finally paid off, and the Iranian leader is no less content. President Rouhani, elected with the promise of reducing his country’s isolation, rejoices over the hope of ending years of sanctions and isolation.

EU’s foreign policy chief, Federica Mogherini, who facilitated the negotiations, joined in applauding the landmark deal by calling it “a sign of hope for the entire world.” Reviewing the laborious process, Ms. Mogherini confessed to the strenuous work that made the deal possible: “No one ever though it would be easy. Historic decisions never are. But despite all twists and turns of the talks, and the number of extensions, hope and determination enabled us to overcome all the difficult moments. We have always been aware we had a responsibility to our generation and the future ones.” She concluded the joint statement with Iranian Foreign Minister Javad Zarif by “calling on the world community to support the implementation of this historic effort.”