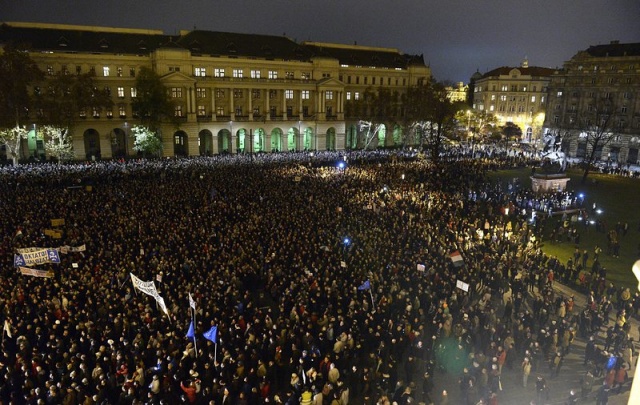 The streets of Budapest on Sunday, 1 February, were full of people demonstrating against their government. The policies of Viktor Orban, the Hungarian Prime Minister, are widely seen as pro-Russian. The timing of the demonstration was also chosen to maximize the reach of their message, as Angela Merkel was expected in Hungary in order to address the government’s commitment to EU sanctions against Russia.

The demonstrators were bearing EU flags and shouting “Orban, scam” outside the Hungarian parliament. The organisers called on the German chancellor to halt their prime minister’s strengthening of ties with Russian president Vladimir Putin, who will also pay a visit this month. Hungary’s opposition politicians, intellectuals and activists also saluted the pro-EU demonstration, which concluded with the Ode to Joy, the EU anthem.

This has not been the first anti-Orban demonstration. There has been a series of mass protests against the Fidesz government since it was forced to abandon a proposed tax on internet usage in October. Although Mr Orban’s party has lost one-third of its support in the past three months, according to opinion polls, the liberal and leftwing opposition have not exhibited the analogous increase in their polling numbers. The far right Jobbik party, which got 20% in last year’s elections, remains the second-largest party in the country. Later in February the incumbent party will face an important electoral test in a by-election in the western city of Veszprem.

Angela Merkel arrived in Budapest on Monday, 2 February, and held a joint press conference after her talks with Orban. It did not look that their meeting had gone well. 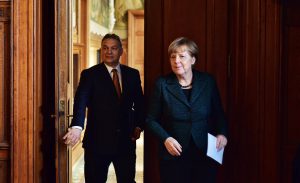 “Germany will not support Ukraine with weapons,” Ms Merkel said in response to reports that the US contemplates arming Ukrainian government forces. “I am firmly convinced that this conflict cannot be resolved militarily.” The elephant in the room, the sanctions on Russia were not touched upon substantially in the press conference, an indication that there had not been agreement on the subject. The tension between the two leaders was vented when Mr Orban’s internal policies were mentioned. “I pointed out that, even if he has a very large majority as Prime Minister of Hungary, it’s very important in a democracy to appreciate the role of the opposition, the role of civil society, the role of the media,” Ms Merkel said. This was a reference to Orban’s move against the freedom of the press, and the limiting of NGO’s activities, as well as changing electoral laws in his own favour. “Not all democracies have to be liberal,” Mr Orban responded. “Those who say that democracy is necessarily liberal are trying to put one school of thought above the rest, and we’re not going to grant that privilege.”

Following Ms Merkel’s visit, Vladimir Putin is also scheduled to meet the Hungarian Prime Minister. This move violates the EU’s common stance against Russia and the agreement among EU leaders to cease bilateral meetings with the Russian leadership. Nevertheless, Mr Orban’s ties with Mr Putin are well known. He has been among the most prominent critics of the sanctions against Russia and last January signed a €10 billion nuclear deal with the Russian President. For the upcoming meeting economic matters are again on the agenda. Mr Orban has said he would negotiate a new gas supply contract with Moscow.