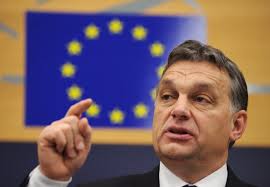 On 28 April, while addressing a crowd in the southwestern Hungarian city of Pecs, Prime Minister Viktor Orban came out in favour of reinstating the death penalty. According to the Hungarian state agency MTI, Orban acted in response to the murder of a tobacco shop keeper from a nearby town. “The death penalty should be put on the agenda in Hungary,” the Hungarian leader boldly stated. “Hungary will stop at nothing when it comes to protecting its citizens.”

“The death penalty should be put on the agenda in Hungary,” the Hungarian leader boldly stated. “Hungary will stop at nothing when it comes to protecting its citizens.”

The statement quickly drew criticism from both home and abroad with a harsh reproval from the President of the European Commission, Jean-Claude Junker. During a joint press briefing with President Kolinda Grabar-Kitarović of Croatia, Mr. Junker urged Viktor Orban to abandon his stance on capital punishment and “immediately make clear that this is not his intention,” adding that “if it would be his intention, it would be a fight.” He called on the Hungarian leader to respect the Charter of Fundamental Rights of the European Union which forbids the death penalty in all of its member states.

With the fall of communism in 1989, Hungary banned the death penalty and joined the European Union in 2004. Upon becoming a member state, it vowed to uphold the bloc’s Charter of Fundamental Rights. The permanent ban on the death penalty is enshrined in both the Charter and the European Convention on Human Rights of the Council of Europe, documents with which all member countries must comply.

It is not the first time Mr. Orban finds himself at loggerheads with the EU institutions. Ever since he came into office almost five years ago, his policies have put the country on a collision course with the European Union. In a questionnaire to be sent to 8 million citizens, Orban is appealing to the public for consultation concerning a new immigration policy that would allow the government to detain illegal immigrants. Additionally, he has proposed a plan for those migrants in jail to cover the costs of their own detention.

From the newly adopted constitution in 2011 – subjected to controversy and concerns over limitations on fundamental human rights and rule of law – to the short-lived internet tax law and its more recent immigration policy, Hungary’s blend of populism and nationalism took Europe by storm. Viktor Orban famously said that he wants Hungary to become an “illiberal-democracy” akin to those of China and Russia. He made this point very clear when he went on to host Russian President Vladimir Putin at a time when the EU was locking horns with Moscow over the crisis in Ukraine.

His political moves speak of a man staunchly anti-European, defiant and determined to benefit from the surge in right-wing nationalism across the continent. As a European head of government, Mr. Orban’s emphasis has not been so much on preserving a functioning democracy as it has been on creating a strong state and an unchallenged hold on power for himself and the Fidesz ruling party. This is unlikely to change with Jobbik, the extreme right-party, which is giving Mr. Orban a run for his money. In order to make the cut and keep winning votes, Orban’s party will have to swing even further to the right.

His political moves speak of a man staunchly anti-European, defiant and determined to benefit from the surge in right-wing nationalism across the continent.

Although still very much a free society by international standards, Hungary’s country rating has taken a tumble, according to Freedom House. The trend is worrisome, threatening everything from freedom of the press to the independence of the courts. NGOs, especially those critical of the government, are the target of ever-increasing state interference. In May of last year, non governmental organizations sponsored by the Norwegian Civic Fund were blacklisted by the government, citing alleged political affiliations. Investigative journalists have also seen better days with many complaining that their offices have been raided by police from the National Bureau of Investigation. Furthermore, Deputy Prime Minister Zsolt Semjen labeled them as “traitors” for “working together with the foreign intelligence services.”